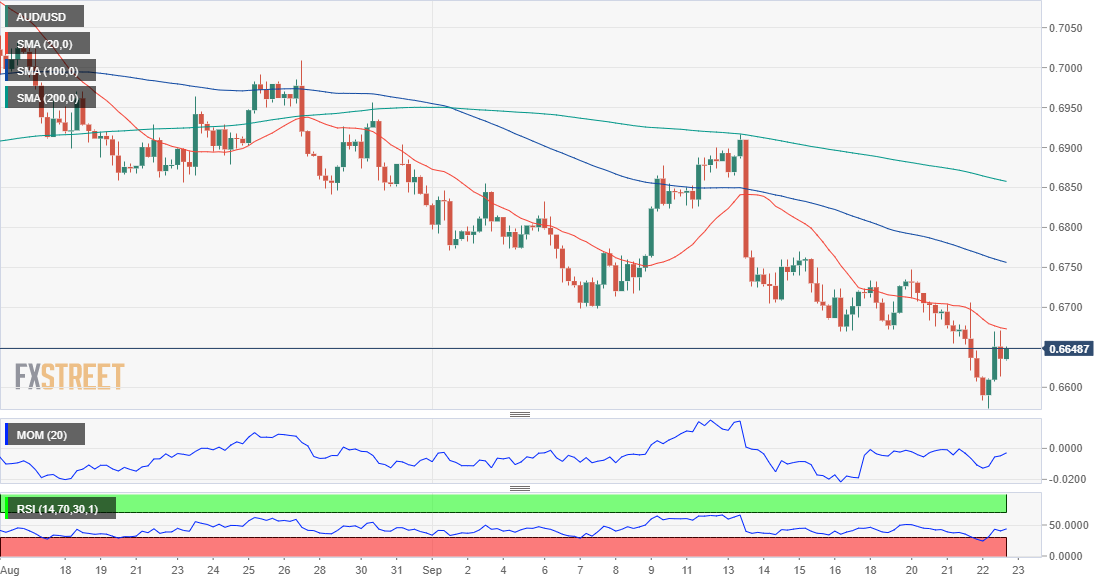 The AUD/USD pair fell to 0.6573, its lowest since May 2020, but managed to recover some ground and finished Thursday with modest gains around 0.6650. The advance took place early in Europe and after the Bank of Japan intervened in the FX market, pushing the dollar down against all of its major rivals. Following the event, the pair topped at 0.6670, retreating afterward on the back of risk aversion and spending most of the last trading session of the day in consolidation mode.

Early on Thursday, S&P Global will release the preliminary estimates of the Australian September PMIs. Manufacturing activity is expected to have improved, as the index is foreseen at 54 from 53.8, although services output is seen contracting to 47.7 from 50.2 in the previous month.

The AUD/USD pair does not seem to have already found a bottom. The daily chart shows that technical indicators maintain their downward slopes within negative levels, while the 20 SMA accelerated its decline, now offering dynamic resistance at around 0.6770. The longer moving averages, in the meantime, keep heading south well above the shorter one.

In the near term, and according to the 4-hour chart, the risk skews to the downside. A bearish 20 SMA rejected bulls, now providing resistance at around 0.6670. Technical indicators corrected extreme oversold conditions but turned flat below their midlines, reflecting the absence of buying interest.