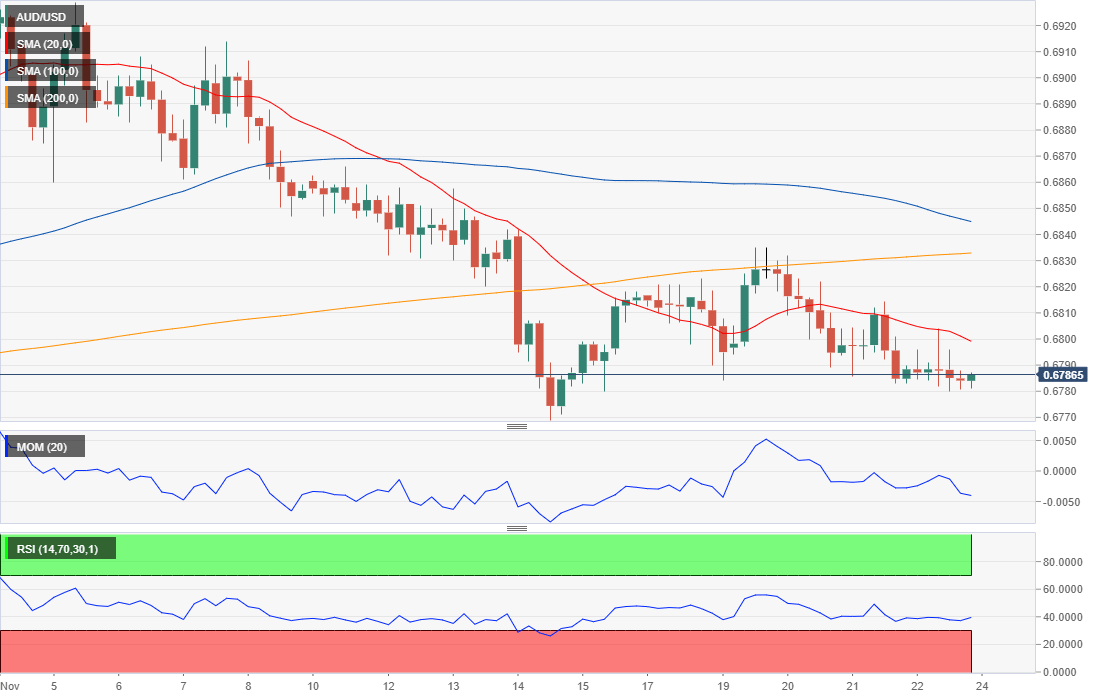 The AUD/USD pair has fallen for a third consecutive week, ending this last one at 0.6785. Pressure on the Aussie surged mid-week, following headlines indicating that chances that the US and China could sign phase one of a trade deal this year were unlikely. On Friday, hopes resurged following optimistic comments from the leaders of both economies, but Australian data weighed more, keeping the upside limited. The preliminary estimate of the November Commonwealth Bank Services PMI came in at 49.5, well below the 53.4 expected, while the Commonwealth Bank Manufacturing PMI printed at 49.9, better than the 49.8 expected but below the previous 50. Both indexes are now in contraction territory, adding pressure on the RBA to cut rates further, hence, pressuring the Aussie.

The Australian macroeconomic calendar has nothing to offer at the start of the new week, as the first event scheduled in the country is a speech from RBA’s Governor Lowe early Tuesday.

The AUD/USD pair is bearish according to the daily chart, as selling interest surged on an approach to a bearish 100 DMA, which capped the upside throughout the week. Technical indicators in the mentioned chart have pared their declines, but remain well into negative territory, in line with further slides ahead. Shorter-term, and according to the 4-hour chart, the risk is also skewed to the downside as a bearish 20 SMA contained advances, while technical indicators hold directionless within negative levels.

Gold holds gains above $1,750 as US GDP hogs limelight

Gold price is focusing on establishing above the critical resistance of $1,750.00 in the early Asian session after a solid recovery from $1,746.00 witnessed late Friday. Broadly, the precious metal is looking to recapture the three-and-a-half-month high at $1,786.54 amid a broader strength in market mood.