The AUD/USD pair fluctuated in a 70-pip range this week and struggled to make a decisive move in either direction. Despite the upbeat market mood, the AUD struggled to gather strength against the greenback amid heightened geopolitical tensions between Australia and China. Although the pair advanced to its highest level since June 11th at 0.7002, it returned to 0.6940 area to end the week virtually unchanged.

At its monetary policy meeting held on Tuesday, the Reserve Bank of Australia (RBA) decided to keep its official cash rate (OCR) unchanged at 0.25% as expected. In its policy statement, the RBA reiterated that it's prepared to scale up its bond purchases again if needed. "Conditions have stabilised recently and the downturn has been less severe than earlier expected," the RBA noted. Nevertheless, AUD/USD's reaction to the RBA's policy statement was largely muted.

Earlier in the week, the AiG Performance of Services Index released by the Australian Industry Group came in at 31.5 in June to show ongoing contraction in the service sector's economic activity.

Meanwhile, Australian Prime Minister Scott Morrison on Thursday announced that they will be suspending the extradition treaty with Hong Kong amid concerns over the imposition of the national security law. Morrison further added that they will look at new incentives and arrangements to attract export-orientated Hong Kong-based businesses to relocate to Australia.

Responding to this announcement, the Chinese embassy in Australia noted that they strongly disapprove Australia's interference in Hong Kong affairs and said Australia's decisions were based on "groundless accusations and measures."

On the other hand, the ISM Non-Manufacturing PMI in the US rose sharply from 45.4 in June to 57.1 in July and beat the market expectation of 50.1 by a wide margin. Other data from the US showed that the weekly Initial Jobless Claims decreased by 99,000 to 1,314,000 in the week ending July 4th.

Next week, the Australian economic docket will feature National Australia Bank's (NAB) Business Confidence and Business Conditions on Tuesday. More importantly, the Australian Bureau of Statistics will release the June labour market report. Markets expect the Unemployment Rate to tick down to 7% with the Employment Change coming in at -100,000. Other data of interest will include Retail Sales, Industrial Production and Gross Domestic Product data from China on Thursday.

Looking at the US economic docket, Industrial Production, Retail Sales and UoM Consumer Sentiment Index data seem to be carrying the potential to be market movers in the second half of the week.

On the daily chart, the Relative Strength Index (RSI) indicator is pushing lower toward 50, suggesting that AUD/USD continues to lose its bullish momentum. Moreover, the 100-day and the 200-day SMAs continue to move sideways below the price, confirming the near-term neutral outlook.

The FXStreet Forecast Poll confirms the view that AUD/USD is unlikely to break above 0.7000 in the near-term with the 1-week outlook pointing out to a bearish bias with the target of 0.6930. The 1-month and the 1-quarter outlooks both paint a bearish/neutral picture for the pair with both time frames targeting prices below 0.6900. 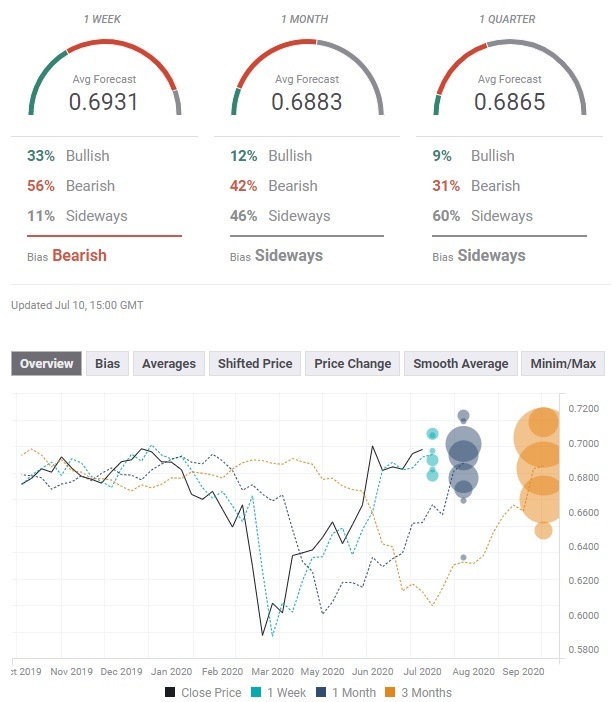