Three steps forward, one step back – that has been the path of the dollar, especially against commodity currencies, since the world became aware of the Omicron covid variant. Investors seek the greenback as a safe-haven currency. The first significant release after Omicron came to light could set another move higher. Regardless of the outcome.

As America's largest payrolls provider, ADP has a gauge on the labor market – and therefore it impacts markets even if the figures are poorly correlated with the official Nonfarm Payrolls data. In turn, the NFP is critical for the Federal Reserve's decision to accelerate the pace of its tapering.

The Fed embarked on a gradual reduction of its $120 billion/month bond-buying scheme, which is currently set to end by mid-2022. It could finish it ahead of schedule due to a vibrant labor market and higher inflation.

Expectations stand at an increase of 525,000 private-sector jobs in November, a decrease from 571,000 reported In October. However, ADP & NFP data have not beaten expectations three times in a row since March. That means it could disappoint this time around too. 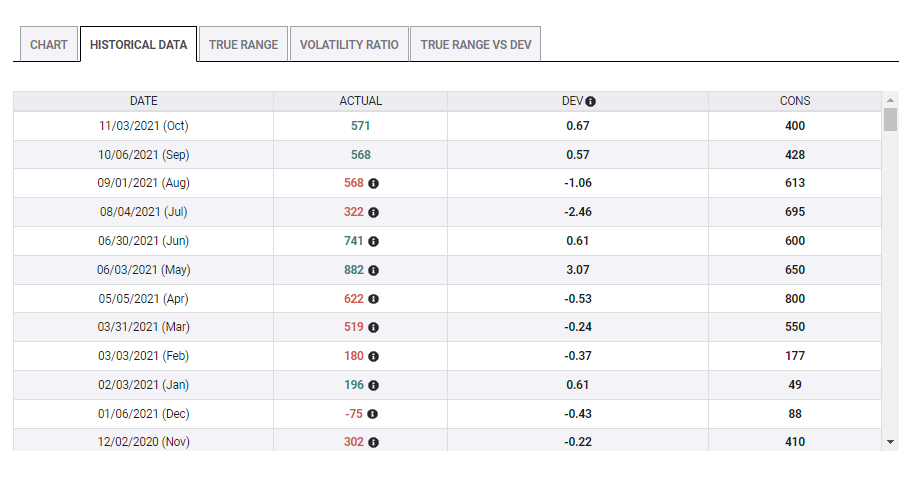 Win-win for the dollar

Hiring has picked up in America in October, and the trend could continue in November. Hiring toward the holidays is substantial, perhaps even more than usual. Americans have more money to spend than before.

If ADP's data shows hiring at around October's 571,000 or above 600,000, it could boost the dollar. Investors would see it as another confirmation that the Federal Reserve would accelerate the pace of tapering its bond-buying in December. Fed Chair Jerome Powell already opened the door to such a move – but markets are never sure.

Conversely, if private payrolls rise by less than 500,000, it could also be positive for the greenback. Why? Markets would think that if America's labor market stalled even before Omicron became known to the world, it would suffer a greater shock. The adage "When America sneezes, the world catches a cold" is relevant now when the world is coping with the new variant.

It is hard to say if ADP's private-sector jobs report could exceed or come short of estimates. However, the current market environment points to a case where the dollar could advance. Moreover, as the official Nonfarm Payrolls report is published early in the month – on Friday, December 3 – the ISM Services PMI is released only after the NFP, making ADP a more important hint.

GBP/USD clings to gains below 1.2100 amid USD retreat

GBP/USD is holding onto the recovery gains below 1.2100, supported by a weaker US dollar amid a positive shift in risk sentiment. Bumper US NFP data ramped up aggressive Fed tightening expectations. UK political woes and a dovish BOE rate hike could cap the pound's upside.

Gold needs to crack $1,763 to extend the downside

Bitcoin price shows a resurgence of buying pressure as the eastern markets open fresh to a new week. This development could turn sour if BTC fails to overcome a significant hurdle.