After experiencing its largest one day decline in months, stocks rebounded on Tuesday. While some investors may hope that the worse is over, it is important to realize that the full effects of the coronavirus has not been seen. More cases are being reported as a growing number of countries restrict travel from China. The world is scrambling to contain the coronavirus and individuals are doing their own part through limited self-isolation and minimizing exposure to big crowds. This is true throughout Asia but slowly people in other parts of the world are following suit. The fear of catching the virus is still very real which is why risk aversion could return. Today's rally should be nothing more than a temporary reprieve.

In the meantime investors are shifting their focus to the Federal Reserve's monetary policy announcement on Wednesday. This month's FOMC is not expected to be market moving. At their last meeting, the central bank made it clear that monetary policy is on hold. Federal Reserve Chairman Jerome Powell sees very little reason to change interest rates as inflation grows at a slower pace. According to the dot plot that was released at the end of the year, most US policymakers forecast no changes in interest rates in 2020

Fed Chairman Powell in particular wants to see a move in inflation that is significant and persistent before tightening policy.

However, with a press conference after every meeting, Powell's comments could still move markets as investors seek the answers to 3 critical questions:

Starting with the economic outlook, China and the US reached a trade agreement shortly after the December meeting and since then, we've seen improvements and deterioration in the US economy. According to the table below retail sales rebounded at the end of the year and service sector activity accelerated but consumer confidence, job growth, wage growth, inflation, manufacturing activity and the trade balance softened. On balance the economy weakened but we don't expect the Fed to alter its economic outlook. They'll prefer to wait to March when their economic projections are updated. By then we will know how durable the Wuhan virus really is and the extent of its damage on the global economy. For all of these reasons, Powell will most likely downplay the coronavirus impact especially given the limited number of cases reported in the US thus far. Its far more prudent to wait for the next meeting in March when more facts are at hand. 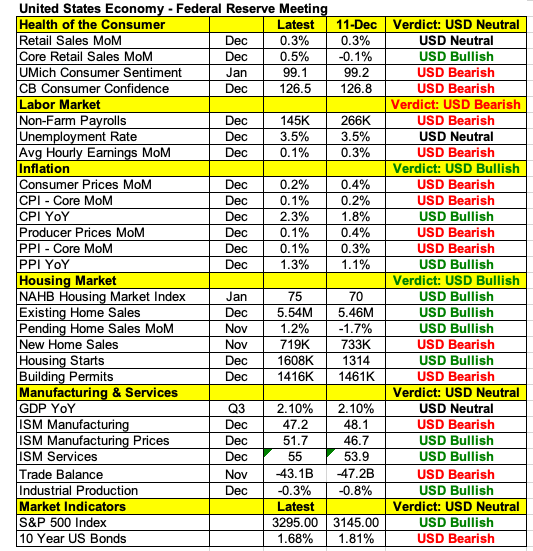 Last but certainly not least is the issue of liquidity. The central bank has been providing a tremendous amount of liquidity through their purchases of Treasury bills. In the last 4 months alone, their balance sheet expanded by almost $400 billion. Powell and the Fed described these purchases and temporary repo operations as technical adjustments meant to keep bank reserves and repo rates in control. They plan to continue these purchases until the second quarter, but what happens next? Investors will be keen to understand the central bank's plans for QE lite. The issue will be heartily debated at this week's meeting and the question is whether their discussions will be revealed in Powell's comments.

Aside from FOMC, Australian CPI and New Zealand trade balance numbers are also due for release. Both currencies stemmed their slide today but not before hitting fresh 7 week lows. Australian CPI could surprise to the upside given the rise in consumer inflation expectations but the steep drop in manufacturing activity in New Zealand signals weaker trade activity.