Here is what you need to know on Thursday, June 23:

Jerome Powell struck a surprisingly consistent tone on Wednesday when he appeared before the Senate Banking Committee. Well, unsurprising really, and consistent only in the fact that he changed his mind yet again. This man is the ultimate central bank flake. We have had "transitory" inflation to a panic-leaked 75 basis point hike, and now he says a recession is in the cards and that a soft landing is hard to engineer.

He did at least commit to his most recent pivot, that of being the inflation firefighter. 75 basis points looks nailed on for July, but further ahead money and bond markets are starting to price in the increased likelihood that we get a recession and perhaps not a mild one. All this has led to continued uncertainty among financial market investors, and as we keep banging on the market hates uncertainty more than bad news. The bond market is having a hard time coming to some form of consensus on rates. Until it does, expect more equity sell-offs.

The imminent end of H1 may give equities some form of cushion, but then we head straight for earnings season, and this one is likely to get ugly. Already we have pitched in with our $100 price target for Apple (AAPL), and this quarter should see tech companies once again roll over. Note that tech companies are advertising agencies of old. Google, Snap and Meta all rely heavily on advertising spend. Historically, advertising spend falls sharply in a recession. This is already happening, and we saw hints in last quarter's earnings. Expect this trend to accelerate.

Many of the former FAANGT names have rolled over, but Apple is the last block to fall. There is some light at the end of the tunnel, a wash-out earnings quarter could see much of the bad news finally priced and lead to a bottom in equities in late summer or early fall. Until then the focus on quality and defensive or value sectors is likely to outperform, despite June seeing growth outperform. Some profit-taking perhaps? Oil stocks have been the one bright spot this year. Now with oil prices starting to look shaky, the final peg may go.

The dollar remains at 104.42. Reminder, a strong dollar hurts US global earnings as foreign currency earnings are converted. This is another headwind for Q2 earnings then. Gold trades at $1,832, and Bitcoin is holding on for dear life at $20,600. This is worrying that it has stabilized after recent losses. Usually, stabilization is a continuation signal. Oil is at $106 and has dropped to $101 on Wednesday.

Accenture (ACN) is down as profit drops on Russia's exit.

FactSet (FDS) reiterates guidance as it beats on earnings.

LiAuto (LI) up as it shows off new SUV.

RiteAid (RAD) up on top and bottom-line earnings beat.

Hyzon (HYZN) up on a deal with Schlumberger.

Revlon (REV) is actually down premarket after spiking 600% following announcement of Chapter 11.

Weber (WEBR) up 15% premarket. Must be BBQ season. 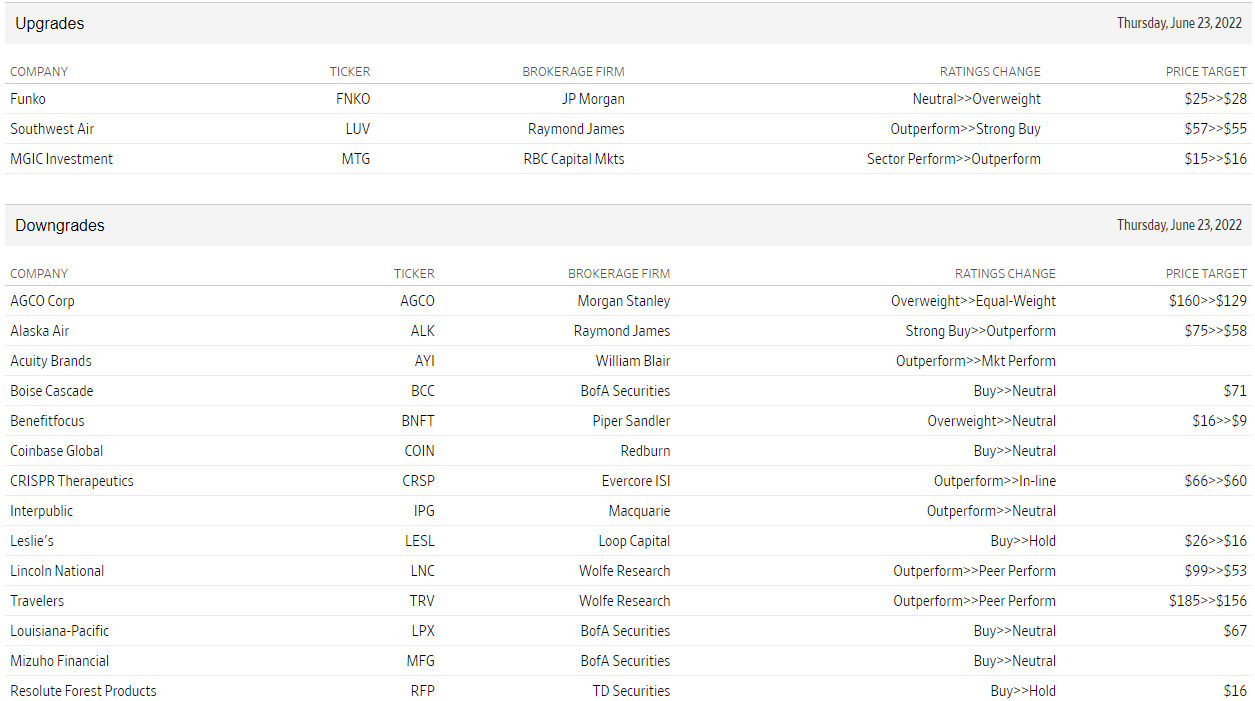