Here is what you need to know on Wednesday, February 2:

And so it begins. The ECB now finds itself just as far behind the curve as the Fed was and still is. Eurozone inflation just printed a massive upside at 5.1% versus 4.4% expected. Italian inflation is running at a 25-year high ahead of the ECB meeting tomorrow. Bond markets have already priced in 35bps of rate increases from the ECB this year despite ECB President Lagarde saying she sees no hikes in 2022.

We now have a slew of global central banks rushing to tighten policy to catch up with runaway inflation. This has historically seen riskier assets struggle, especially in the tech sector. But we should note real interest rates (inflation minus interest rates) are the better metric to watch in this respect, and those are still in negative territory and at multi-decade lows.

Google knocked earnings out of the park after the close on Tuesday, and the shares are up 10% in the premarket. Facebook steps up after the close, and that could and should underpin equities for now. Facebook though is a risk as it has now priced in a beat. The ADP employment just out is a worry ahead of Friday's employment report. The dreaded specter of stagflation comes ever closer.

Xilinx (XLNX) up 12% on AMD earnings. AMD is buying them.

General Motors (GM) up 2% on earnings beat after the close on Tuesday.

Boston Scientific (BSX) drops on weak outlook. Earnings were a beat on EPS and revenue.

Exelon (EXC) is down 26% on Constellation Energy separation. 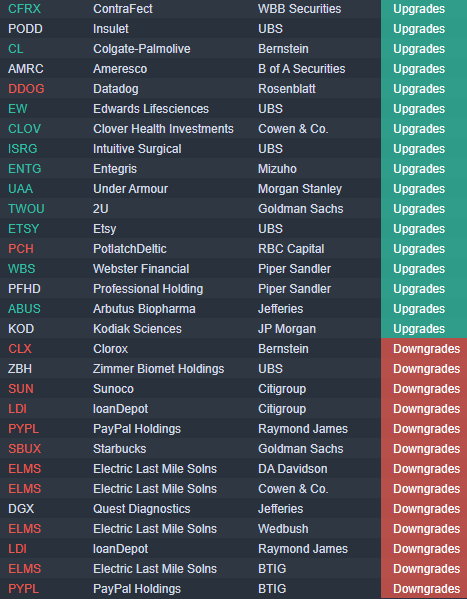 AUD/USD bounces from 0.6850 as China's PMIs return to expansion

AUD/USD is bouncing from the 0.6850 area, as bulls find support from the expansion reported in the Chinese NBS PMIs. The US dollar clings to recent gains amid a cautious market mood, awaiting the critical US PCE inflation.

USD/JPY advances towards 137.00 amid firmer DXY and mixed Japan data

The USD/JPY pair is aiming to recapture its fresh 23-year high around 137.00 as the DXY has strengthened on hawkish commentary from Fed chair Jerome Powell. Japan’s mixed Industrial production data has weakened the yen bulls further.