USD/JPY has been an early mover on Wednesday in Asia, falling from a high of 136.71 and dropping to 136.24 so far. The price is however stalling here and consolidation is taking shape after the dovish Bank of Japan Minutes.

Before the sell-off in USD/JPY, the yen weakened to the lowest point since 1998 as investors bought up risk assets following last week's rout in equities.  Bargain hunting put a global bid on equities. MSCI's broadest index of Asia-Pacific shares outside Japan rose 1.3%, moving higher from a more than five-week low and set for its best day in around two weeks.

Consequently, the yen is gaining against a softer US dollar and rising euro. The single unit rose on Tuesday, drawing support from the European Central Bank's plans to raise interest rates to contain inflation. The dollar index DXY, which tracks the greenback against six major peers including the euro and the yen, was down 0.2% at 104.23, with eyes on Federal Reserve Chair Jerome Powell's testimony to Congress, which kicks off on Wednesday. Investors will be pivoting to Fed Chair's testimony, looking for further clues on future interest rate hikes and his latest views on the economy.

As per the prior multi-timeframe analysis from the New York session, USD/JPY Price Analysis: Bears are lurking and a significant correction could be on the cards, a topping formation was highlighted on the 5-min chart:

The price has subsequently dropped as follows, leaving a menacing M-formation on the hourly chart: 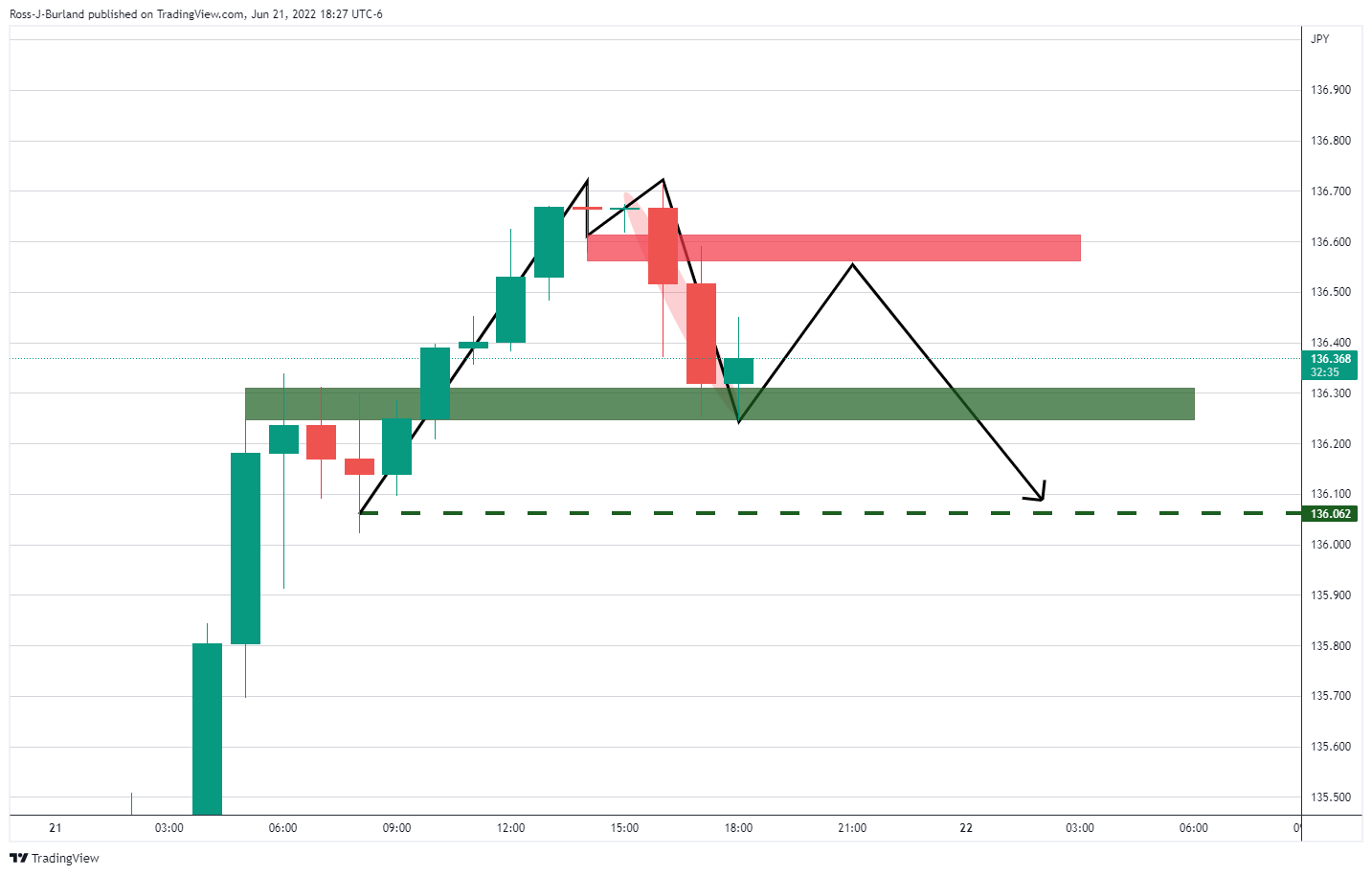 The bulls are moving in at this juncture and the price imbalance could be mitigated below any further downside towards 136 the figure.

If, on the other hand, the bears commit at this juncture, then the 36.2% Fibo may be confirmed as a strong enough correction:

The 10-min chart's M-formation's neckline aligns with the Fibo, offering additional conviction to the downside case.

EUR/USD has retreated modestly after having touched its highest level in over a month above 1.0360. With the greenback struggling to find demand following the soft July inflation data, however, the pair holds above 1.0300 and looks to post strong daily gains.

GBP/USD retraced a small portion of its impressive daily rally during the American trading hours but remains on track to register its largest one-day gain since early June. The lower-than-expected July CPI data from the US weighed heavily on the dollar mid-week.

After having failed to reclaim $1,800 with the initial reaction to the soft July inflation data from the US, gold is attempting to break above that key level. The benchmark 10-year US Treasury bond yield is down nearly 1% on the day, helping XAU/USD push higher.