The USD/CAD climbs sharply during the North American session, as Fed officials remained focused on bringing inflation down, disregarding a possible US recession, while markets’ expectations for a Fed pivot dwindled, as shown by US equities, registering losses. Therefore, the USD/CAD is trading at 1.3722, above its opening price by 0.81%.

At the time of writing, the Bank of Canada’s Governor Tiff Macklem expressed in prepared remarks that while Canada’s economy begins to slow, the labor market remains tight, while demand is still eclipsing supply. Macklem commented that the bank needs clear evidence that inflation is coming down.

Hence, BoC’s Macklem added that “there is more to be done,” paving the way for additional rate hikes. The next Bank of Canada’s interest rate decision would be October 26.

The USD/CAD reacted downwards on his remarks crossing newswires, dropping below 1.3700, but quickly reversed its move and testing the daily highs.

Earlier, Canada’s Ivey PMI index for September rose by 55.9 in September, unadjusted, while seasonally adjusted, came at 59.5, below previous figures.

Aside from this, US data, even though it flashed signs that the labor market might begin to feel the Fed’s monetary policy, traders remain at bay, waiting for Friday’s Nonfarm Payrolls figures. Initial Jobless Claims reported by the US Labor Department outpaced expectations in the week ending on October 1, rising to 219K, higher than estimates of 203K, while the 4-week average persisted unchanged at 206.5K.

Before Wall Street opened, the Minnesota Fed President Neil Kashkari said that the Fed is “quite a ways away from pausing rates,” reiterating the that there’s “more work to do” to bring inflation towards the Fed 2% target. Elsewhere, on Wednesday, Atlanta’s Fed Bostic and San Francisco Fed Daly expressed the need to hike rates higher for longer, disregarding possible rate cuts in 2023.

The USD/CAD one-hour chart grabbed the attention as an inverted head-and-shoulder chart pattern emerged. Earlier, the USD/CAD dived towards its daily low at 1.3564 but is staging a recovery, above 1.3720, testing the previously mentioned head-and-shoulders pattern neckline around current exchange rates. Once cleared, it could open the door for further gains, with the R2 daily pivot being the immediate target at 1.3800, ahead of the 1.3877 head-and-shoulders targets. 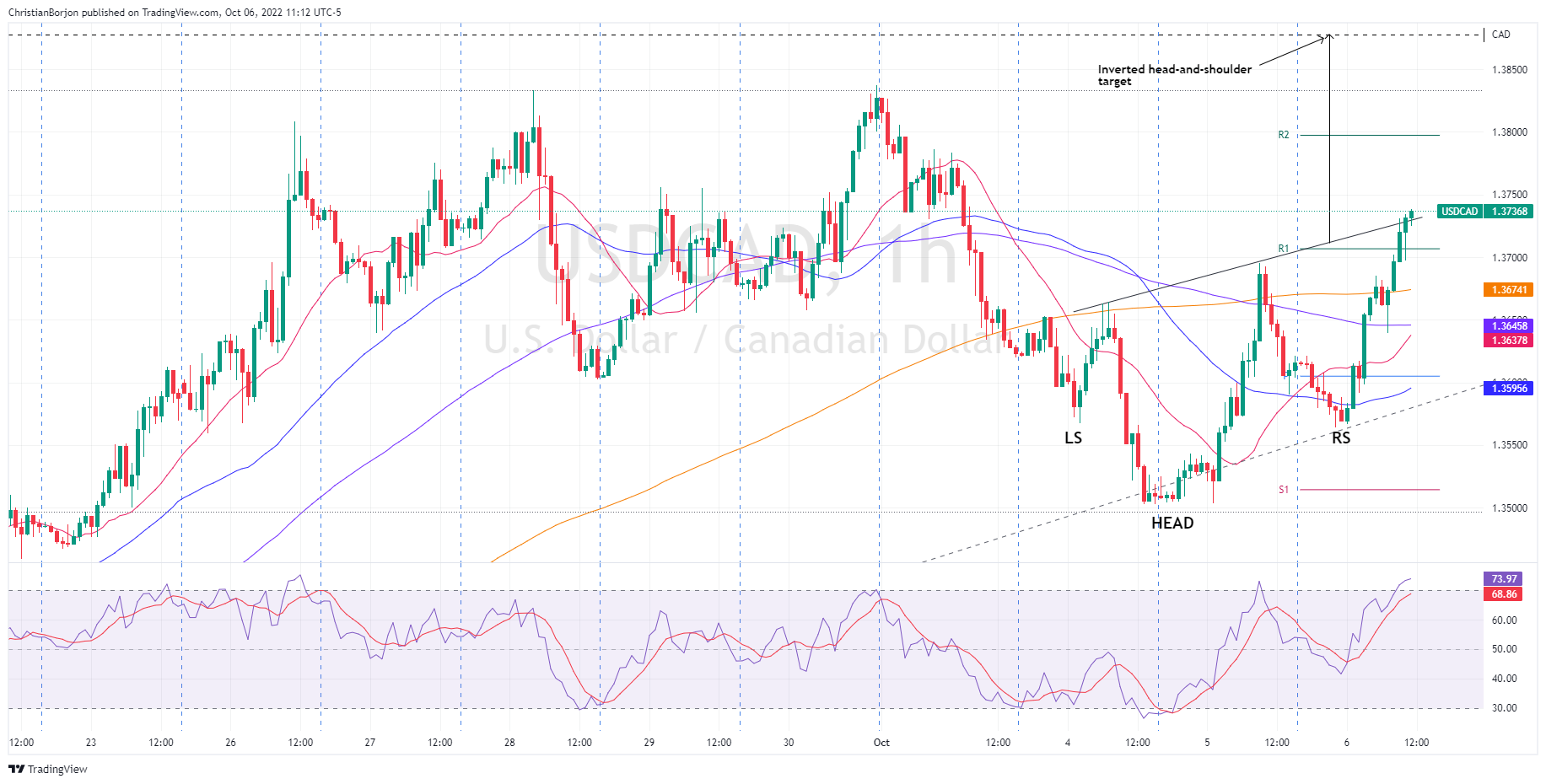