The will-he-won't-he saga appears to be nearing a conclusion, but it is not over the finish line yet. Market participants and investors look to be doubting the deal if the latest share price movements are anything to go by. Twitter is trading at under $50 now at $49.30 this morning in Friday's premarket. That is a near 10% discount to the offer price of $54.20. Given the deal is due to close shortly, that is a larger-than-usual deal approaching the finish line. Usually, merger arbitrage players would be all over such a discount so near to closure, but this deal has been clouded in uncertainty from the start. Extra caution is obviously being taken in valuing the probability of the deal going through.

Always the risk in writing about this one is that the news changes dramatically and quickly, but the latest appears to be that the Twitter trial date to try and force Elon Musk to go through with his purchase has been delayed to allow the deal to go through by October 28, according to the judge. That appears to be good news.

"This action is stayed until 5 PM on October 28, 2022, to permit the parties to close on the transaction," wrote Chancellor Kathaleen McCormick of Delaware's Court of Chancery.

The judge also said if the deal does not close by then, a trial date in November will be set. Various media sources carried news earlier on Thursday that Elon Musk's team had attempted to delay the trial on Thursday, but Twitter responded: "Twitter opposes Defendants' motion...The obstacle to terminating this litigation is not, as Defendants say, that Twitter is unwilling to take yes for an answer. The obstacle is that Defendants still refuse to accept their contractual obligations."

The TWTR stock price is obviously volatile as a result of all this contrasting news and is likely to remain so. Will the deal get finished, and if so when? The risk-reward diminishes near the strike or take-out price of $54.20. Technical analysis does not really apply to a merger arbitrage situation. 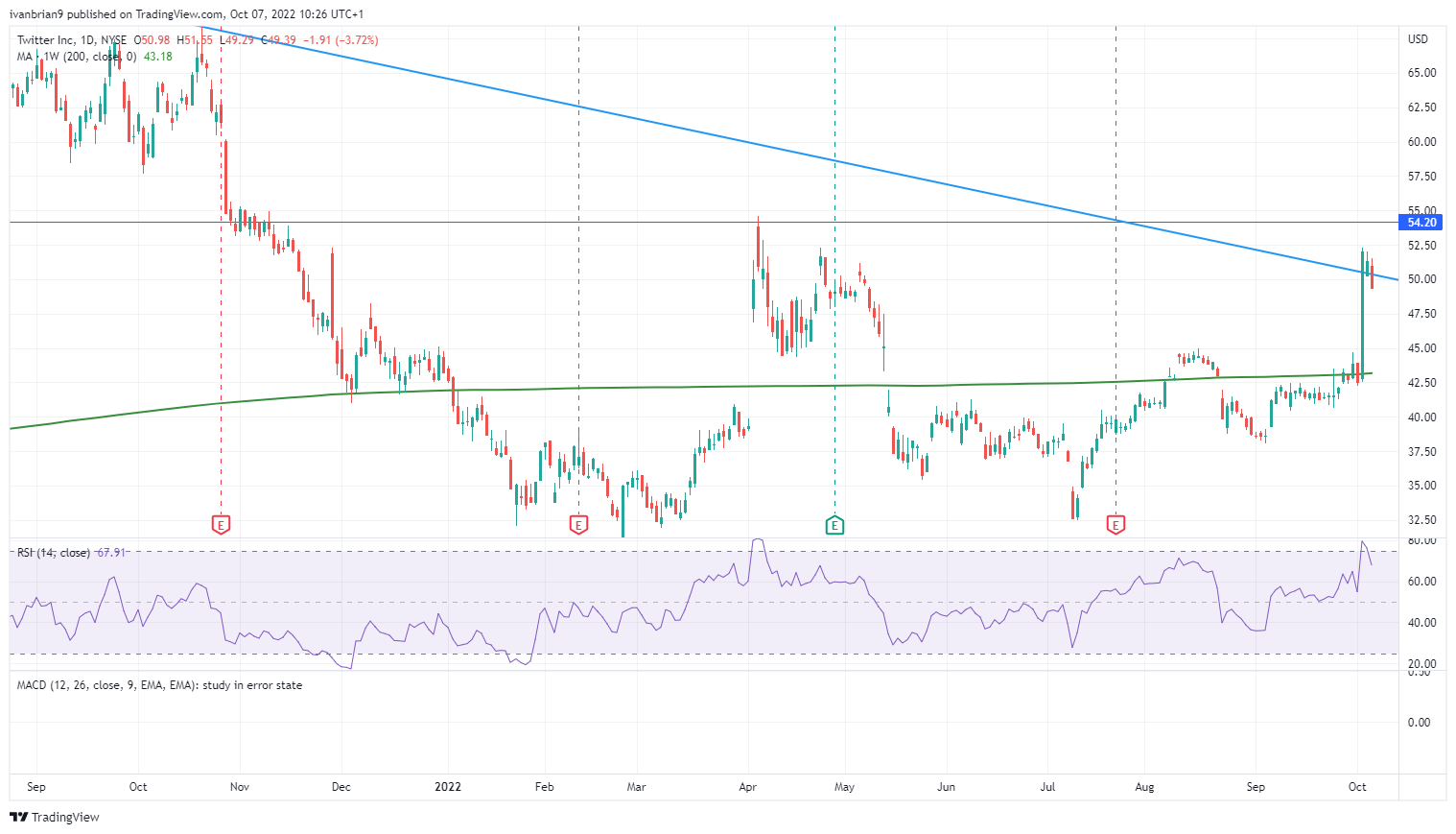 AUD/USD struggles to defend the latest bullish impulse around 0.6725-30, after bouncing off a one-week low the previous day, as traders await updates/data from Australia during early Thursday.

EUR/USD grinds higher past 1.0500 with eyes on ECB President Lagarde

EUR/USD struggles to defend the previous day’s corrective bounce around 1.0510-15 during Thursday’s Asian session. In doing so, the major currency pair portrays the market’s inaction amid a light calendar and mixed sentiment.

Gold price seesaws around $1,785, after posting the biggest daily gains in a week, as buyers seek more clues to approach the five-month top marked earlier in the week. The yellow metal’s latest run-up could be linked to the downbeat performance of the United States Treasury bond yields.