NYSEAMERICAN:TRXC had another rollercoaster trading session as shares surged by nearly 30% to start the day but eventually hit the red by the closing bell. This is not uncommon to see, especially with small-cap healthcare stocks which are known to be extremely volatile when good or bad news hits. Taking a look at Transenterix’s daily trading volume shows that nearly 97 million shares changed hands today, which is about six times the average daily trading volume of 16 million shares. The stock did briefly hit a new 52-week high of $4.44, before setting back down to $3.47 at the end of trading hours.

The catalyst was European approval for Transenterix’s Intelligent Surgical Unit or ISU, which provides improved machine-vision functionality for its Senhance system which specializes in laparoscopic surgeries. Any improvement to robotic vision can only be seen as a positive when it comes to performing surgeries, so it stands to reason as to why investors have shown such excitement as of late. There are an estimated 6 million laparoscopic procedures that take place every year in both the United States and Europe, so the market for the Senhance system seems ripe for the picking. 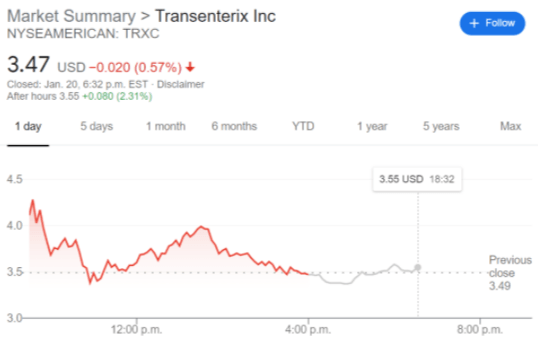 The sudden swing in TRXC looks to be investors skimming some profits from the recent bull run as the stock begins to consolidate some of its momentum. What does this mean for the future? It is difficult to say as a fuller buy-in for robotic surgeries is still needed even if the equipment has received approvals but if industry-leader Intuitive Surgical (NASDAQ:ISRG) is any indication of how well robotics companies can do, TRXC may be in for an extended period of gains.