Update: Early trading is pretty directionless for Tesla and with many stocks releasing results next week this is not too surprising. Big tech names kicked off yesterday with Netflix while Apple releases next week. Tesla is stuck in a high volume zone with a recent double top and then a double bottom, direction is tough to identify.

Tesla continued to recover ground on Tuesday as did most stocks in a rebound from the sharp losses on Monday. Tesla popped back to $660 and in the process has formed a small double bottom, which may be useful for some short-term trading possibilities. Overall though the stock remains relatively choppy, and the lack of a strong trend or indicator makes for some careful trading with stops and risk management taking on even more importance.

Monday had actually been a strong outperformance for the stock with general equity markets down about 2%. Tesla closed Monday in the green by just under half a percent – a relatively strong outperformance. The stock found support from the 200-day moving average and also the large amount of volume around that level added to the support.

We can see the double bottom from the chart below and also clearly the 200-day moving average support and the large volume profile bars. This has all combined to give us some potential bullishness and skew the risk-reward toward taking long positions. Now steady there before you go charging into auto pilot for longs. We have results from Tesla next week, so that will cap any strong trend forming and likely lead to a continuation of the choppiness we have seen recently.

The 9-day moving average has now been taken, and the next confirmation we would like to see is the Moving Average Convergence Divergence (MACD) indicator cross back into bullish territory. This would give further momentum to the recovery. Taking out the double top highs around $695 should help spur the move further as volume begins to thin out above here.

Choppy trading is more likely as we can see Tesla sits in an area with a lot of volume. Breaking $715 or $591 brings us into zones of light volume, so a break will likely see a price acceleration. 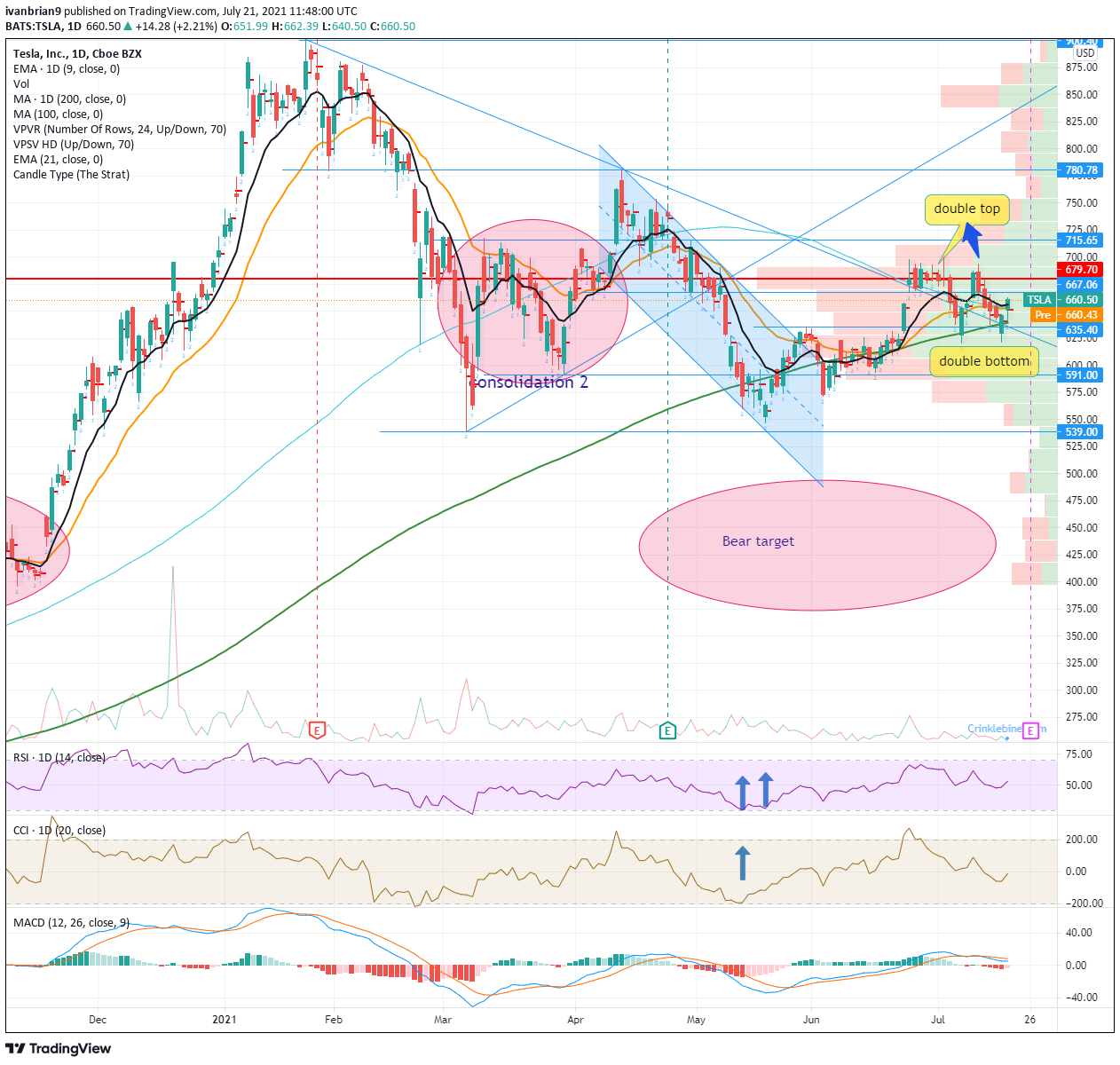 EUR/USD approaches 1.1900, hitting the highest in three weeks. The dollar is falling across the board after the Fed refrained from pre-announcing tapering and sees inflation as transitory. German CPI beat estimates with 3.8% YoY in July. US GDP misses expectations.

GBP/USD is trading above 1.40, extending its gains after the Fed seemed reluctant to taper bond buys. The EU's suspension of legal action over the NI protocol supports sterling. UK scraps quarantine rules for fully vaccinated EU, US travelers.

Gold built on the previous day's post-FOMC rebound from the vicinity of the $1,790 horizontal support and gained strong follow-through traction on Thursday.

China stocks went green for the day on Wednesday and no it wasn't St. Patrick's day but perhaps a dead cat bounce? The Fed certainly helped the green shoots as it continued its doveish stance saying there was no sign yet of dialing back ultra-loose policy.

Bitcoin price is setting the stage for a pullback after a 40% upswing. Ethereum price is following BTC but might undergo consolidation. Ripple price defies its run-up, suggesting a minor correction might be enough before another rally begins.