The will, he won't he debate surrounding Tesla (TSLA) CEO Elon Musk and his bid for Twitter continues to rumble. Twitter (TWTR) stock initially soared on Tuesday as reports broke that the deal looked like it was on. Tuesday saw news break that Musk's lawyers had written to Twitter to say the deal could go ahead subject to some conditions. Twitter shares spiked, while Tesla stock fell. The trend continued on Wednesday as speculation over the financing of the deal continues.

The recent delivery data from Tesla had seen a sharp decline in the stock price. Tesla announced last Sunday it had delivered 343,830 vehicles, less than analysts' expectations of near 358K. The number was still a delivery record for Tesla, but the stock fell sharply on Monday. It closed nearly 9% lower at $242.40. Tuesday saw a brief rally before more selling followed on Wednesday as the Twiter news broke.

Tesla is seeing selling pressure as investors assume Musk will have to sell a chunk of Tesla or pledge a lot of shares to lenders to complete the Twitter deal. Also of note is a Reuters exclusive saying Apollo Global (APO) and Sixth Street Partners are no longer in talks with Musk.This presumably puts more emphasis on the Tesla side of the equation. However, some long-term supporters are still backing Tesla. The latest reports show that ARK Invest's Cathie Wood stepped up to buy the dip with the noted fund manager buying Tesla stock after the sharp fall on Monday. While the deal for Twitter looks closer than ever to being completed, the market still is reacting with a certain skepticism. Twitter shares are trading some $4 below the offer price, indicating risk in the deal completing or even completing quickly.

Tesla stock then is likely to remain under pressure until some clarification comes to light, both in terms of the deal's financing and when or if the deal is set to proceed. Reports indicate that one of the conditions in the letter from Elon Musk's lawyers to Twitter states that it is conditional on financing.  This seems likely to go through given Musk's large Tesla holding, but the banks involved are set to take major losses on the transaction. "Leveraged financing sources have also previously told Reuters that potential losses for Wall Street banks involved in the Twitter debt in such a market could run to hundreds of millions of dollars," according to a report carried by CNBC.

There is still some doubt then concerning when and how the deal is structured in my view and the uncertainty is likely to weigh on Tesla stock in the short term. Technically, the stock has broken a key support at $254.61, and the next obvious target is the June low of $207. Resistance now comes at $266 from the gap opened on Monday. 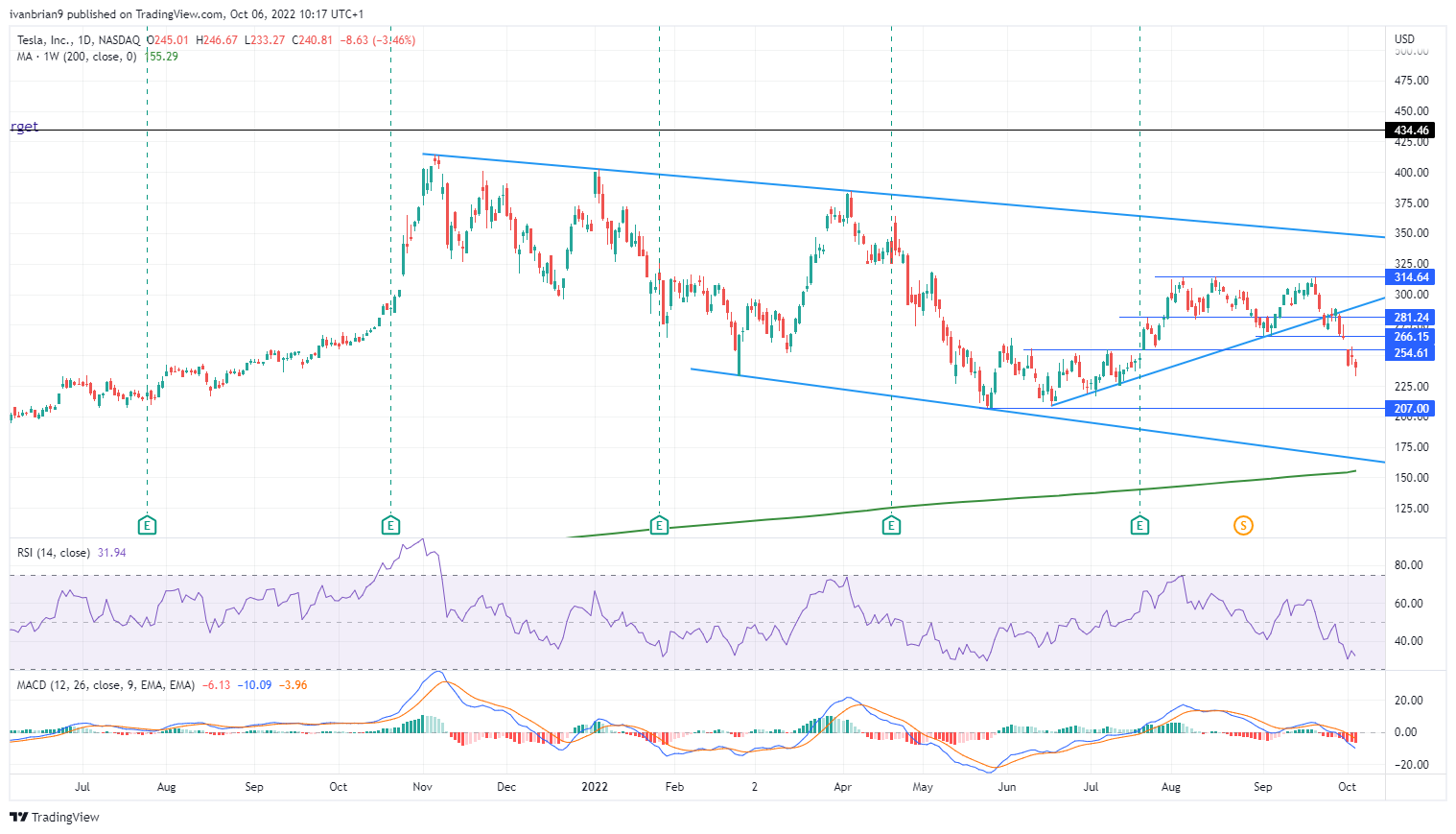