Tesla shares closed more or less flat on Thursday despite some risker stocks closing higher. Overall though, it was in line with market performance with all major indices closing lower but in a calmer fashion after Wednesday's meltdown. Tesla has been managing to hold above the $700 level with some occasional intraday spikes below. Elon Musk has repeatedly been making headlines for his reticence over the Twitter deal and now for more unsavory claims.

This is not really directly Tesla news, but Elon Musk is Tesla, and so it does affect the stock price. Business Insider published an article on Thursday claiming that SpaceX had paid a $250,000 severance to a flight attendant, who accused Musk of sexual misconduct. The report is quite detailed and has now been picked up by most media outlets. Elon Musk tweeted thusly:

And, for the record, those wild accusations are utterly untrue

Elon Musk tweeted what is presumably a response to the report above. CNBC picked up the story and looked for comment from SpaceX but so far has not received a response as far as we are aware. Business Insider said it moved the deadline for the article after Elon Musk said there was "a lot more to this story" and asked for more time to respond, but the article states that he never made any further response beyond: “If I were inclined to engage in sexual harassment, this is unlikely to be the first time in my entire 30-year career that it comes to light,” Musk reportedly told Insider. He said the article was a “politically motivated hit piece".

The alleged incident is reported to have occurred onboard a SpaceX flight in 2016.

Tesla should at least get a boost from news that China is stepping up its fiscal stimulus measures just when every other major central bank is tightening. Overnight, the Peoples Bank of China cut interest rates by 15 basis points in a surprise move. China is trying desperately to revive its flagging economy due to covid lockdown measures. Chinese demand is crucial for Tesla, and China is the world's largest electric vehicle market.

There is certainly plenty going on in Elon's world to keep writing several articles. This is more tabloid fodder than actual stock market analysis, but Elon Musk is such a totemic figure that his life intersects with Tesla almost 100%. There is no separating the two. While this story has little to do with Tesla or the performance of the company, it will be used as another stick by bears.

However, for now, those sticks may be getting shorter as TSLA stock has once again closed above our key $700 support. This is the key level. Friday sees a large options expiry, which coupled with position squaring ahead of the weekend should give stock markets a boost. $700 has been tested now on three occasions – the more a level is tested, the weaker it becomes. A break of $700 should see a sharp move to $620. 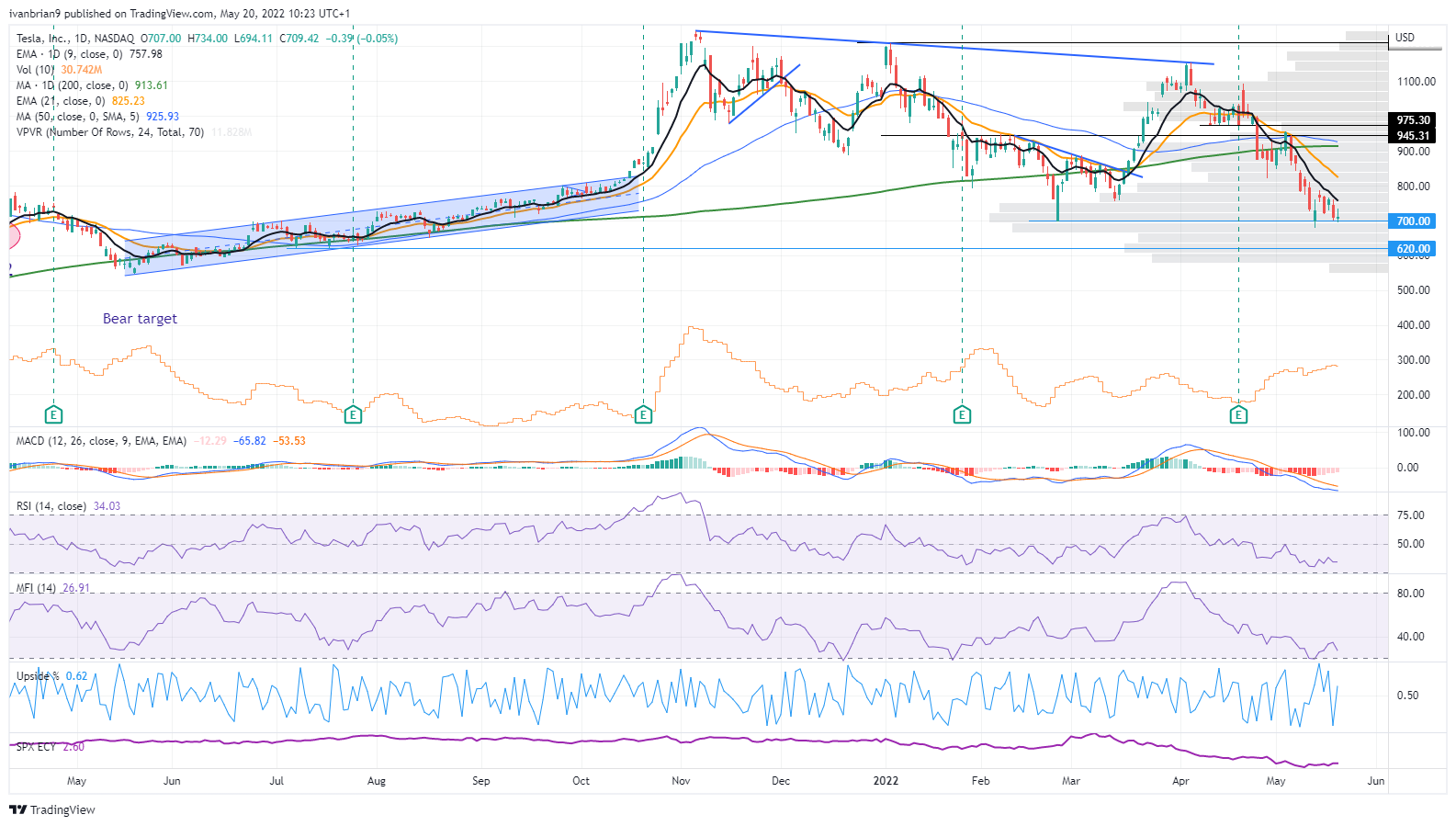