UPDATE: Was firmly bid on the day in a technical correction of the bearish impulse on the daily chart. The bulls have completed a 78.6% Fibonacci retracement and the price has settled just below there near 0.4658. However, the bulls are not out of the woods yet. This is a weekly level of resistance structure as per prior lows for the year. A close above 0.5000 will be needed to see off the supply for the time being.

UPDATE: Sundial Gowers finished Monday up 21.09% at $0.46 per share, overcoming the sour tone of the Nasdaq Composite. The index finished the day down 142 points or 1.20%. The Dow Jones Industrial Average managed to add 26 points, while the S&P 500 shed 0.23%. The cannabis producer company soared ahead of the Q1 earnings report. SNDL is back after losing ground for the last three weeks, and currently advancing on the back of speculation the cannabis industry will benefit from fresh US legislation. 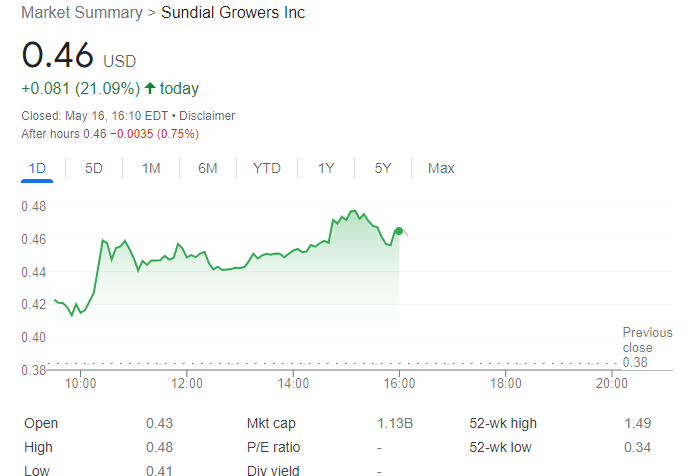 Previous update: Sundial Growers stock is up more than 11.3% to $0.4275 about 45 minutes into Monday's session. This is well lower than the 21% spike shares experienced in the morning's premarket, but so far SNDL appears to show steady accumulation with a rising share price throughout the session. Twitter and Reddit are aglow with retail traders trying to boost the stock ahead of the Q1 earnings release expected after the close. This much-loved penny stock is travelling against the current to start the week as poor data out of China and a gloomy US economic forecast from Goldman Sachs have led the Nasdaq to lose 0.4% at the time of writing.

Sundial Growers (SNDL) stock popped 21% to $0.4673 in premarket trading on Monday as its legion of fans prepares for an earnings beat. The Canadian cannabis grower and now alcohol distributer will report its first quarter results after the market closes, and shareholders are hoping for another positive quarter in line with the fourth quarter. Q4, which was only reported in late April about three weeks ago, showed positive adjusted EBITDA growth and improved sales figures. It was enough to garner an analyst upgrade.

Sundial Growers Stock News: Back to back positive quarters may lead to rally

The euphoria is real with this one. Social media is rife with shareholders expecting a short squeeze to lead to an all-out rally. Sundial is typically called a meme stock, since seemingly the same cohort of retail traders who back AMC Entertainment (AMC) and GameStop (GME) are also on the Sundial bandwagon. SNDL is a very different stock than either of those however. While the former are more mature companies that suffered disfavor in the markets and heavy shorting by hedge funds for a decade, Sundial is closer to the beginning of its journey. It has quickly risen to become a leading grower and retailer in Canada, where recreational use is legal from coast to coast.

The fourth quarter's results were good enough to gain an upgrade from BMO Capital to market perform. BMO raised its price target to $0.70 based on the steady reduction in income losses.

Sundial operates more than 180 cannabis outlets and has acquired the largest private Canadian liquor distributor, Alcanna. Additionally, it has many other equity stakes and investments such as Nova Cannabis and Sunstream. The latter is a joint venture that lends money to US cannabis producers, giving Sundial an early inroad to its much larger southern neighbour.

For the first quarter, investors will focus on Sundial's cash position. At last check this was at C$378 million. As a company that remains focused on growth rather than profits, a heavily reduced cash figure may lead shareholders to think they are in for another dilution. The primary reason that SNDL is down 49% in the past year is that management sold new shares to raise C$1.2 billion in 2021 for its investment activities. Now markets will focus on how fast management plans on buying back shares – its long-term stated goal.

Additionally, markets will hope for a revenue figure that tops C$22.7 million, the sales figure from Q4, and an EBITDA figure that tops the last quarter's C$18 million. Sequential gains here would mean that management's investments are playing out. With the Canadian cannabis industry as a whole drooping in the first half of 2022 along with the rest of the market, expect Sundial's large and varied investment portfolio to take a hit. This should forestall an GAAP profits until markets turn around for the better.

Prior support levels at $0.43 and $0.46 may act as resistance in Monday's regular session. Both of these will need to be conquered in order to allow for a further rally. The good news is that SNDL stock may have bottomed on the Relative Strength Index (RSI) last week. This should give traders a better shot at keeping the current rally in play.

If SNDL closes above $0.46 on Monday, then it may make a play for the 20-day moving average, now at $0.475, or even the 50-day, currently at $0.523. Both of these moving averages would likely act as stiff resistance though. Of course, a surprise buyback announcement, if big enough, could destroy any technical analysis.

EUR/USD is trading below 1.0600, meeting fresh supply on ECB President Christine Lagarde's introductory speech on Day 2 of the ECB Forum in Sintra. The US dollar struggles amid a positive shift in risk sentiment and firmer yields. US data awaited.