The S&P 500 has been choppy since the open of cash equity trade, swinging between the low 3560s and upper 3570s over the last two hours. At present, the index trades with losses of around 0.4% or 12 points on the day.

US equities (and broader risk appetite) got a boost towards the end of Thursday’s US session on the news that the Senate Majority Leader, Republican Mitch McConnell, had signalled to the Democrats that the two sides could restart fiscal stimulus negotiations. Subsequently, Democratic Congress Leaders Nancy Pelosi (who is Speaker of the House and in charge of the Democrat’s majority there) and Senate Minority Leader Chuck Schumer met with leading Republicans yesterday to discuss stimulus.

However, reports this morning from a senior person close to the administration suggested that the idea of any stimulus during the lame-duck session was “laughable” and that no serious talks are going on. Thus, markets are unlikely to get their hopes up too quickly, given the all too recent memory of stimulus “negotiations” ahead of the election. For context, it became clear heading into the election that fiscal stimulus talks between the Democrats and Republicans were not being conducted in good faith.

Meanwhile, equity traders must also grapple with the prospect of the Federal Reserve’s 13(3) emergency lending facilities not being renewed on the 31st of December; Treasury Secretary Mnuchin announced the decision on Thursday night after the market close (and there was subsequently a mini-sell off in S&P 500 futures from 3580 to 3560), and he has since gone back and forth with Fed officials in the media today (Fed’s Evans criticised the decision in an interview on CNBC, only for Treasury Secretary Mnuchin to interview on the TV network minutes later and criticise Evans).

Mnuchin maintains that the decision to end the programmes, and the request for the Fed to then return the capital needed to run the programmes to the Treasury, will bring $455B back into government coffers. Critics and the Democrats are suggesting that the motivation behind the decision is to cause problems for the incoming Biden administration.

Traders must now assess the long-term implications of the programme; the incoming Biden administration can probably be expected to reverse Mnuchin’s decision meaning any long-term effects ought to be minimal.

Another factor on the minds of traders today is the fact that Pfizer/BioNtech are to submit their requests emergency use authorisation for their vaccines, with the pharmaceutical duo saying that their vaccines could be ready for distribution within hours of receiving approval. Further equity upside on an extension of vaccine optimism is thus still a risk.

S&P 500 futures put in a double top during the late European session morning on Friday, with the index future contract rising back to Thursday highs at just above 3580, before reversing back to current levels around 3570.

Whether this double top will hold and signal further downside in the days ahead remains unclear, but would be made less likely in S&P 500 future can rally back and surpass highs made earlier on in the day.

Since Thursday, S&P 500 futures have conformed to an uptrend that ought to come into play in the mid-3560s. A break of this could open up the door for a push back towards lows of the week just under 3550. 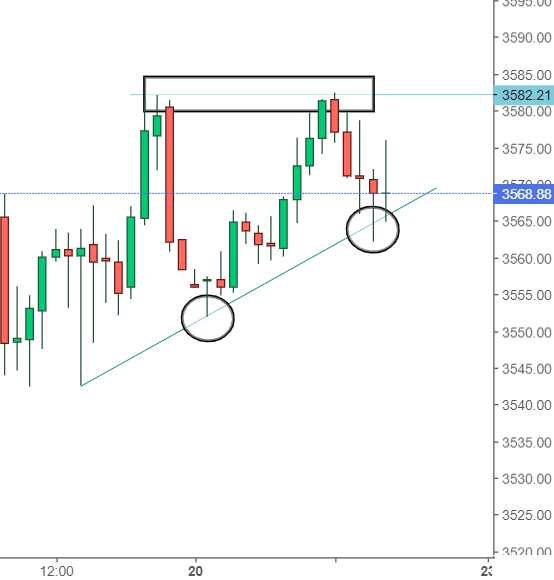 AUD/USD fades an uptick above 0.7400 despite upbeat China's PMIs

AUD/USD pares gains and drops back below 0.7400 amid a cautious market mood, reflected by the losses in the S&P 500 futures. Australian-Sino trade tussle outweighs the vaccine optimism and upbeat Chinese NBS PMIs.