Silver (XAG/USD) has managed to recover a major part of the intraday losses to over one-month lows and was last seen hovering near the top end of its daily trading range, around mid-$26.00s.

From a technical perspective, a sustained break below the $26.70 confluence support was seen as a key trigger for bearish traders. The mentioned region comprised of 200-period SMA on the 4-hourly chart and a short-term ascending trend-line extending from mid-January. This should now act as a key pivotal point for the white metal's near-term trajectory.

Meanwhile, technical indicators on the said chart maintained their bearish bias and have just started drifting into the negative territory on the daily chart. Hence, any subsequent move up might still be seen as a selling opportunity and runs the risk of fizzling out rather quickly near the $26.70 confluence support breakpoint, now turned resistance.

The XAG/USD seems vulnerable to extend its recent sharp pullback from the $30.00 psychological mark and slide further towards intermediate support near the $25.45-35 congestion zone. The downfall could further get extended towards the $25.00 key level en-route the $24.75-70 region and YTD lows, around the $24.00 mark touched on January 18.

On the flip side, momentum beyond the $26.70 support-turned-resistance might trigger a short-covering move, though is likely to remain capped near the $27.00 area. A sustained move beyond will negate the near-term bearish bias and push the commodity back towards a strong horizontal resistance near the $28.00 round-figure mark. 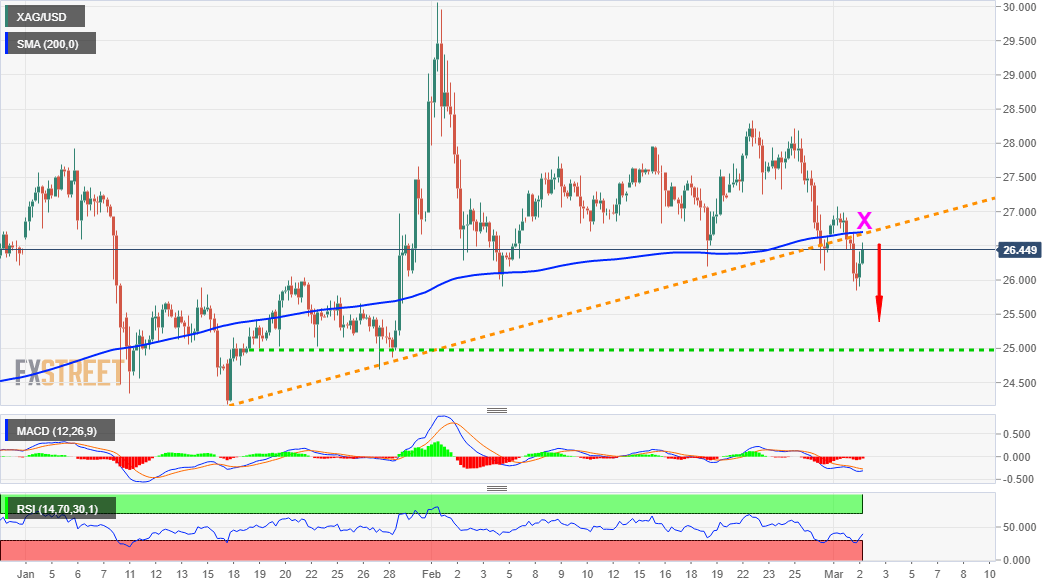