NASDAQ:SENS has been a stock on fire lately as shares have already gained more than 235% since the beginning of January. On Monday, Senseonics Holdings added a further 27.71% to close the first trading session of the week at the price of $2.95. The recent surge has pushed the penny stock to levels over double its 50-day moving average and nearly six-fold over its 200-day moving average, which shows its rapidly ascending trajectory. The stock is trending back towards its 52-week high of $3.90 that it reached earlier this month.

There were a couple of catalysts that sent the little known diabetes treatment company skyrocketing on Monday. The first is an underwriter valuing shares of the company at $1.925 each as Senseonics works through the process of a public stock offering of over 51 million new shares. It is a common vehicle used by firms who have seen their stock price grow rapidly in a short amount of time. The second reason is that investors have growing optimism that Senseonics will find out if they are to receive FDA approval for its Eversense CGM System. There is anticipation that this decision will come in the first half of 2021. 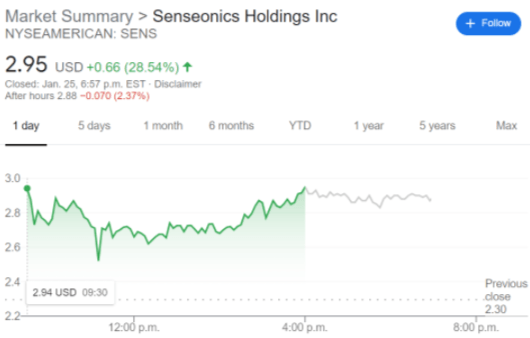 The Maryland-based company could see a further surge in its stock price if the FDA does give them its approval. The Eversense CGM System allows patients to constantly measure their glucose levels for periods of up to 90 days. Senseonics is also still riding the high of entering an agreement to have the cost of its equipment covered by EmblemHealth, one of the largest not for profit health plan providers in the United States.