Plug Power Inc (NASDAQ: PLUG) has plenty of fuel in its tank to extend its rally. The Latham, New York-based company makes hydrogen fuel cell systems that serve as a substitute for legacy batteries and is geared toward the automotive sector – where its most recent boost came from.

Groupe Renault, the conglomerate behind the Renault cars which are common in Europe, signed a joint venture with Plug Power. The companies will set up a facility in France that would integrate the American firm's technology into the French carmaker's commercial vans.

The critical partnership places PLUG in the big league of global automakers and is behind the recent rally, which already values the firm at over $30 billion. It previously announced a deal with South Korea's SK and investors may already be eyeing new partnerships.

Jeffrey Osborne, an analyst at Jefferies, said that the Renault deal serves as "validation" for the firm's technical ability in both electrolyzers and fuel cells, setting a price target of $73.50. 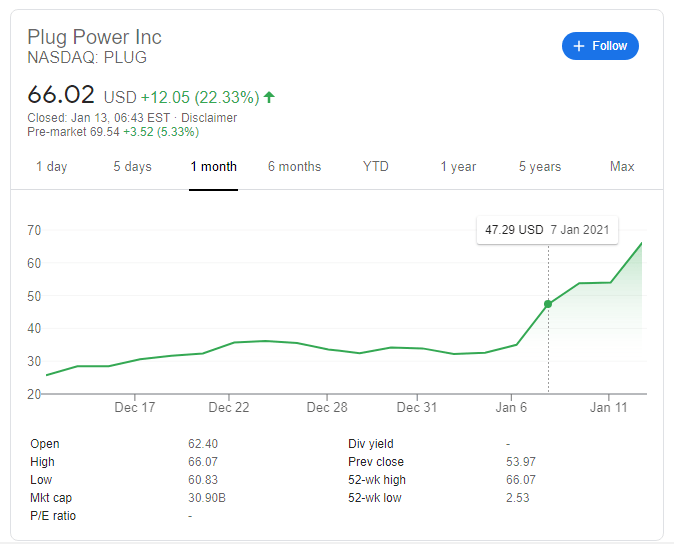 NASDAQ: PLUG's surge of 22.33% on Tuesday comes after previous moves earlier in 2021, with shares more than doubling in value. Looking back to early December, Plug Power traded below $30. C

Can this impressive run continue? Wednesday's premarket trading data is pointing to another gain of over 5% to nearly $70. Will some take profits after the rally? There is a good chance that a downside correction is coming.