It has not been a memorable year for NYSEAMERICAN:NTN investors as shares of the Carlsbad, California based company have returned -18.78% over the past 52-weeks which trails the S&P 500 by nearly 30%. The stock fell by 2% to open the week during Monday’s trading session despite climbing as high as $2.48 in the morning, as the broader markets experienced an overall selloff. With shares reaching a trading volume of nearly ten times the average moving volume on Monday, it is no surprise that the stock exhibited such high volatility over the course of a single trading day.

Much of the action was a result of the Friday announcement that NTN Buzztime would be selling off its social entertainment, customer engagement, and advertising technology assets to a private company known as eGames.com Holdings in a deal worth $2 million. This is a part of the bigger plan that involves NTN Buzztime initiating a reverse merger with another private company called Brooklyn Immunotherapeutics LLC. The merger would see NTN Buzztime, a game publishing company, join Brooklyn Immunotherapeutics to create a new biotech firm that would focus on developing cancer treatments. 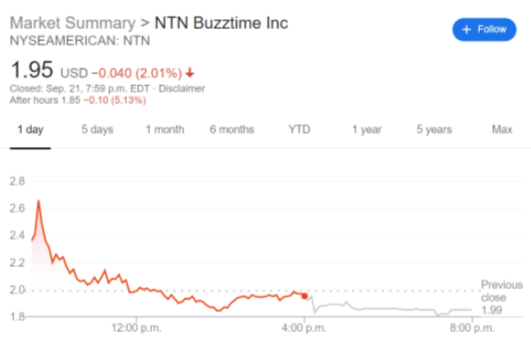 The forecast for NTN Buzztime’s stock is interesting since after the merger with Brooklyn Immunotherapeutics is completed, the newly created company plans to trade under a different ticker symbol. It is an interesting industry change for NTN Buzztime who shifts its focus from game publishing over to cancer treatments. Interestingly enough the stock has a price target from Wall Street analysts of $5.50 which means investors could see some relevant upside from current trading levels, especially if the results of the merger are considered successful.