Update: Nano Dimension (NNDM) shares paused for breath on Wednesday. Understandably given the run NNDM has been on and given the broader weakness, with most stock market indices down. Technical support at $13.96 is the 23.2% Fibonacci retracement of the move in the NNDM. The RSI has yet to match the new highs in the NNDM. This is usually a bearish sign, but given the size and speed of the move, it is not unusual as RSI is a lagging indicator. 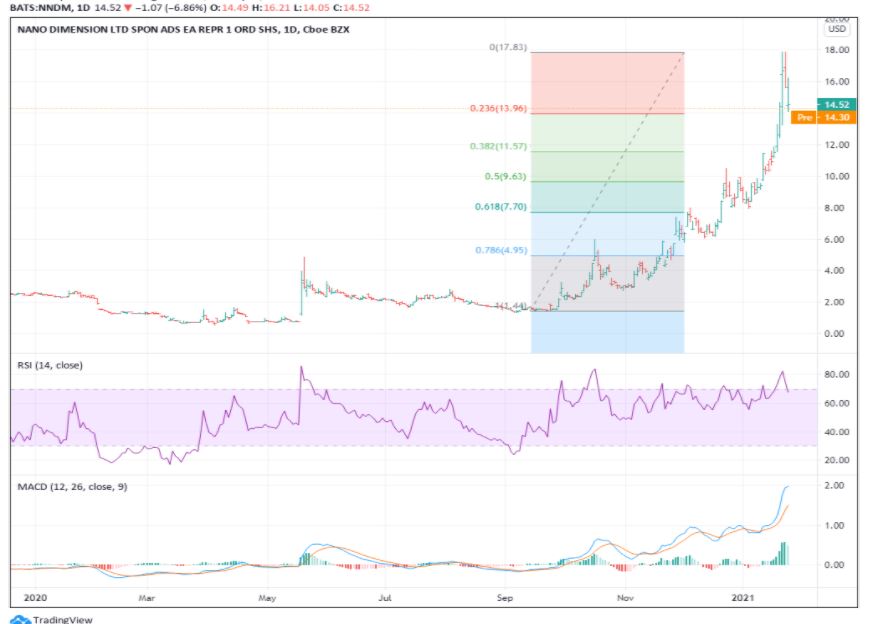 NASDAQ:NNDM has been a stock on a mission this year as investors have piled into the 3D printing technology firm. So far in 2021, shares have climbed by 84% despite the fact that the company has done multiple new share offerings over the past few quarters. On Monday, Nano Dimension gained a further 15.77% hitting a new all-time high of $17.85 before settling back down to $16.66 before the closing bell. Nano Dimension has now returned over 500% to investors over the past 52-weeks, and all of a sudden, the company has a market cap of nearly $3 billion.

One of the most revered investment firms on Wall Street, Ark Invest, doubled down on their faith in Nano Dimension by adding another 300,000 shares to its ARKQ fund which is for companies who are in the autonomous technology and robotics space. A further 30,000 shares were added to ARKW, which is the ETF that covers the next-generation internet companies. Both are highly thought of by both institutional and retail investors alike, and receiving the thumbs-up from Ark Invest is a sure way to get on the radar of investors everywhere. 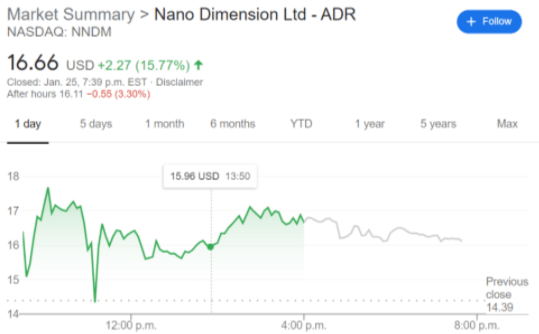 Nano Dimension also announced that Dr. Eli David, a world-renowned artificial intelligence and deep learning expert is joining the company’s Board of Directors, as it looks to strengthen its leadership team. Dr. David’s impressive artificial intelligence portfolio includes being a co-founder of Deep Instinct, which is used for cybersecurity. Nano Dimension also proposed a further share offering slated for the middle of February, which could potentially offer another 18 million shares for investors. While share dilution is never popular amongst investors, capital raising generally benefits the company in the long-run.

GBP/USD recovers back to mid-1.4100s after choppy day

Having found support above 1.4100, GBP/USD has moved back into the mid-1.4100s. Though having now been overtaken by AUD, NZD and NOK, GBP is still a strong performer this week.