Update: The slump continues for NIO as the shares drop another 2% from the off on Friday. The stock has not reacted well to strong earnings numbers as the pace of deliveries slowed. Failure to break $47.39 a number of times has also led to the technical move lower. $41.34 is the 100-day moving average and the next level likely to be tested.

NIO stock has not reacted well to a reasonable set of numbers released on Wednesday after the market closed. NIO announced earnings per share (EPS) for Q2 of $-0.03 versus the expectations for a $-0.11 result. Revenue was also slightly ahead of forecasts at $1.304 billion versus the $1.298 billion estimate. NIO also guided Q3 sales estimates higher than previous estimates. The results were strong, but sales growth slowed MoM,  which is why the shares have not pushed ahead. NIO delivered 7,931 cars in July, down about 2% from June. The CEO did comment on supply chain issues, saying the company was working with its partners to solve them.

News this morning hit us that one of NIO's suppliers and also Tesla's is seeking to raise $9 billion to expand its production of lithium-ion batteries. Chinese company Contemporary Amperex Technology (CATL) is trying to raise $9 billion to fund up to six projects to increase production.Also of note and perhaps being overlooked is that NIO has plans to enter the mass market of electric vehicle production with plans for a more affordable model. CEO William Li said on the post-earnings conference call that Nio is “working on a mass-market new brand that will be positioned similar to Volkswagen and Toyota Motors Corp."NIO also has plans to launch three new models in 2022. "We want to provide better product and service at prices lower than Tesla Inc. (NASDAQ:TSLA),” the CEO added.

While earnings were strong, it was delivery numbers that set the tone for Thursday's losses. The YoY and even QoQ growth is good, but delivery numbers slowed versus a month earlier. This happened back in April and May before a rebound. The resistance at $47.39 remains key to get us out of the current bearish trend. NIO is down again in Friday's premarket and heading for a test of $38.66, the most recent low in this downtrend. Holding above this would be the first test for bulls and end the series of lower lows. Breaking $38.66 should see a test of our support zone at $32 and then $28. The support zone at $28 is the stronger one in terms of volume. 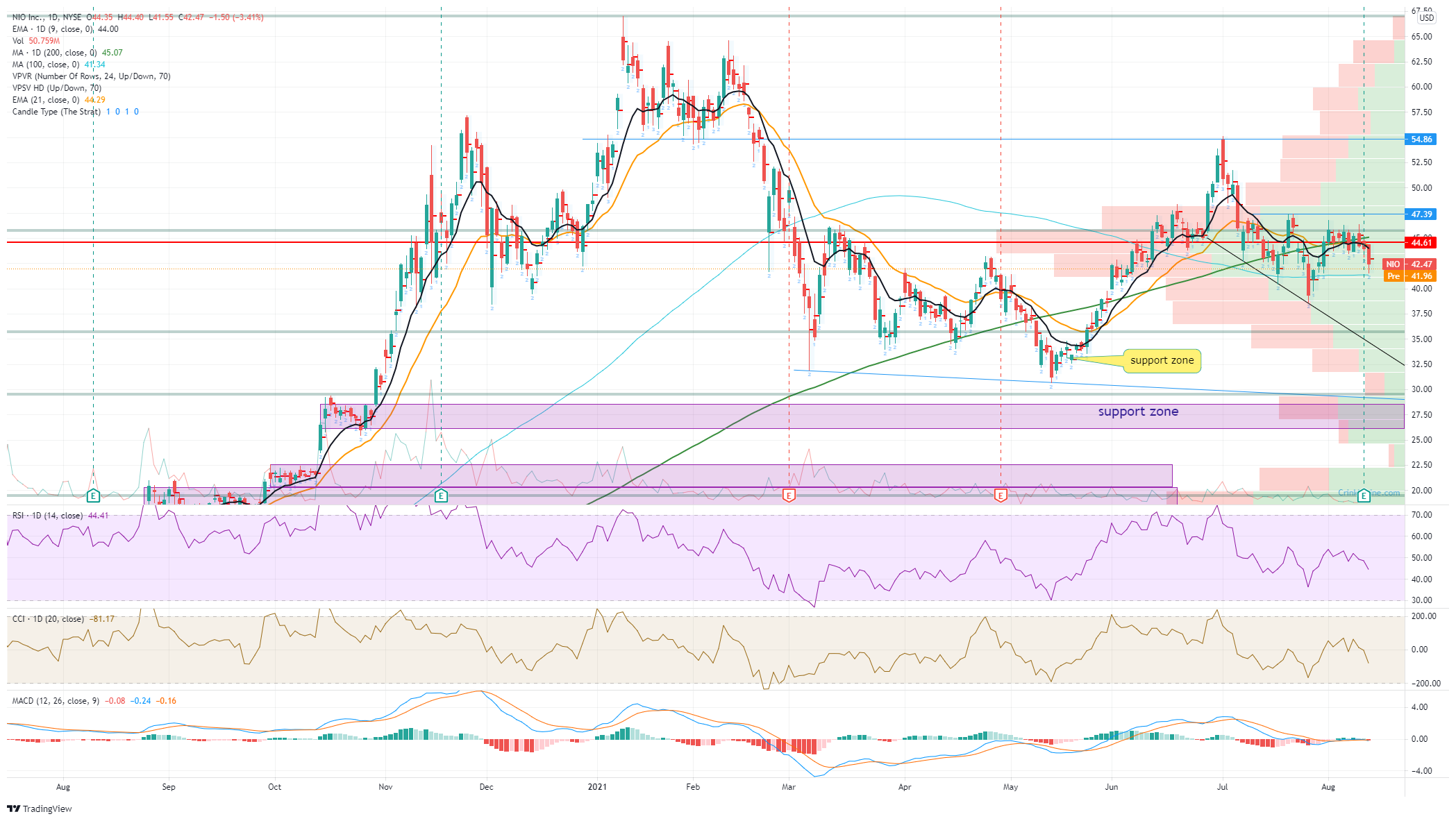