Update October 14: NIO rebounded just over 2% on Wednesday and recaptured the $36 mark, snapping a three-day downtrend. In doing so, NIO stock price hit the highest levels in two weeks, as the risk-on trading on Wall Street indices amid hotter US inflation and Fed’s tapering plan. Encourage fundamentals also helped NIO shares stage a rebound, especially after global Electric Vehicles (EV) leader Tesla announcing the production of a record volume of electric vehicles at its Shanghai factory in September.

We have been calling the bottom for the last few sessions now in NIO stock, and so far no one is listening to us! No surprise there, you might say, but hear us out.

This stock has one of the biggest upsides from the average of Wall Street analysts' price targets. Currently, Wall Street puts an average price target of $57.82 on NIO shares. That represents over 60% upside from the current NIO share price. We all know not to trust everything you read, especially from Wall Street, and the importance of doing your own research, but NIO has been overly caught up in the Chinese tech sell-off. It may be time to reconsider dipping back in.

One concern is the overall bearishness of the main market, a view we share, so buying stocks, especially a high-risk retail name such as NIO, is all about the timing. We take the easy road and give the stock an outperform versus a straight buy rating due to our current bearish stance on the broad market. Buying NIO and shorting the Nasdaq would be our preferred market neutral strategy.

As mentioned, Wall Street remains bullish on average and only last week Goldman Sachs upgraded NIO stock to Buy from its previous Neutral rating. Goldman put a $56 price target on NIO, a strong premium to current levels. Goldman was impressed by the potential for the new ET7 car from NIO, saying, "We believe Nio provides the visibility of strong volume expansion in the next six months, driven by the upcoming ET7 (China's priciest car model launched by a domestic brand), the Nio Day 2021 in Suzhou, the accelerating BAAS build-out, and the entrance into Norway."

The latest car data from China shows the headline disappointing investors with auto sales dropping 19.6% in September. However, drilling down, the data for electric vehicles was far more positive. EV, hybrid and hydrogen sales more than doubled in September.

We got our desired strong move to generate momentum last week when NIO shares surged nearly 7% on October 7. This, however, has yet to see some follow through. The Relative Strength Index (RSI) has broken the downtrend but remains below 50. The Moving Average Convergence Divergence (MACD) has crossed, giving a buy signal. NIO needs to break $36.78. This should draw in more momentum traders to kick-start the move higher.

FXStreet View: Outperform, the chart is bullish above $36.78. 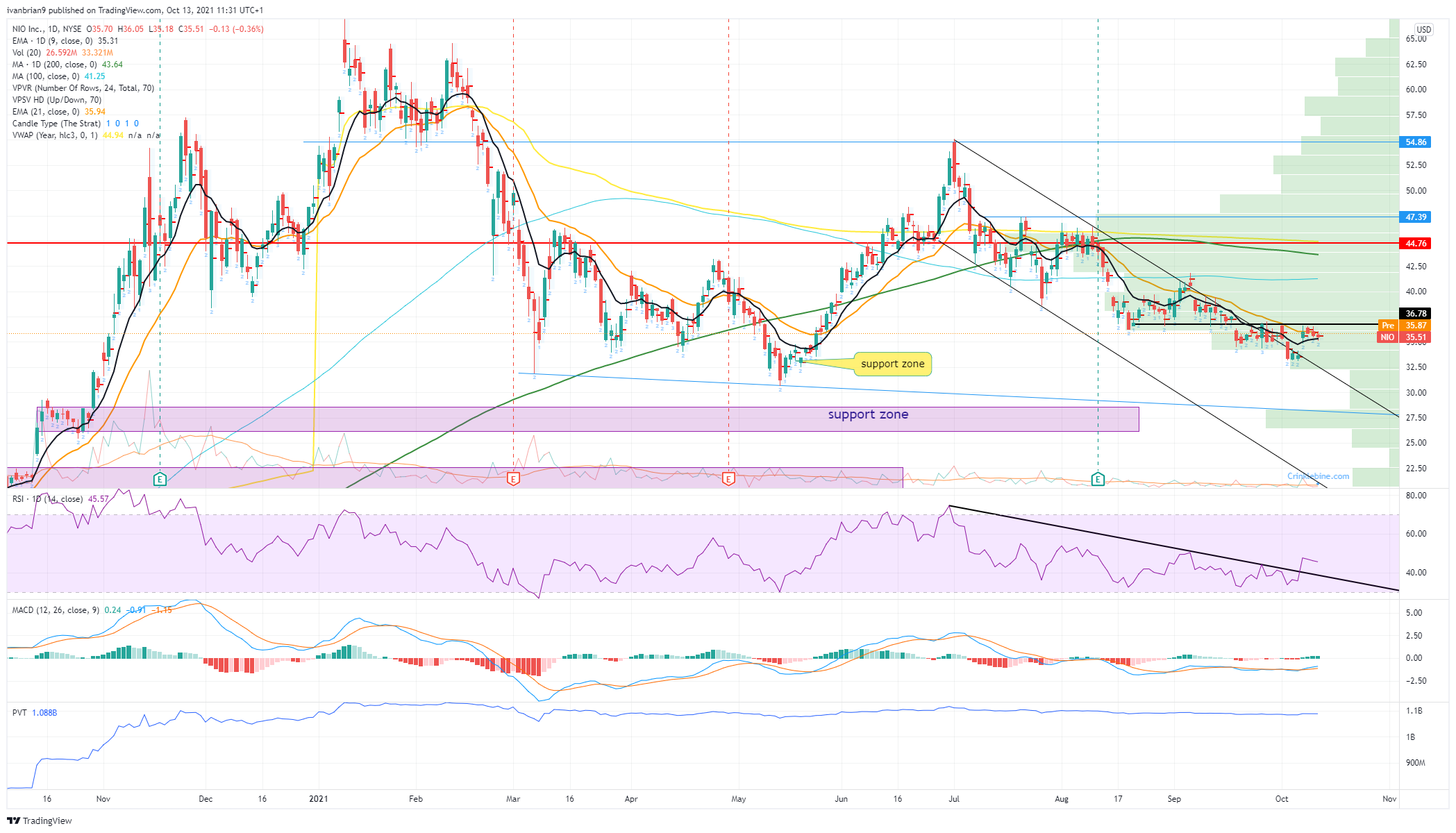 Update: NIO advanced 2.06% on Wednesday, to end the day at $36.24. The NYSE managed to add 70 points or 0.42%, with all major indexes closing in the green, except for the DJIA which ended the day unchanged. Stocks remained afloat despite US inflation was upwardly revised to 5.4% YoY in September, while the core reading was confirmed at 4%. Also, the US Federal Reserve unveiled the Minutes of its latest meeting. Policymakers hinted at tapering as soon as mid-November, with perspectives of ending asset purchases mid-2022.

EUR/USD is defending gains above 1.1600 ahead of the Eurozone Preliminary PMI reports. The market mood remains mixed amid rising inflation fears, the US stimulus and China Evergrande optimism. US PMIs, Powell awaited.

GBP/USD is trading close to 1.3800, underpinned by a pause in the US dollar’s recovery amid cautious optimism. Brexit and China Evergrande optimism help put a floor under the currency pair, as traders reassess BOE’s rate hike bets. Focus on UK data flow.

Gold flirts with $1,790 hurdle on mixed concerns ahead of US PMI

Gold refreshes intraday high to $1,787 during the four-day run-up amid early Friday. The yellow metal witnessed pullback the previous day amid firmer USD, on relation fears, but the latest sentiment-positive headlines seem to have favored the gold buyers.

Stock markets are marginally lower on Thursday, continuing the trend of choppy trade this week as we await more earnings reports. The results we've seen so far have been very encouraging and that's continued over the last 24 hours.