Update, February 19: Nio kicks off Friday's session with an upside swing and recaptures critical support mentioned earlier. NYSE: NIO is has hit a high of $55.92, topping $55.77 which was the previous low close in February. Ending the week above this level would serve as a positive sign. The broad S&P 500 Index has also moved higher, albeit only by 0.3% against over 2% for shares of the Chinese carmakers. Is it out of the woods? Not so fast. See why below.

Even the best rally may run out of road – even for electric cars that boast large mileage. Nio Inc (NYSE: NIO) has been on the back foot in the past week, falling all the way from the highs of $62.84 to close at $57.32 on Wednesday.

More losses are likely on Thursday. Premarket figures are pointing to another slide of over 3% to around $55.52.

Why is NIO falling? There are five main reasons, most of them related to the broader Electric Vehicle Sector.

1) Profit-taking: One of the drivers pushing the EV sector higher – with Shanghai-based Nio being one of the stars – has been hype among Reddit and Robinhood users. These groups often overlap. Enthusiasm around the growing sector and the lookout for the next "Tesla killer" has boosted shares of many firms, including NIO that was once dubbed "China's Tesla."

While the company run by William Li saw its shares slide in the past six days, it is still trading far closer to its 52-week high of $66.99 than its 52-week low of $2.11 Taking profits off the table – for the sector and for NIO – seems to make sense.

2) Presidential problems: The proposed new stimulus plan – worth as much as $1.9 trillion – has several positive implications for EVs. First, additional funds in Americans' pockets allow them to purchase more goods such as cars. Even if a small share of those stimulus checks goes toward buying vehicles, it could boost shares of small companies like NIO.

Moreover, successfully passing a relief bill would provide political credit to President Joe Biden, who can then move to more ambitious goals such as environmental initiatives. At the time of writing, the Commander-in-Chief is facing opposition from his own party. Joe Manchin, the most conservative Democrat in the Senate, has been expressing his opposition to some measures. If the final bill is smaller – or a mere delay – could suck out some energy needed for boosting green initiatives.

3) Crude comeback: While higher oil prices make renewable energies look cheaper in comparison, fossil fuels will likely remain essential for some time to come. The southern US, is suffering from a "deep freeze" storm that has paralyzed gas and wind-based power stations.

While the blame for blackouts cannot be put solely on windfarm failing to function, the narrative emerging from Texas is that oil is underestimated. That gives a boost to legacy vehicles and diminishes the appeal of EVs.

4) Musk demystified: Tesla is at the forefront of electric vehicles with its shiny models. However, funder Elon Musk is losing some of his magical touch and impact. The billionaire remains rich, but no longer the world's richest – as that title returns to Amazon founder Jeff Bezos.

Does peak Musk mean it is all downhill for the sector? Not so fast, but it contributes to the downtrend in EVs, including Nio. Moreover, Tesla's investment in Bitcoin tarnishes his reputation as electricity used to mine the cryptocurrency is often dirty one – contrary to the promise of environmentally friendly vehicles.

When Musk's image is on the descent, the sector suffers.

5) New toy in town: Nio may have been the original "Chinese Tesla" but there are other ones as well, competing for attention and hot money. The latest to join the frenzy is BYD (OTC: BYDDY) which is backed by living legend Warren Buffet. The wise investor's backing is pushing other people with spare cash into shares.

Another equity drawing attention away from NIO is Churchill Capital Corp IV (NASDAQ: CCIV) – a blank check firm that is reportedly mulling a SPAC merger with Lucid Motors. While this acquisition has yet to take place, the buzz remains elevated around Lucid – which was founded by a Tesla engineer. 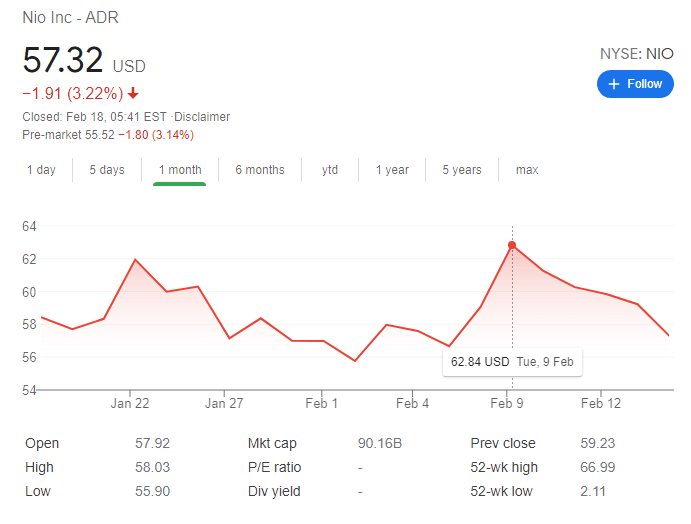 The factors mentioned above are mostly related to the sector at large rather than NIO. What news could push NASDAQ: NIO higher? The best bet would be developments related to the firm's sales, which have been robust in recent months. For those holding stock, the hope is that the next monthly report would boost shares – making the current slide a buying opportunity.

At the time of writing, the downtrend continues and a breach of the $56 level – February's lowest closing price – looks imminent. Further down, the round $50 mark is critical. Resistance awaits at 60, followed by $63 and the 52-week high of $66.99.

Update: Nio Inc (NYSE: NIO) has closed Thursday's session with a drop of over 5% to close at $54.43. This dive has taken shares of the Shanghai-based electric vehicle maker to a new February trough, below the previous close of $55.77 on February 2. The EV sector has slipped alongside broader stock markets. Friday's premarket trading is pointing to gains – 1.38% to $55.10. Nio's equity would need to recapture that $55.77 level to provide ammunition for the bulls.

Update: NIO shares continue to suffer in the wake of the CCIV, Lucid merger speculation. Traders are selling out of NIO to bet on Lucid. NIO is down 7% while CCIV is up 7%. Both stocks are heavily monitored on social media.