Update July 21: NIO staged an impressive intraday turnaround on Monday, which gave bulls some cause for optimism. As we can see from the update below, NIO stock was down over 4% in early trading on Monday but turned around in the afternoon to close up over 2%. A 7% intraday turnaround is definitely something to get bulls excited about, especially when the volume was toward the higher end of prices. Tuesday started off negative again but eventually bulls awoke and remembered Monday. They pushed NIO to close up again, this time by nearly 2% again. In the process the 200-day moving average is now back below us, and NIO is targetting the 9 and 21-day moving averages.

Update July 19: Can NIO find a new gear and shift upward? Not so fast. It seems that shares of the Chinese electric vehicle maker are still stuck in reverse. NYSE: NIO is trading some 4.4% down on the day, at around $41.36 at the time of writing. That completes a double-digit drop of some 12% in the past month. Apart from the broad market drop related to the Delta covid variant, the stock is on the back foot due to the DIDI saga, which has put Chinese stocks listed on Wall Street at the scrutiny of regulators on both sides of the Pacific.

NIO stock suffered a backlash from the DIDI fallout and has retraced to the 200-day moving average. NIO has thankfully found some support here, but the broader market is beginning to look more negative and this is providing a fresh headwind for NIO. The resistance at $54.86 worked perfectly and with the benefit of hindsight has set up the current bearish situation. The short-term 9 and 21-day moving averages have also been broken, and now the 200-day is the next big level.

Recent delivery numbers from all Chinese electric vehicle manufacturers were strong. LiAuto (LI) posted record June deliveries, up 166% YoY. XPeng (XPEV) posted a 439% yearly gain in deliveries, while NIO itself posted a yearly gain of nearly 116%. This had set the sector up for a strong early July, but NIO ran into strong resistance at $54.86.

The recent downtrend has been confirmed by the parallel correction in all major indicators. Releative Strength Index (RSI), Commodity Strength Index (CCI) and Moving Average Convergence Divergence (MACD) are all trending lower in line with the price. The sector remains weak on Monday with Tesla (TSLA) down 2% in the premarket, and where Tesla goes all electric vehicle stocks tend to follow.

A break of the 200-day moving average is a strongly negative signal, and NIO will then have a last chance at the 100-day moving average, currently at $41.24. This is the last area of strong volume on the profile chart, with strong volume until $37. Once $37 is broken the volume dimishes and the next support zone to wait for is the May low near $30. 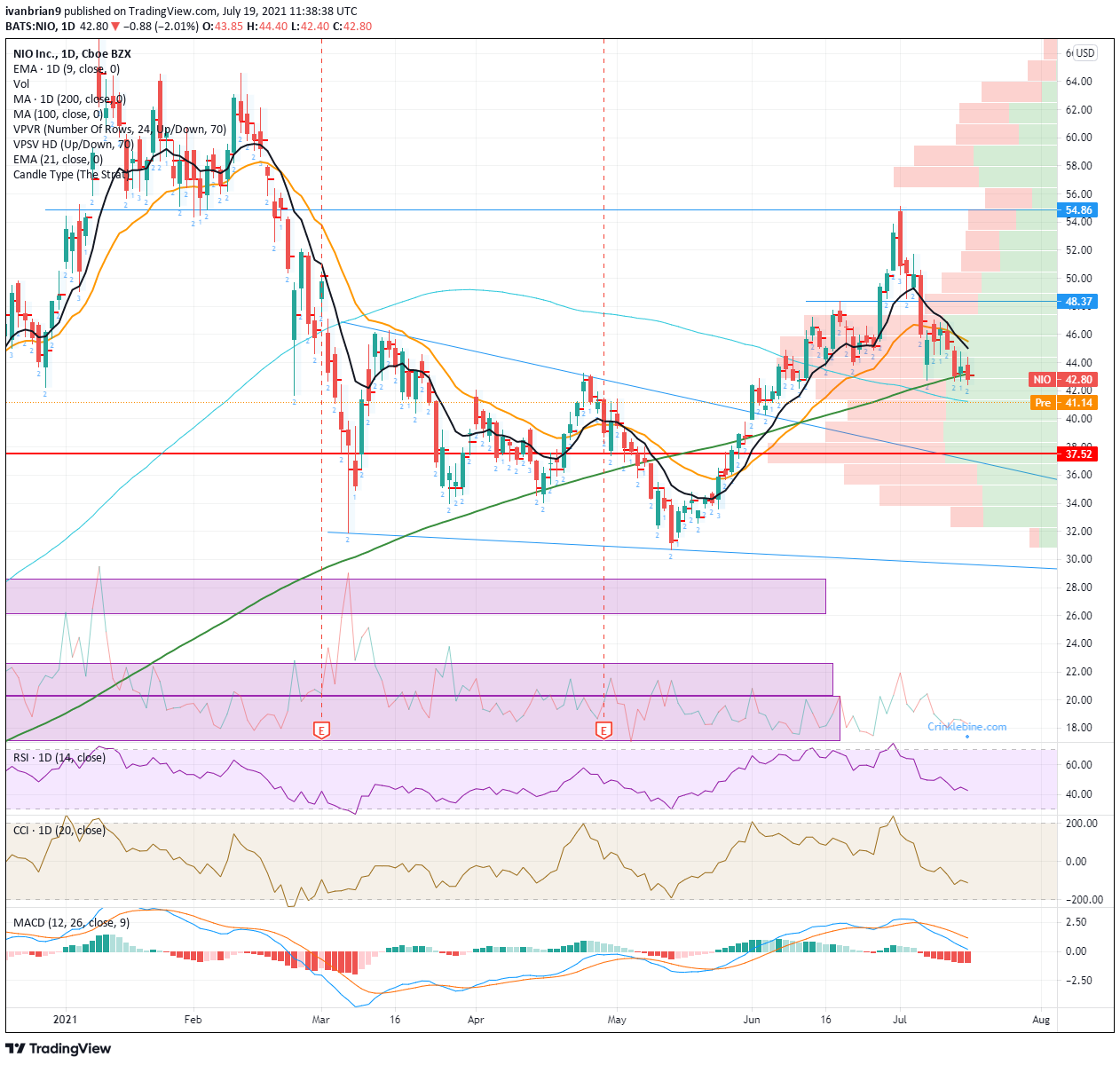