Alexious Lee is a name that investors in Li Auto Auto will learn quickly. Lee, an analyst at Jefferies, is not optimistic on the Chinese car firm due to its name, but rather looking at the firm's EREV Powertrain, which has been a commercial success. Moreover, Lee is bullish on future growth in the current year and also in 2022 – 100% and 86% respectively.

Jefferies' target price is $44.50, substantially above Li's closing price of $35.60 on Wednesday. Premarket trading indicates another increase toward $36 on Thursday, extending its gains.

Another factor playing in the electric carmaker's favor is the change of guard at the White House. President Joe Biden has offered a calmer tone to both Americans and the world, contrary to former President Donald Trump's feisty approach to China. Will that mean a different policy? Probably not, as both Democrats and Republicans share a disdain for Beijing's trade practices. However, the smoother tone means investors may have less noise to worry about.

Tesla's Elon Musk recently became the world's richest person – and perhaps his electric vehicle company has rich pricing. The search for the next Tesla has boosted shares of various EV makers, such as Nio, Nikola, and also Li Auto. 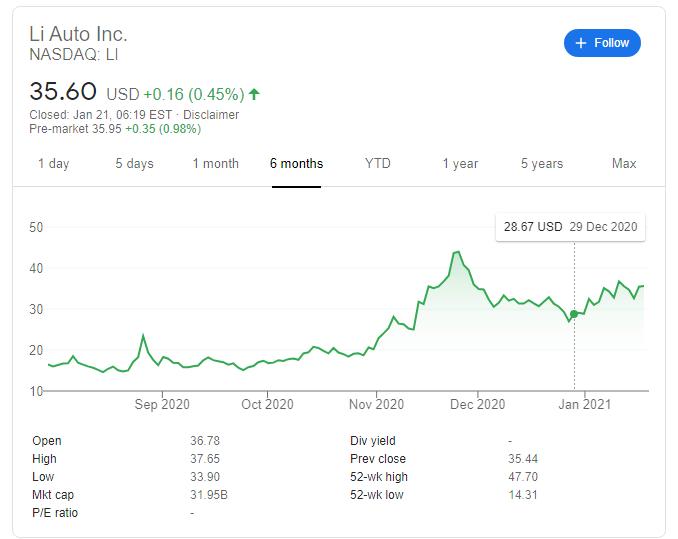