NASDAQ: LCID fell lower for the third time in the past four days this week, as the NASDAQ index continued to see volatility during Thursday’s session. Shares of LCID tumbled by 8.85% and closed the trading day at $41.41. The stock has moved below its 50-day moving average this week, which is generally seen as a short-term bearish indication. But perhaps most of Lucid’s weakness on Thursday was due to the NASDAQ plummeting lower by 2.51% as the tech-heavy index snapped its three-day winning streak. The Dow Jones fell by 176 basis points and the S&P 500 lost 1.42% in a bloody day for the broader markets.

Lucid is at a crucial time in its business life as its recently announced plans to expand into Europe and eventually, Saudi Arabia, means that the company needs to start scaling up production now. Lucid is in the midst of upgrading its production facility in Arizona, and has plans to build another factory in Saudi Arabia by 2026. Lucid has $7 billion in capital to help with its growth right now, after it raised $2 billion during a debt offering in late 2021. 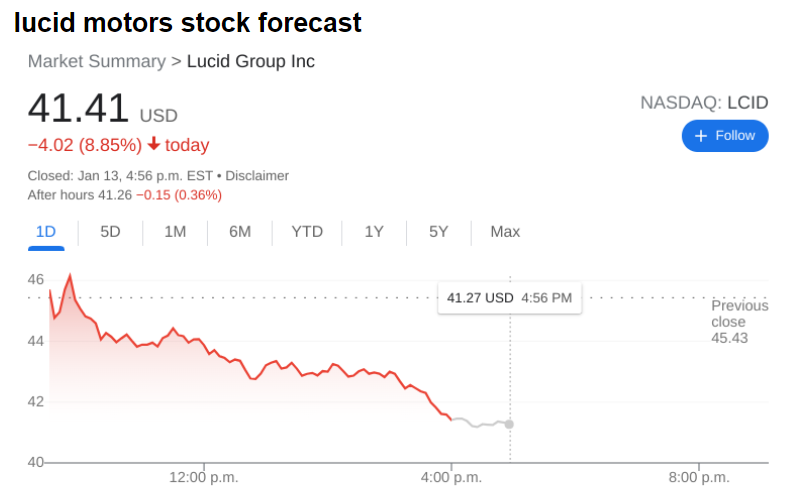 Tesla (NASDAQ: TSLA) saw its stock tank on Thursday as a couple of negative headlines seemed to have an impact on investors. Combined with the overall market weakness, Tesla’s losses seemed to drag down the rest of the EV sector. First, continued delays in Tesla’s production has led industry analysts to estimate that the long-awaited Cyber Truck won’t be ready in 2022 either. Furthermore, a teenage hacker in Germany has reported that he has been able to hack into 25 Tesla vehicles in 13 different countries around the world. He did state that it was due to precautions not taken by drivers, but it is still a concerning trend as we move into a world of autonomous vehicles.