Carvana (CVNA) stock has plummeted 34% in Wednesday's premarket after its major creditors signed a truce of sorts over the debt that they are owed. Once called the "Amazon of Used Cars", Carvana has seen its stock price descend 97% year to date. If the CVNA premarket trade carries into the regular session on Wednesday, then CVNA will be down 98% instead after starting the year near $240 a share.

Bloomberg is reporting that Apollo Global Mangagement and Pacific Investment Management (Pimco) have put together a cooperation agreement that includes about 70% of Carvana's total creditors. The agreement would force all the creditors to work together as one so as to preempt any nasty fight among lenders. Bloomberg notes that a number of bankrupt companies have played lenders against one another in recent years in order to gain better terms.

The agreement is said by sources to enforce cooperation by the unsecured debt lenders for at least three months and also includes such non-bank lenders as BlackRock, Ares Management and Knighthead Capital Management. Carvana's bonds, many of which are due between 2023 and 2027, are trading for less than 50% of their principal. This is often taken as a clear sign that bankruptcy is incoming.

Used car prices have been trending lower since the first half of 2022 after rocketing higher during the pandemic, which has greatly affected Carvana's business prospects. Generally, Carvana grew quickly as it used debt to purchase used vehicles from individuals and then attempt to hike the price before a resell. This business scheme does not work well, however, in a falling price environment. Additionally, much higher interest rates in the US that were introduced by the Federal Reserve to quell inflation have also greatly reduced the demand for all vehicles as monthly payment costs have risen. 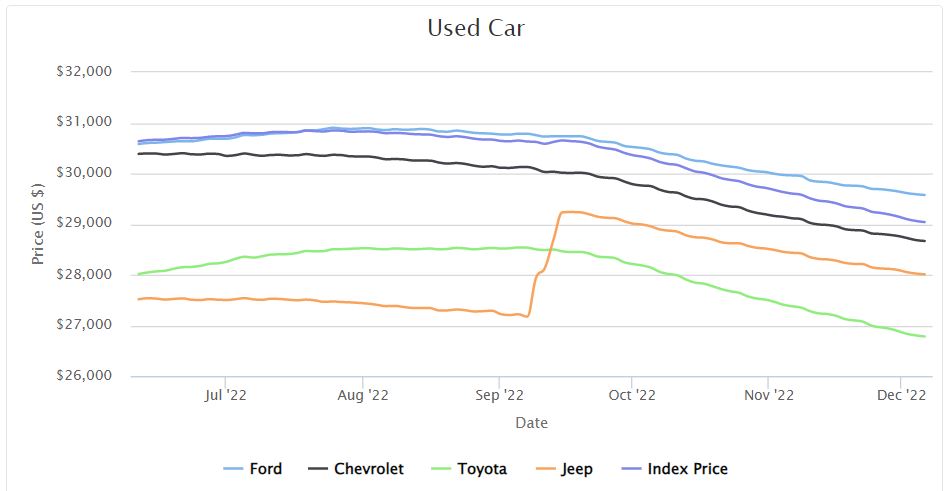 This all came to a head in early November when Carvana reported fiscal third quarter results showing a per share loss of $-2.67. After running much lower losses quarter after quarter, Carvana produced a single quarter of adjusted profit in the fiscal second quarter of 2021, but those more positive results were hard to repeat. Losses began mounting and grew worse from there.

I would not be one to catch this falling jalopy. When major creditors get together to draw up a binding agreement that only works in the case of your impending demise, the odds of a turnaround that saves shareholders is extremely unlikely. You might have a better chance buying up the belly-up crypto exchange FTX's FTT crypto tokens than making a profit on CVNA stock.

When Carvana stock originally IPO'd around $13 back in early 2017, CVNA had a rough start and traded slightly below $9 a share. These days it would take a 100% spike in the CVNA share price to make it back to that five-year-old support level.