The Gold Price is attempting to recover from the lows posted at the start of the North American day at $1,936. Federal Reserve Chair Jerome Powell's appearance at an International Monetary Fund panel is being monitored closely by traders as are comments from the European Central Bank's governor, Christine Lagarde.

So far, there has been no reaction to comments from either central banker. Both have been delivering much of the same rhetoric surrounding both their nation's economies and interest rate policies.

Also read: Fed Chair Powell: 50 bps rate hikes are on the table for the upcoming meetings

As for Lagarde, she explained that the meeting in June is ‘key’ for the end of APP and the potential rate path, adding that they need to wait on data before deciding on what to do next. The ECB is watching the value of the euro closely but Lagarde said that they are not targeting the FX rate.

Meanwhile, the euro has been a driving force in the forex space and has impacted the US dollar and the Gold Price on Thursday. The incumbent French President Emmanuel Macron's election debate was favoured in the polls, supporting the single currency. Additionally, the euro climbed to a more than one-week high on Thursday against the dollar after a spate of hawkish comments from European Central Bank officials raised bets that eurozone interest rates will rise soon.

Joachim Nagel, president of Germany's Bundesbank, joined a chorus of policymakers in saying the ECB could raise interest rates at the start of the third quarter.  More on this below, but the money markets, which had eased rate hike bets following last Thursday's ECB meeting, are now pricing in a 20 basis point (bps) rise by July and over 70 bps of tightening by year-end. That would take benchmark interest rates above zero for the first time since 2013 and this is offering support for the euro weighing down DXY which has printed a low of 99.818 on the day.

During the European session, the ECB Vice-President Luis de Guindos expressed that a rate hike in July is possible, while he sees no reason why APP could not end by July. On those remarks, the EUR/USD appreciated, while the German 10-year bund is approaching near 1% at the time of writing. Consequently, US Treasury yields jumped, led by the 10-year benchmark note, which bounced seven basis points, sits at 2.913%

In the meantime, yields on 10-year Treasury Inflation-Protected Securities (TIPS) remain negative at -0.08 bps after turning positive on Tuesday. If real yields (US 10-year nominal yields minus inflation expectations) keep rising, it could weigh on the non-yielding metal, which correlates negatively with the former. Additionally, the greenback recovered some ground, up 0.14%, and was last seen at 100.489, also a headwind for the yellow metal.

Aside from this, the Russia-Ukraine backdrop appears to influence market sentiment less than before. Russia reported the capture of Mariupol, while the Russian President Vladimir Putin ordered the cancellation of plans to storm the besieged Azonvstal plant in Mariupol. At the same time, the Ukraine Deputy PM demands Russia a humanitarian corridor for civilians in Azonvstal.

As the day goes by, the Gold Price (XAUUSD) is holding in a key support territory just shy of the 50-day moving average (DMA), around $1936.12. This is an area with the confluence of the trendline drawn from February 2022 lows. Bulls are stepping in at this point as per the hourly chart:

On Wednesday, XAUUSD jumped from that area and pushed near $1950, but failure at the latter and the Relative Strength Index (RSI) turning bearish (49.89 as of writing) opened the door for further losses

Therefore, XAUUSD’s first support would be the confluence of the 50-DMA and the upslope trendline drawn from February 2022 lows around $1935-40. A breach of the latter would expose the psychological $1900 mark, followed by March’s monthly lows around $1889.91. 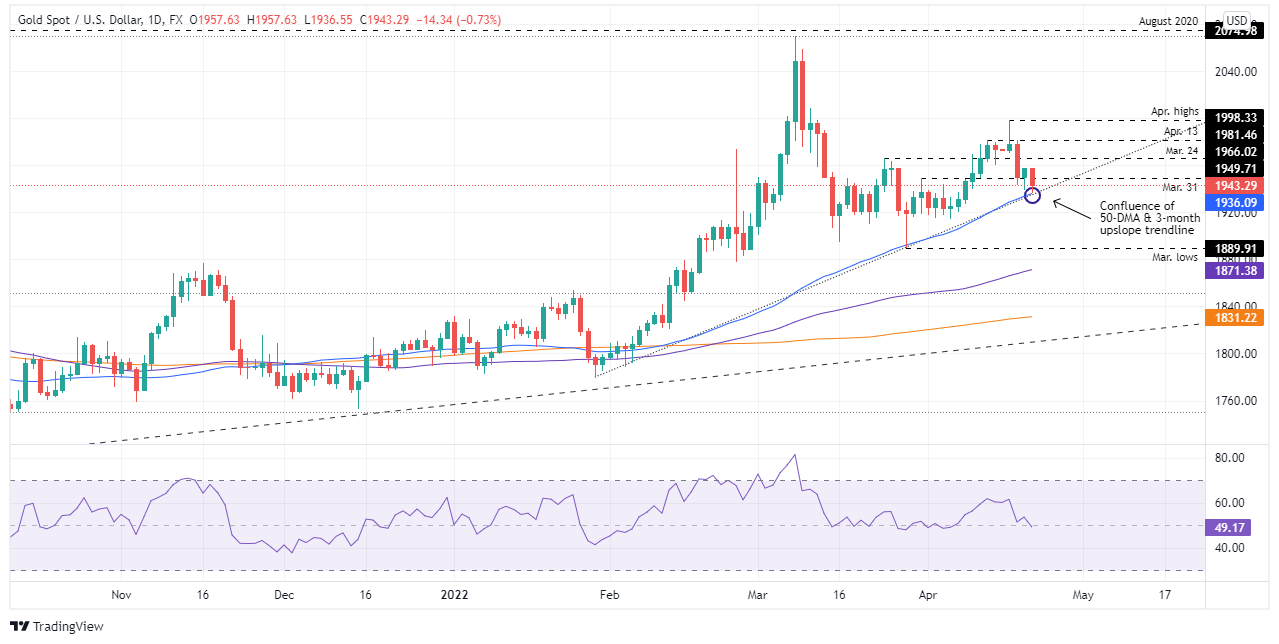