Update: Gold attracted some buying near the $1,742 area, or the lowest level since August 13, albeit struggled to capitalize on the attempted recovery move. Currently hovering around the $1,75-60 region, the risk-off impulse in the markets turned out to be a key factor that extended some support to the safe-haven precious metal. Investors remain worried about the fast-spreading Delta variant of the coronavirus and a global economic slowdown. This, along with the crisis at heavily indebted property developer China Evergrande, took its toll on the risk sentiment. Politics added to the uncertainty ahead of this week's Federal elections in Canada and Germany.

Apart from this, fears that the US government will run out of money as early as October without action on the debt ceiling further weighed on the sentiment. That said, a broad-based US dollar strength acted as a headwind for dollar-denominated commodities, including gold, and kept a lid on any further gains, at least for now. The USD continued drawing support from expectations that the Fed would begin rolling back its massive pandemic-era stimulus sooner rather than later. Hence, the key focus will remain on the outcome of a two-day FOMC monetary policy meeting starting on Tuesday. Investors will look for clues about the likely timing of the Fed's tapering plan, which, in turn, will provide a fresh directional impetus to the non-yielding gold.

Previous update: Gold price is making a minor recovery attempt from six-week lows of $1742 amid a retreat in the US Treasury yields, as the risk-off mood remains at full steam. The benchmark US 10-year yields are down about 2% so far. Escalating tensions surrounding indebted China’s property developer Evergrande and risks of a global economic slowdown weighs on the investors’ appetite for riskier assets. However, the further upside in gold price appears elusive, thanks to a broad-based US dollar strength, as the Fed’s tapering expectations and risk-aversion underpins the greenback’s safe-haven appeal.

Looking forward, gold price will remain exposed to downside risks, as investors prefer to hold the US currency ahead of this week’s Fed policy decision.

Read: Why XAU/USD appears vulnerable heading into the Fed showdown?

The Technical Confluences Detector shows that gold price is challenged by stiff resistance around $1755 on its road to recovery. That level is the convergence of the Fibonacci 61.8% one-day and Bollinger Band one-hour Upper.

If the recovery gains momentum, then gold bulls could threaten the upside barrier at $1761, where the Fibonacci 38.2% one-day and Fibonacci 23.6% one-week coincide.

The recovery is likely to remain limited so long as gold price holds below the critical $1770 resistance, which is the Fibonacci 38.2% one-week.

Alternatively, the immediate downside appears cushioned by the previous day’s low of $1747, below which $1742 could come to the rescue of gold bulls.

At that point, the previous low four-hour and Fibonacci 38.2% one-month intersect.

A sustained move below the latter could expose the $1735 support area, which is the confluence of the Fibonacci 161.8% one-day and pivot point one-day S2. 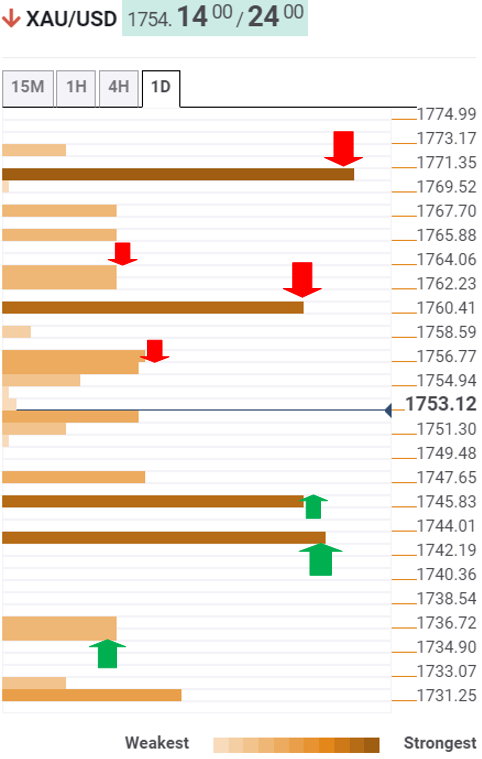