At $1,825, the gold price is 0.8% higher, climbing from a low of $1,786.78 and reaching a high of $1,826.40. The gold price has been recovering in the face of a softer US dollar after closing out a week that saw its biggest weekly drop in close to a year. Risk assets are desperately seeking some stabilisation after seven consecutive weeks of losses across global shares and exacerbating market concerns over the combination of a global economic slowdown, higher inflation and monetary tightening.

However, the greenback has been consolidating after its recent strength and trading in the dollar may be muted partly as investors move to the sidelines while waiting for key events such as the US Retail Sales and the Federal Reserve Chair Jerome Powell both scheduled for Tuesday. ''With the Fed telegraphing their every move, Fedspeak this week will be increasingly important, particularly as gold positioning is continuously squeezed with bearish sentiment building,'' analysts at TD Securities explained.

Meanwhile, defensive dollar positions have seen Speculators’ net long USD index positions edging up to the highest levels since mid-February. "Haven demand for USDs combined with expectations for progressive Fed rate hikes this year suggests the USD has the potential to remain well supported for some time," analysts at Rabobank argued. Recent data has all but endorsed the prospect of more aggressive tightening by the Fed, and this week's Retail Sales, Industrial Production and housing figures should b are anticipated to show that the US economy remains in a good place.

"We look for retail sales to advance firmly in April (1.5%), continuing with the monthly gains registered so far this year,'' analysts at TD Securities said. ''Spending was likely aided by a strong rebound in auto purchases and an increase in control group sales. We also look for a 1%+ MoM gain in the eating/drinking segment (i.e. bars & restaurants) as consumers continue to transition away from goods spending.''

With regards to gold, the analysts say precious metals sentiment becoming increasingly bearish. ''Even with recent liquidations accounted for, positioning analytics still argue for the potential of additional pain for gold bugs. While position sizing has reverted to more normal levels, the number of traders long the yellow metal remains elevated, while the breadth of traders short has just started to rise from near-record lows.''

''Importantly, CTA trend followers have also joined into the liquidation party, and with prices now below the bull-market-defining uptrend as we expected, a significant liquidation event may now be unfolding as these funds target a large net short position.''

As per the pre-open analysis, Gold, Chart of the Week: Bulls are moving in, but weekly levels are eyed, the bulls have moved in but they are staying in control, exceeding piercing the first level of 4-hour resistance and taking on the next cohort of potential offers: 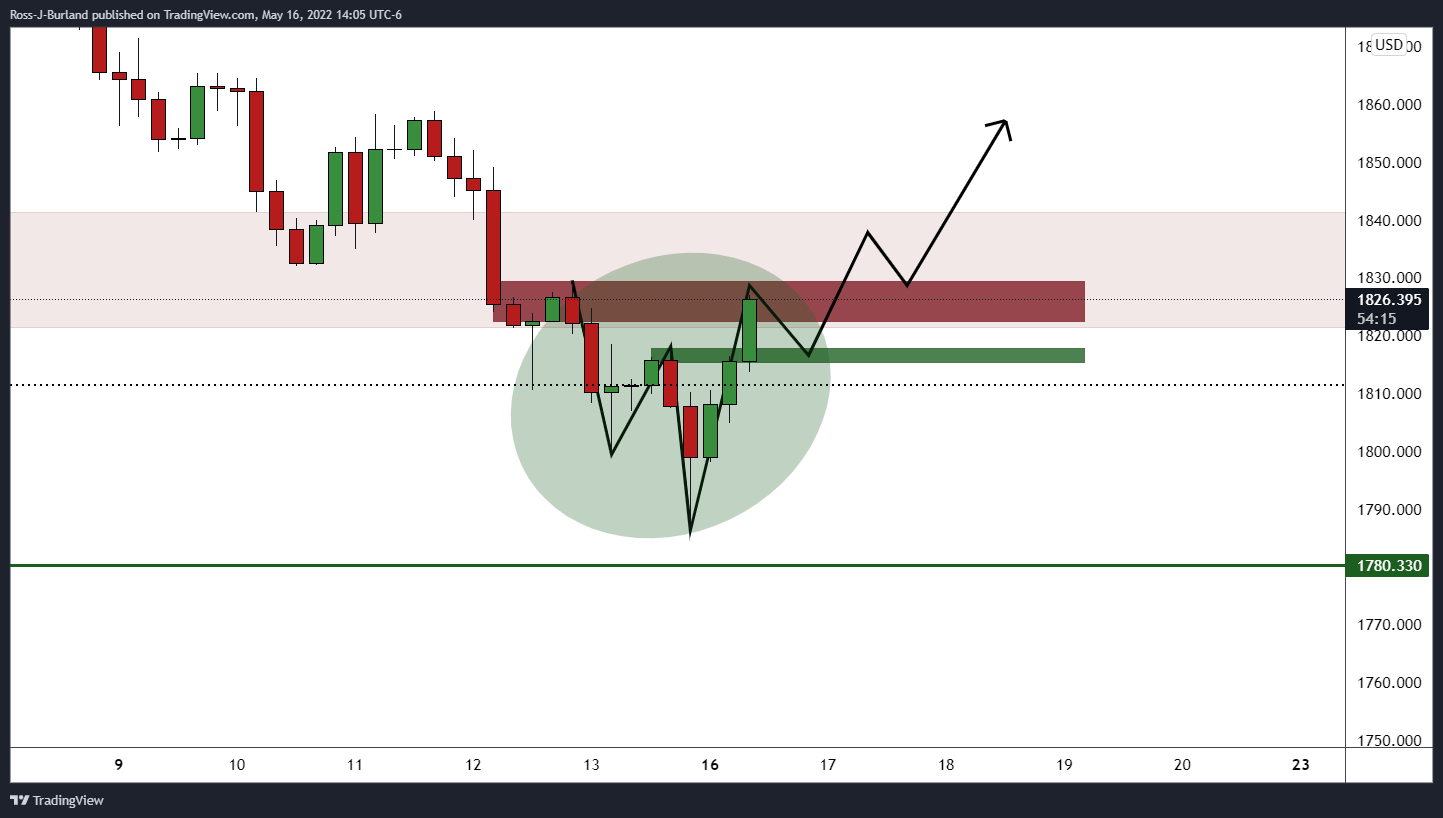 However, despite the move higher, the W-formation is a reversion pattern, so there could be a revisit to the neckline before a follow through to the upside for the sessions ahead if the support structure holds. In doing so, this will lead to a firm correction of the daily bearish impulse as follows: 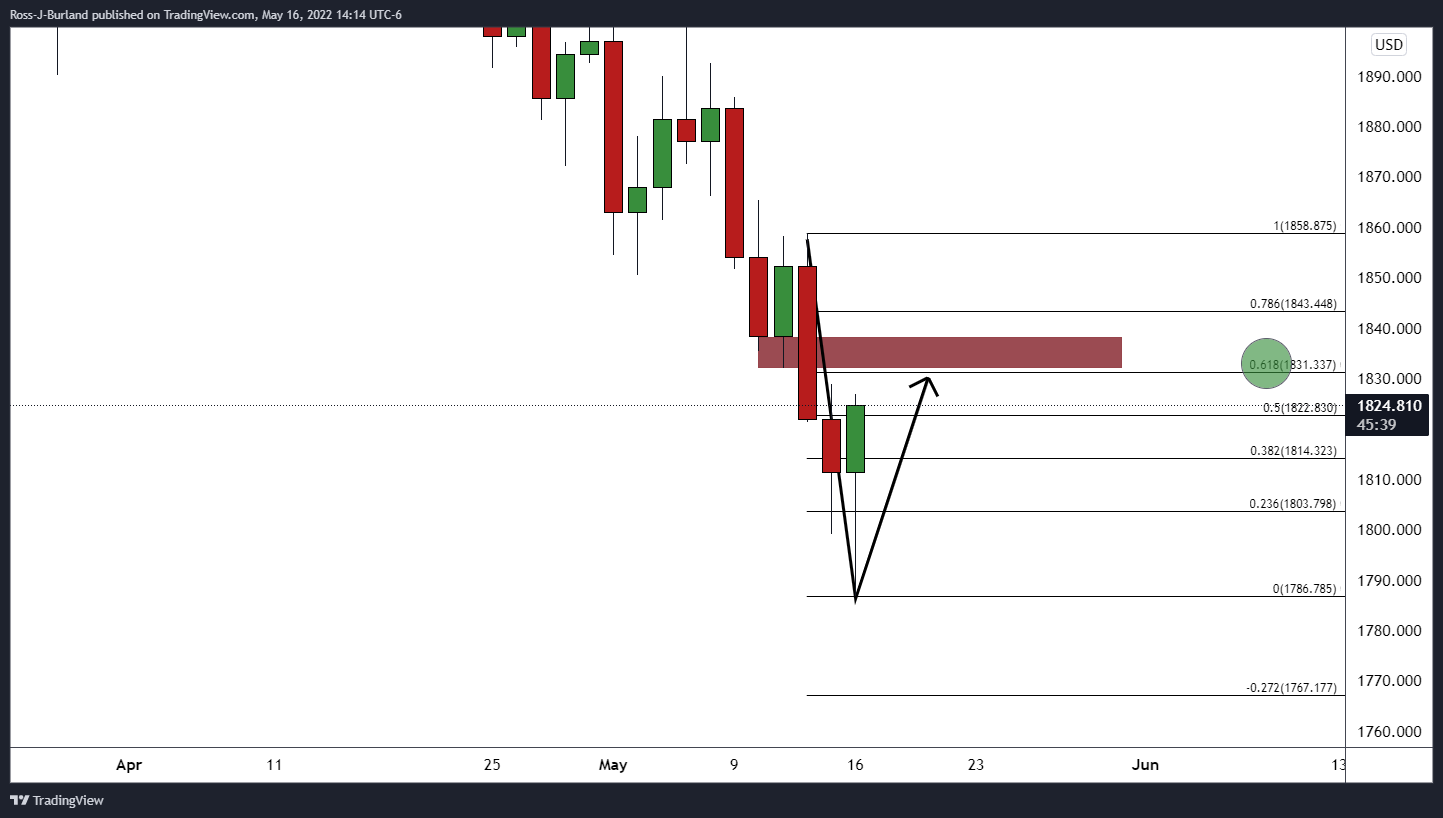