NYSE:GME seems to be a financial phenomenon that just refuses to go away following its epic retail short squeeze event earlier this year. On Monday, GameStop was back at it again, as the video game retailer added 12.93% to close the trading session at $180.60. GameStop shares have reversed the downward trend as of late and the latest bullish turn has seen the stock once again rise above its 50-day moving average price. The stock is still a far cry from its January high price of $483.00, and many would argue its current price levels are just as over inflated, considering it traded at a 52-week low price of $3.77 last year.

On Monday, the hashtag #AMCSqueeze continued to trend across social media outlets like Twitter and Reddit, as AMC (NYSE:AMC) grabbed the meme stock spotlight from GameStop. Retail investors are trying their best to initiate another short squeeze event for AMC, and other popular Reddit stocks like GameStop, CCIV (NYSE:CCIV), Palantir (NYSE:PLTR), and Naked Brand (NASDAQ:NAKD) all benefited. AMC saw some of its highest volume ever with over 146 million shares trading hands on Monday, as the stock gained 7.47% during the session. 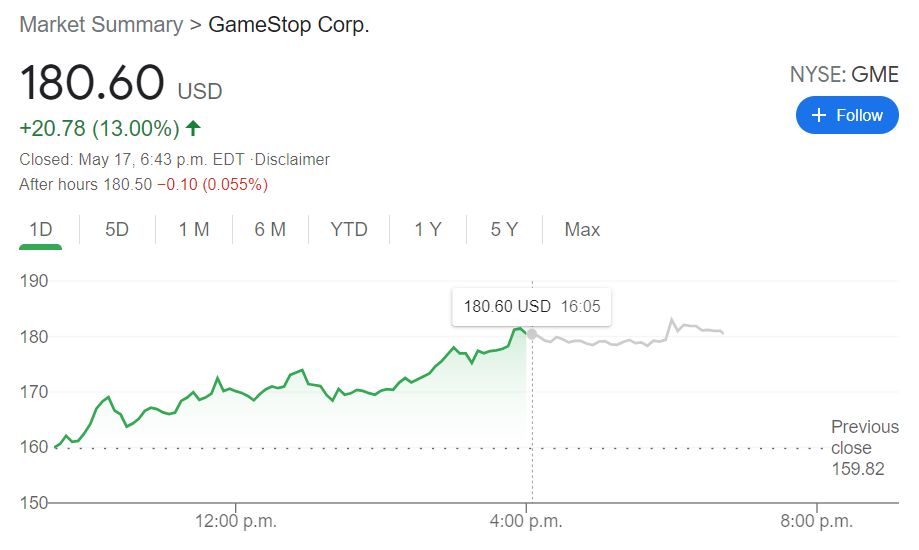 Private investment firm Sessa Capital openly disclosed a $352 million put option position that it currently holds in GameStop, which equates to roughly 14% of its total portfolio. While shorting a company like GameStop may seem like a sound financial move given its current stock price, the volatility and risk that comes with taking on the Reddit investor army is a risky proposition to say the least.