NASDAQ: GGPI surged higher during the final trading session of the week, as GGPI managed to eke out a 1.2% rise during the past five trading days. On Friday, shares of GGPI rose by 13.24% and closed the trading week at $10.09, firmly back above the $10.00 SPAC NAV price. Investors were undecided on Friday, as the quarterly quadruple witching day sent the major averages in separate directions. The Dow Jones dropped lower by 38 basis points, while the NASDAQ jumped higher by 1.43%. The S&P 500 was mostly flat, gaining 0.22% but still posting its worst trading week since March of 2020.

GGPI and Polestar shareholders will vote on June 22nd for the de-SPAC merger of the two companies. This will see Polestar become a publicly traded company, likely on the NASDAQ exchange. Ahead of the vote, Polestar has been in the headlines, unveiling several new electric vehicle models and issuing a press release on the state of the company. Polestar is an established EV brand unlike previous EV SPAC mergers, and has the backing of both Volvo and Geely Motors on the international stage. 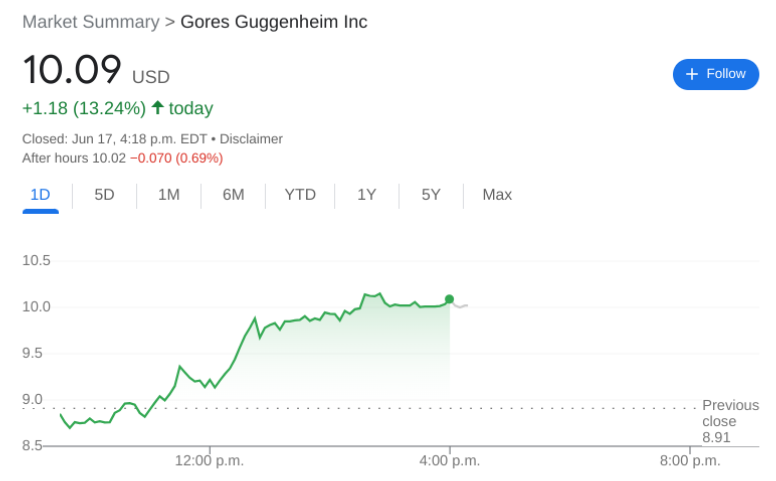 It was another tough week for Tesla (NASDAQ: TLSA) CEO Elon Musk. First, Musk was targeted by a letter from SpaceX employed that his behavior was a distraction to the workers. Musk was then issued a class action worth $258 billion for allegedly pumping DogeCoin in a crypto pyramid scheme. Finally, Tesla was forced to raise prices again on its vehicles in the US to battle rising supply costs. Shares of Tesla were up 1.72% during Friday's session.