The British pound rebounded from intraday losses in the mid-North American session, though it failed to reclaim the 1.3200 mark, courtesy of a risk-on market mood, Fed hawkishness, and Bank of England’s rate hike, with one dissenter, perceived as a dovish increase. At the time of writing, the GBP/USD is trading at 1.3187.

Late in the North American session, the market sentiment improved, boosting appetite for risk-sensitive currencies like the GBP. Nevertheless, amid an increased appetite for the greenback, disappointing data coming from the UK put a lid on the GBP/USD recovery.

The UK economic docket reported the UK’s Retail Sales, which declined by 0.3% in February, lower than the 0.6% increase expected and trailed January’s 1.9% reading. Furthermore, sales excluding petrol fell 0.7% in February and missed forecasts with around a 0.5% increment estimate.

Meanwhile, across the pond, two commercial banks expect the US central bank to hike 50-bps. On Friday, Goldman Sachs and Citigroup expressed that they estimate that the Federal Reserve would hike 50-bps in the meetings of May and June, which would lift the Federal Funds Rate (FFR) to 1.50% by the end of the first half of the year.

The bank’s forecasts come at what Fed policymakers expressed during the week, led by Fed Chairman Jerome Powell, openness to increasing rates by more than 25 bps, as he spoke at the NABE conference on Monday.

The US economic docket featured Pending Home Sales for February shrank 4.1% from a 1% m/m increase expected. Furthermore, the University of Michigan Consumer Sentiment Final for March came at 59.4 from 59.7, while inflation expectations stayed at 5.4% vs. 4.9% on the previous report.

The GBP/USD failure to reclaim the 1.3200 mark for the second-consecutive day left the pair vulnerable to further selling pressure. Furthermore, the Relative Strenght Index (RSI) oscillator is at 44 at bearish territory, aiming down, signaling that the GBP/USD might add to losses in the coming days, as month-end flows towards the greenback might extend the fall. 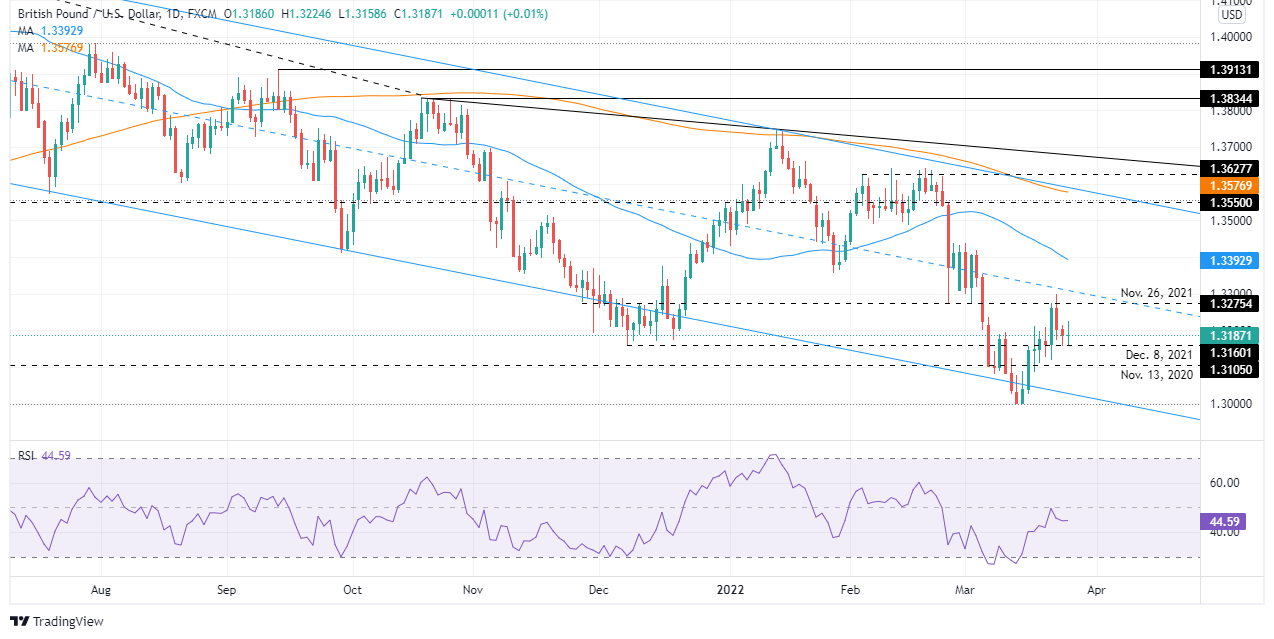 Gold falls toward $1,750 amid rising US T-bond yields

Gold price came under renewed bearish pressure and declined toward $1,750, erasing a large portion of the daily gains. Ahead of FOMC Chairman Powell's highly-anticipated speech, the 10-year US T-bond yield is up more than 1% on the day, weighing on XAU/USD.