The British pound rallies and recovers substantial ground, in the North American session, amidst an upbeat market mood, despite continuing fighting between Ukraine and Russia and a busy week for the US economic docket weighed by inflationary measurements weighing on the greenback. At the time of writing, the GBP/USD is trading at 1.3098.

The US docket witnessed the Consumer Price Index (CPI) on Tuesday, which rose above the 8.5% threshold for the first time since 1981, while inflation excluding food and energy, the so-called core CPI, rose by 6.5%, lower than the 6.7% estimated. The figures show that inflation is stubbornly high, but the core CPI showed that, in fact, prices easied in comparison with forecasts. That spurred a reaction in money market futures derivatives, as traders easied the 220 basis points Fed aggressive tightening to 200 by the end of the year.

In the meantime, on Wednesday, prices paid by producers (PPI) in March rose 11.4% y/y, the most since 2010, above all estimations and emphasizing inflation is stickier than expected, as producers are about to pass costs to customers. Excluding volatile items like food and energy, the so-called core PPI rose 9.2% y/y, higher than the 8.8% foreseen, in contrast to the last core CPI report, which showed that inflation might be near peaking.

Sources cited by Bloomberg said that “[D] despite the sigh of relief from yesterday’s core CPI reading, this is concerning,” and added that a “50 bps is starting to feel commonplace.”

Elsewhere, the UK economic docket also featured inflation figures, led by the Inflation Rate for March, which expanded by 7%, in line with expectations but higher than the March 6.2%, the highest in 30 years.

Money market futures have priced in a 25 bps rate hike by the Bank of England’s meeting on May 5. However, it’s worth noting that Deputy Governor Jon Cunliffe voted for no change at its last meeting, a move widely unexpected by investors, which weighed on the GBP prospects and pushed cable towards its YTD low around 1.2979.

The GBP/USD appears to have formed a double bottom in the daily chart, but as long as the daily moving averages (DMAs) reside above the exchange rate, the pair is downward biased. Nevertheless, it's worth noting the aforementioned.

If GBP/USD bulls lift prices above March 23 1.3298 swing high, then the double bottom could be confirmed and would target 1.3600. 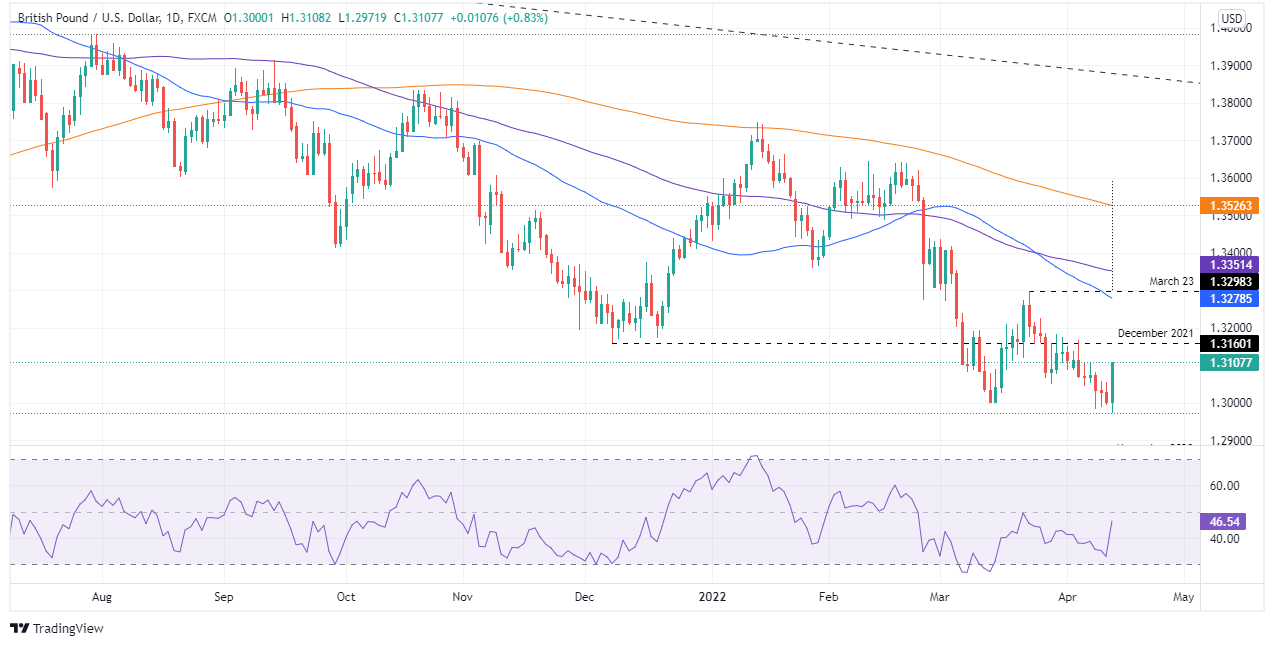