NYSE:F has reversed its fortunes of late and has emerged as a relevant stock once again as investors begin to see the value in a foundational automotive company that is reinventing itself. On Friday, the stock traded flat for most of the trading session, mirroring the performance of the broader markets which retreated by the closing bell after earlier gains. Shares of Ford are now up over 35% so far in 2021 as Wall Street interest in the once struggling automaker has skyrocketed since making moves in the electric vehicle sector.

Ford received a nice bump this week after JPMorgan analyst Ryan Brinkman released an upgrade on the stock from "neutral" to "overweight", and increased his outlook with a new price target of $14. This represents a solid 20% increase from the closing price on Friday, as Ford continues to gather momentum ahead of its quarterly earnings report on February 4th. Brinkman justified his positive forecast by citing Ford’s hot new lineup of vehicles that are about to hit the markets, specifically the re-invented Ford Bronco SUV, the Ford Mustang Mach-E electric sports car, and the best-selling Ford F-150 which is also unveiling an electric version in the next year. 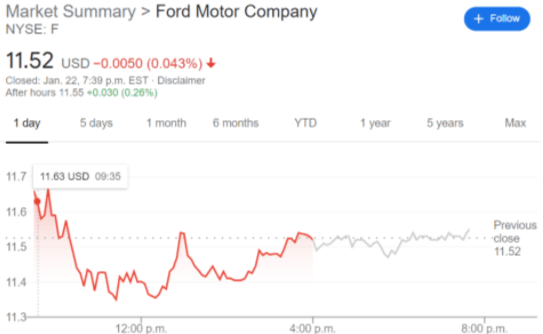 Ford’s stock hit a three-year high recently and has rallied alongside another iconic American automaker having a resurgence: General Motors (NYSE:GM). GM recently hit new all-time highs as the stock surged through the $50 mark for the first time in the company’s long history. Could 2021 be the return of the classic automotive brands? Perhaps more accurately, the automotive industry is finally playing catch up to electric vehicle makers like Tesla (NASDAQ:TSLA).