Update April 16: Coinbase is a cryptocurrency exchange that may suffer lower trading volume when digital assets lose steam. Bitcoin is changing hands under $62,000 and Ethereum is cooling under $2,400. Nevertheless, traders are encouraged by a second investment by ARK – Cathie Woods' fund – which has already accumulated hundreds of millions worth in shares. NASDAQ: COIN is rising on Friday, moving up from the $322 handle to $327. Volatility may pick up closer to the end of the day.

Coinbase launches on Wednesday on the Nasdaq to much investor anticipation. The crypto sector has been one of the most revolutionary developments to financial markets this century as Bitcoin steadily inserts itself into the mainstream. Companies are increasingly making Bitcoin part of their future plans with Goldman Sachs, VISA, Tesla and others all getting on board.

Bitcoin has split investors' opinions between those who see it as a revolutionary development, wresting control from traditional government-controlled currencies to those, perhaps more traditional investors, who see it as an unregulated hype. Either way, the rise of Bitcoin cannot be avoided and COIN listing on the Nasdaq further inserts the crypto sector into the mainstream investor consciousness.

Bitcoin has had a stellar 2021 and, in perfect serendipity, set another new record high on Tuesday, just in time for this Coinbase IPO (well direct list!)

Coinbase was founded in 2012 and has a near 12% share of the crypto market according to regulatory filings. Coinbase has 56 million users.

Coinbase will trade under the ticker COIN on the Nasdaq. The listing price is set at $250. Coinbase is to have 261.3 million shares outstanding when it goes public, giving it a market capitalization of nearly $68 billion. This is a steep rise from the private fundraising undertaken by Coinbase in 2018. This fundraising valued Coinbase at around $8 billion. Clearly, valuations and the underlying value of Bitcoin have moved on since 2018.

Coinbase has made known in its listing documents with the SEC that, in private transactions between January and March during this year, shares in COIN were trading at an average of $343.58.

The latest results from Coinbase show just how tied the company's revenues are to the underlying crypto leader Bitcoin. As BTC doubled in price in the first quarter of 2021 so Coinbase's revenue has surged. COIN said revenue for Q1 2021 will likely be $1.8 billion versus $1.3 billion for the full year 2020.

Coinbase has gone for what appears to be a relatively conservative valuation based on the futures contracts that trade in Germany on the COIN price. These contracts are admittedly highly illiquid but have been trading at a valuation as high as $130 billion recently. Goldman Sachs is the lead investment bank handling the direct listing for COIN. Goldman, along with the Nasdaq exchange, has set the $250 reference price. JP Morgan, Citi and Allen & Co have also been on the ticket advising Coinbase in relation to the public listing.

Post-release of Q1 estimates, DA Davidson upped its price target for COIN to $440. DA Davidson was the first broker to initiate coverage on COIN. It is easy to picture how much COIN's revenue is highly correlated to Bitcoin BTC=BTSP, and DA Davidson says "product experience and best-in-class compliance and regulatory controls should provide a defensible moat" the broker added.

Moffett Nathanson also began coverage of COIN ahead of the direct listing, putting a solid $600 price target on COIN. “We view Coinbase as a leading technology infrastructure provider for the cryptocurrency ecosystem, providing essential building blocks to facilitate the use of cryptocurrencies, including market-leading crypto storage and exchange capabilities."

This will be one to watch, as COIN price will not open at $250 as it would in a traditional IPO. Instead, the price will open at a level determined by the market makers where the largest number of orders can initially be executed. Roblox also went public in 2021 via a direct listing. In RBLX case, the reference price was set at $45 but the stock began trading at $64.50. The reference price is merely that, a reference. Given Bitcoin's ongoing march higher on Wednesday, trading at $64,500 at the time of writing, COIN is likely to open appreciably higher than the reference set. Broad markets are bullish, crypto markets are bullish and investor enthusiasm for the crypto sector is at all-time highs.

Investors and traders will likely be attracted by the initial volatility. Depending on your view on Bitcoin and the overall market, some investors will take long-term positions, some will trade the short-term volatility. Either way risk control is paramount in new listings, as volatility is likely going to be high. 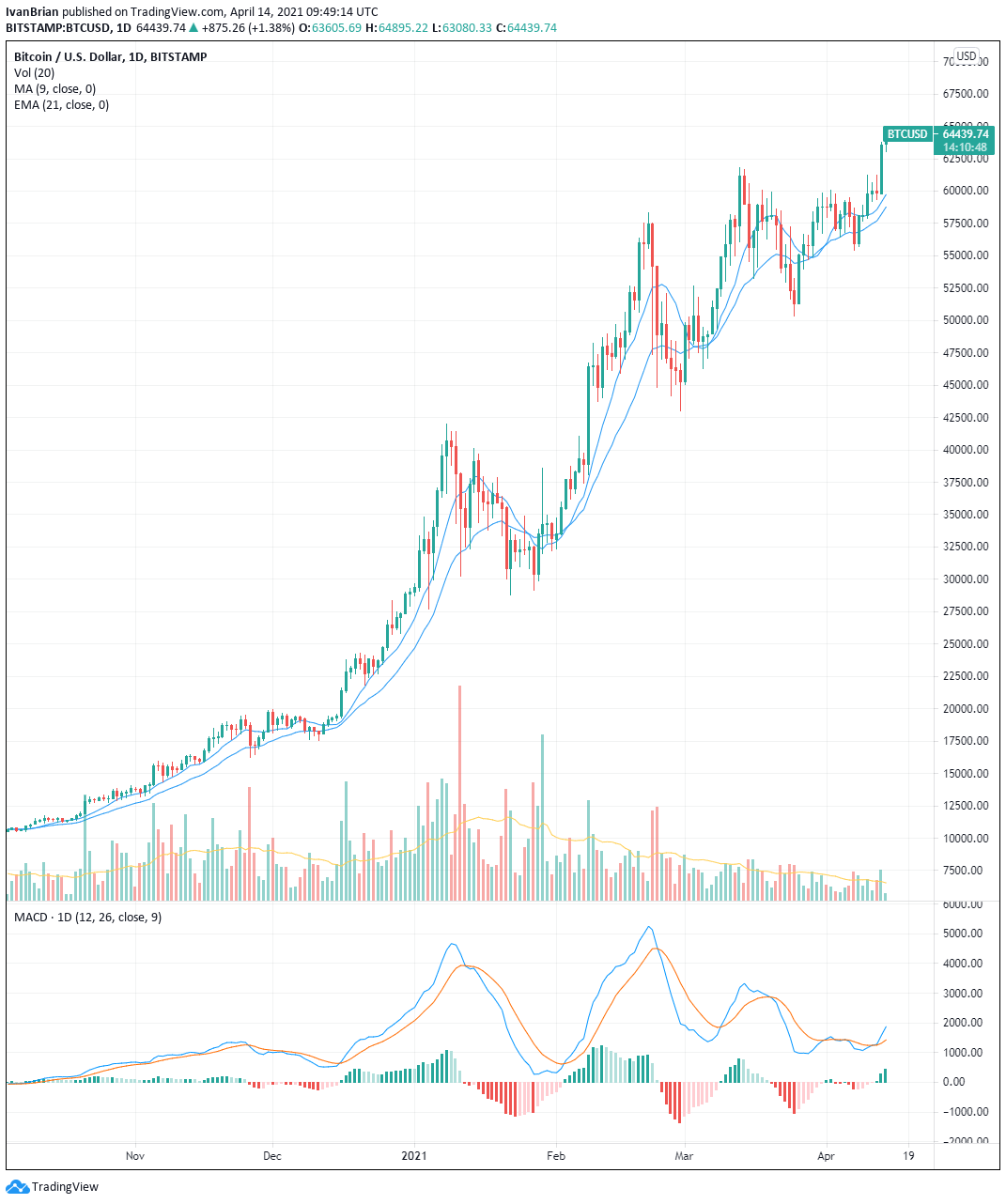 Update April 16: While shares of Coinbase Global Inc (NASDAQ: COIN) ended a turbulent trading session on Thursday with a 1.7% fall, they are expected to bounce on Friday. Cathie Woods' ARK has topped up its position in the cryptocurrency exchange company, pouring in $110 million. According to Reuters, that adds on to the $245.9 million purchase on Wednesday. The influential investor's move may be attributed to an increase of 1.7% in the after-hours trade, and premarket moves may add to the frenzy.

Update April 15: Conbase Global Inc (NASDAQ: COIN) has kicked off Thursday's trade with an upswing, partly owing to an investment by ARK. The fund run by renowned investor Cathie Woods sold off holdings in Tesla and jumped on Coinbase. However, Woods stated that high volatility is set to persist. It is essential to note that COIN is off the daily high near $350, which may worry those who bought share above $400 on Wedensday and suffered losses.

Update April 15: Coinbase Global Inc (NASDAQ: COIN) has closed its debut day on Wall Street at $328.28, and it is expected to surge by over 10% to $363 on Thursday, according to pre-market data. High volatility in shares of one of the leading crypcurrency exchanges is set to continue. The direct listing resulted in wild swings – between $310 to $429.54 for the "shovels and picks" firm. Bitcoin, the granddaddy of digital assets, is changing hands around $63,000, below the record highs but above the previous peak seen in March.

Update: Still awaiting the first trade in Coinbase (COIN) as the indicated opening price still goes up! The latest is for a $360 open making Coinbase (COIN) on target to be worth more than the Nasdaq, NYSE and EuroNext combined.