Update May 21: Churchill Capital Corp IV (NYSE: CCIV) briefly recaptured the $20 mark on Thursday, having posted over 4% gains, as the company provided visibility in public. The stock failed to resist above the latter, settling the day at $19.84. The two tweets posted by the company lifted the investors’ sentiment, as it highlighted the Lucid User Experience reveal on May 26. Meanwhile, a potential closing of the Special Purpose Acquisition Company (SPAC) merger with Lucid Motors also collaborated with the surge in the share price. The broader market recovery also aided the upside in CCIV. 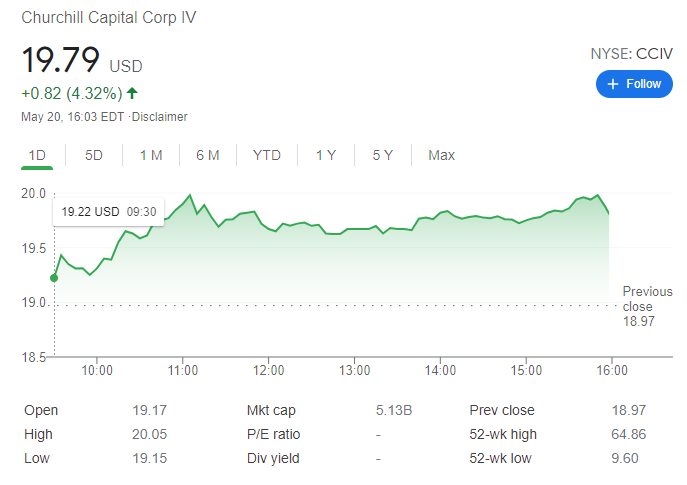 NYSE:CCIV investors have finally received some good news after going months without any updates from Lucid, as the company inches closer to merging with CCIV. On Friday, CCIV reversed its trend and gained 4.00% to close the trading day at $17.94. Shares are still trading below the 50-day and 200-day moving averages, but investors are relieved to see that the SPAC stock finally found support before it fell below its initial PIPE price of $15. With some recent announcements, CCIV may be looking to do a bullish reversal heading towards a Q3 merger date.

Lucid Motors CEO Peter Rawlinson fired back at former boss Elon Musk, who recently made some public jabs towards the former Tesla (NASDAQ:TSLA) employee. Musk said that Rawlinson was never a Chief Engineer at Tesla and downplayed his roles in the development of the Model S and Model X vehicles. Rawlinson responded by claiming he still had his business cards from Tesla, and that it would seem like a great deal of effort to have fraudulent cards made up if that was not his actual position. 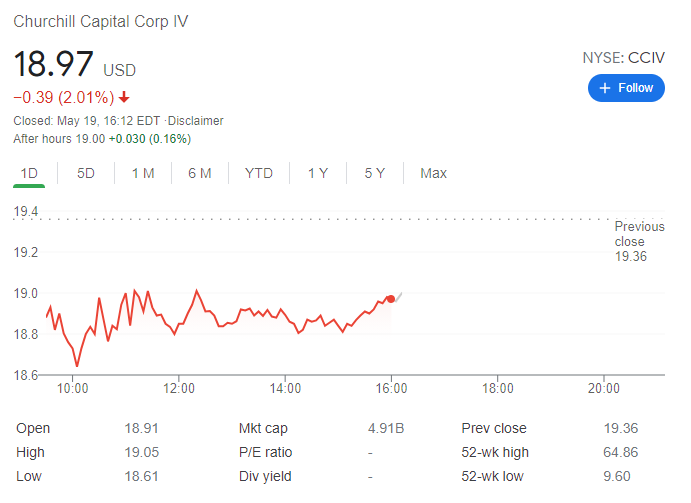 Lucid Motors is officially making its way into Canada, announcing that it is opening a showroom in the high end Pacific Centre Mall in Vancouver. Lucid is bringing with it some high-end technology as consumers will have a chance to engage in a virtual reality experience where they can see other Lucid models in action. Lucid will also have its vehicles on display at the upcoming Amelia Concours auto show in Florida.

Update May 20: Tech-related shares led to a recovery in Wall Street, as investors shrugged off the dismal mood triggered by the US Federal Reserve Minutes. Churchill Capital Corp IV (NYSE: CCIV) closed the day 4.32% higher at $19.79, after hitting an intraday high of $ 20.05. Stocks met demand on lower US government bond yields, which neared weekly lows on Thursday after peaking at critical levels the day before. CCIV got additional support from mounting expectations on what Lucid Motors will present on May 26.

Update: Will this upside swing be decisive? As investors await the closing of the Special Purpose Acquisition Company (SPAC) merger with Lucid Motors, shares of Churchill Capital Corp IV (NYSE: CCIV) are moving higher. The recent news has been positive for the firm, despite the broad drop in its value. At the time of writing, CCIV has recaptured the $19 level it is battling. To convince additional buyers to jump in, surpassing the psychological barrier of $20 is critical.

Update May 20: Churchill Capital Corp IV (NYSE:CCIV) corrected from one-week highs of $19.65 on Wednesday, settling the day back under $19. The stock fell about 2.5% after a blistering 6% rally seen a day before on news that the SPAC will be listed under a LCID ticker on Nasdaq. The pullback in the CCIV shares came amid a broad market sell-off after the FOMC minutes showed that taper talk could take the stage at ‘upcoming meetings’.  Any hints on the withdrawal of the monetary stimulus dents the appetite for risker assets. Meanwhile, the crypto crash also spooked investors and weighed on the demand for the meme stock.

Update May 20: Churchill Capital Corp IV (NYSE: CCIV)  has ended Wednesday's session at $18.97, just below the $19 level that has served as a magnet in recent price action. The see-saw is set to continue on Thursday with an increase of 0.98% to $19.14 in premarket trading. Lucid Motors, which Churchill is SPAC-merging with, is set to deliver its cars later in the year and has recently announced that Sherry House – previously from Alphabet – will take over as CFO.

Update: Churchill Capital Corp IV (NYSE: CCIV) has put an end to its winning streak, ending Wednesday 2.01% lower at $ 18.97. The modest pullback, however, is far from suggesting an interim top underway. In fact, the bullish potential remains intact, as the intraday decline could be attributed to the dominant sour market's mood, after the US Federal Reserve unveiled the Minutes of its latest meeting, indicating that some officials are willing to discussing tapering, although reaffirming their conservative stance. The share´s price topped at 19.05 and bottomed for the day at 18.61.

Update: Churchill Capital Corp IV (NYSE: CCIV) has been paring some of the gains made on Tuesday, and traded below $19 in early trading on Wednesday. Shares of the blank-check company that is SPAC-merging with Lucid Motors have been under broad pressure since the event was announced. While the news of the upcoming new ticker – LCID – have been cheered, uncertainty about the firm's prospects and broad markets selling is adding to the pressure. Critical support is at $17.25, and resistance is at $19.38.

Update May 19: After witnessing a stellar 6% rally on Tuesday, NYSE:CCIV eased half a percent in post-market trading, still finishing with sizeable gains above the $19 mark. The stock finally recaptured $19 to clinch weekly highs. CCIV shares rose for the fourth straight session on Tuesday, gaining additional impetus from the announcement that the SPAC will be listed under a LCID ticker on Nasdaq after its likely merger with Lucid Motors. Investors also looking forward to Lucid’s vehicles display at the upcoming Amelia Concours auto show in Florida.

Update: Churchill Capital Corp IV (NYSE:CCIV) has closed Tuesday at $19.38, adding 5.84% to its latest rally. Despite the sour tone of Wall Street, speculative interest continued to bet on a successful merge. Hopes surged after Lucid Motors made some interesting tweets, first reporting that $LCID coming to Nasdaq following the planned merger with CCIV. Although there was no specific date for the merge, the tweet confirmed progress toward it. Also, the company anticipated it will appear at the Amelia Island Concours d'Elegance this week, which is among the top automotive events in the world.

Update: Churchill Capital Corp IV (NYSE:CCIV) has been experiencing the third day of recovery, moving up toward $19 on Tuesday. Shares of the company that is set to SPAC-merge with Lucid Motors hit a low point of $17.25 on Thursday but has been recovering since then. Some resistance is at $19.28, which was capped an attempt to recover on May 7. Broader stock markets are looking for a new direction.

Update May 18: CCIV shares continued to rally on Monday, bouncing from a strong support zone around $17.62. The shares ended at $18.31, up 2%. Lucid Motors CEO Peter Rawlinson had a fitting reply to former boss Elon Musk, who made a dig at him at a public forum and questioned his role in Tesla. The stock hit a daily high of $18.70 before retracing to settle the day slightly lower.