Update June 3: CCIV shares slide back nearly 3% in early trading on Thursday after registering some nice gains in the last number of sessions. The shares are trading at $22.91 at the time of writing for a loss of nearly 3%. The market as a whole is struggling for momentum and retail names, in particular, are suffering as AMC slides.

NYSE:CCIV remains one of the most discussed stock tickers on FinTwit and Reddit, as many investors imagine the SPAC IPO as the chance to get in on the next Tesla (NASDAQ:TSLA) on the ground floor. Shares of CCIV have remained in a long consolidation period following the February surge to it's all time high price of $64.86. With a series of positive announcements and  a full unveiling of its technological capabilities last week, many investors are gearing up to see CCIV trend higher ahead of its rumored merger date.

Lucid Motors may also benefit from recent proposals to the U.S. Senate Finance Committee, which would see an increase in tax credits for consumers who purchase electric vehicles manufactured by union workers in America. The proposal would see the price of the vehicles capped at $80,000 which would be subsidized by a $12,500 tax credit. The base model of the Lucid Air starts at $77,400 but that would be the only model of Lucid’s vehicles that would fall under the $80,000 threshold. 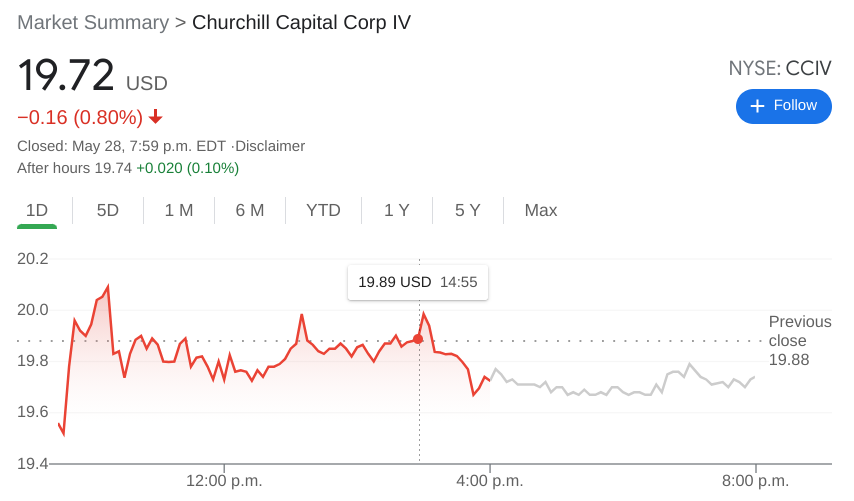 Rumors were swirling over the weekend that CCIV and Lucid Motors would be pushing the merger date up to the end of the second quarter. This would require a shareholder vote to take place in the near future, which may be enough of a catalyst to send the stock back into orbit. Despite all of the excitement, Lucid is still only expected to deliver about 500 total vehicles in 2021, so it has a long way to go before it can be considered a true rival to Tesla.

GBP/USD picks up bids to extend the previous day’s recovery to 1.2100 during Wednesday’s Asian session. In doing so, the Cable pair approaches a one-week-old resistance line while also portraying the third bounce off the 50% Fibonacci retracement level of July-August advances.