Update May 6: CCIV shares have again opened negatively on Thursday, losing 1% in early trading. CCIV shares are currently at $19.02 having broken the key $20 level earlier. The next target, support is at $17.62. Elon Musk had earlier this week tweeted about Lucid CEO Peter Rawlinson downplaying his role at Tesla (TSLA).

NYSE:CCIV has remained one of the higher price SPAC stocks on the market, as anticipation still lingers for its impending merger with Lucid Motors. To close out the week on Friday, CCIV fell another 4.4% to close the trading day at $21.09. Shares of CCIV started the week off with a bang when rumors began to swirl about a possible connection between Lucid Motors and tech giant Apple (NASDAQ:AAPL), who has been managing expectations of its own electric vehicle plans, nicknamed Project Titan. A merger date between Lucid and CCIV still has not been established although many suspect that it will be announced at some point in the second quarter of 2021.

The SPAC craze that has taken over Wall Street over the past year may be nearing its end as the SEC mulls over instituting stricter regulations over the shell companies. It started when the SEC suggested that SPAC-issued warrants should be counted as liabilities rather than equity and continued when the agency proposed that SPACs should undergo similar regulation as companies that IPO. The fear is that inflated future growth numbers are not monitored as closely with SPACs, which puts retail investors at risk of being misled. 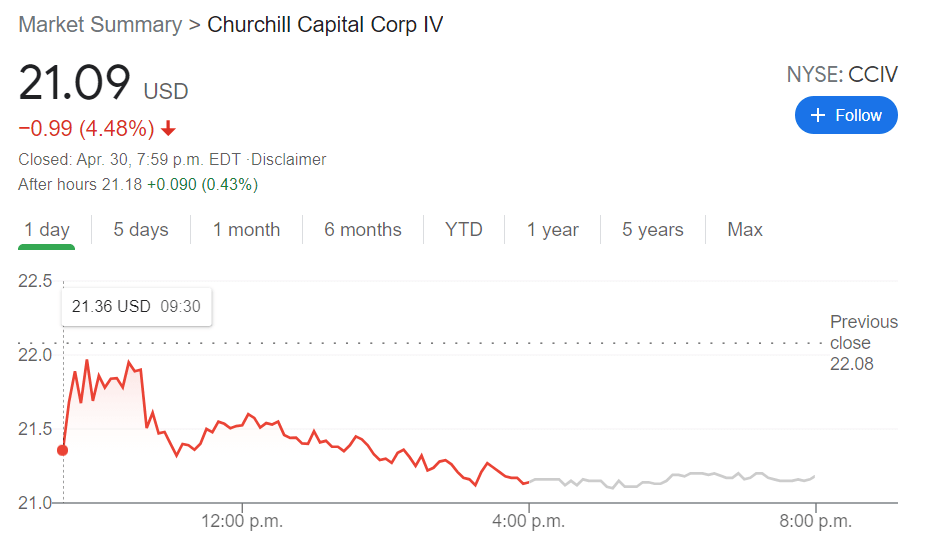 On the automotive front, Lucid has reportedly announced that its $70,000 Air Pure sedan will be available for consumers to purchase by 2023. The initial run of its $169,000 Lucid Air Dream edition has already sold out, according to the company, a sign that the demand for luxury electric vehicles is still high.

Update May 5: Churchill Capital Corp IV (NYSE: CCIV) has been rebounding on Wednesday, gaining some 2%. However, it had already hit the $20 mark before heading down. This rejection at a psychologically significant level is a bearish sign. Broader markets are trending higher after falling on Tuesday due to worries about rate hikes. US data such as the ISM Services Purchasing Managers' Index has missed estimates.

Update May 4: May the Fourth be with investors in Churchill Capital Corp IV (NYSE: CCIV), who have to cope with a closing price of $19.91, below the psychological barrier of $20. Shares of the company, which is about to merge with Lucid Motors, had already dipped below that level in mid-April, closing at $18.45 – which now serves as critical support. Below that point, $19.54 works as support. While after-hours prices are pointing to a small bounce to $19.95, it is essential to note that markets are in a somewhat gloomy mood early on Tuesday.

Update May 5: Churchill Capital Corp IV (NYSE: CCIV) has extended its falls on Tuesday, tumbling to $19.17, a drop of 3.72%. That is the fourth consecutive day of drops for the company that should have bright prospects after its SPAC merger with Lucid Motors. The world is shifting toward electric vehicles. On the other hand, reports that China is making an effort to ramp up the production of EVs may pose significant competition to the Arizona-based maker of luxury cars. Critical support awaits at $18.45, which iwas the closing level on April 20 and the lowest in many months. Staying above that point would hint that bargain-seekers are ready to show up for Churchill.