NYSE:BE rallied on Wednesday as the stock was able to shake off an analyst downgrade from Morgan Stanley given the day before. Shares jumped by 8.55% during the trading session and screamed to a new 52-week high price of $38.95 before settling back down to close the day at $38.71. The new high price represents a near 1200% gain over the past year as the stock has a low price during that same time period of only $3.00 per share.

Morgan Stanley was certainly one Wall Street firm not buying into Bloom’s stock price continuing to skyrocket. The investing behemoth cited that while Bloom’s performance and growth as a company have been impressive, the stock has already run too high too fast. Morgan Stanley downgraded its status to 'equal weight' and a price target of $34.00, which represents a 12% downside to the stock’s price from Wednesday. Bloom investors seemed unaffected by the downgrade as was seen by its performance on the day after the report was made public. 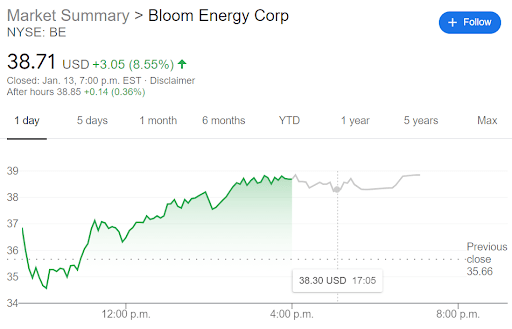 Bloom also saw one of its bigger rivals in Plug Power (NASDAQ:PLUG) striking a new deal with European automaker Renault to put Plug’s fuel cells into their new commercial vans. PLUG responded by also powering to a new all-time high hitting $73.90 on Wednesday, which is an incredible 3600% increase over the past 52-weeks. Investors who got in early with both Plug and Bloom are certainly reaping the rewards in 2021.