NASDAQ:AZN has now strung together consecutive days of gains as the stock trajectory continues to point upwards for the United Kingdom-based pharmaceutical giant. On Tuesday, AstraZeneca gained 2.40% to close the first trading session of the week at $52.57. While AstraZeneca has lagged behind its American rivals Pfizer (NYSE:PFE) and Moderna (NASDAQ:MRNA) in terms of widespread usage and distribution of its COVID-19 vaccine candidate, the old adage ‘it’s better late than never’ may be what its investors are currently thinking.

AstraZeneca received a further nod of approval from Europe when several countries including Austria, Greece and Denmark have urged the European Medicines Agency to fast track approvals for its vaccine. Austria, in particular, is battling rising cases of the virus, and have officially extended its lockdown to February 7th. The EMA did agree to review the AstraZeneca vaccine data on an expedited basis this month, so these countries should have their answer by the end of January. 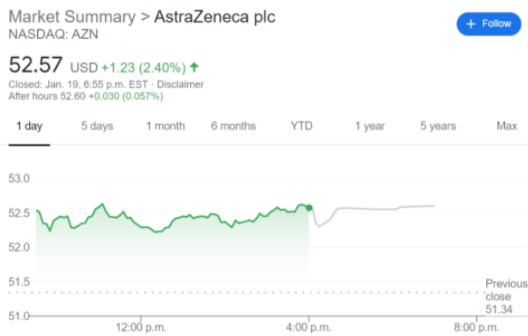 In other news, AstraZeneca has received approvals for its gastric-cancer treatment Enhertu, which it has developed in partnership with Japanese pharmaceutical firm Daiichi Sankyo, after its Phase II results were extremely positive. Enhertu represents the first new treatment for metastatic HER-2 gastric cancer in over a decade. AstraZeneca also received approval to release a new dosage for its non-small cell lung cancer treatment, Imfinzi, which will drastically cut back on patient medical visits, which is especially crucial during the COVID-19 pandemic. The new regiment will see Imfinzi provided to patients in a four-week dosage interval, which represents about half of the visits patients need to make on the current schedule.