NYSE:AT has reached the end of the line in terms of being a publicly-traded company, and the struggling utilities firm that services the United States and Canada gave its shareholders one last surge. On Friday, before the statutory MLK Day holiday in America, Atlantic Power Corp skyrocketed by 39.05% to close the trading session at $2.92, just short of its 52-week high price of $3.00. The Massachusetts-based company has performed decently, especially considering how much utilities firms have suffered during the COVID-19 pandemic, and has returned 21.67% to investors over the past 52-weeks which has outperformed the benchmark S&P 500 index.

The agreement between Atlantic Power Corp and I Squared Capital is for a value of $961 million and will be a cash-only deal that will net shareholders a sum of $3.03 per share. The valuation represents a nice profit for shareholders as the stock has a 50-day moving average of $2.08 and a 200-day moving average of $2.04, so recent months have seen Atlantic Power Corp in a stagnant price range. 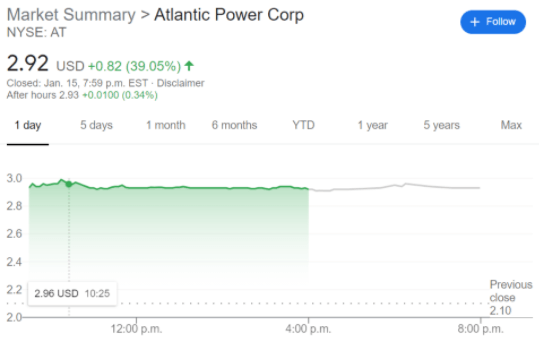 I Squared Capital is a private equity firm based out of Miami, Florida that specializes in global infrastructure investments, specifically in the fields of energy, utilities, transport, and telecom. The deal to acquire Atlantic Power Corporation comes on the heels of I Squared Capital’s recent acquisition of GTT Communications, an American based telecom company based out of Virginia.