In less than 12 months the Apple share price has more than doubled, from the lows of $54 to closing at $143 last night, with expectations high for another blow out opening quarter.

It’s also a big week for tech earnings more broadly, and having seen Microsoft set the bar very high last night, expectations are rising that Apple will follow in Microsoft’s footsteps and blow the doors off when they report later today.

Despite the challenges posed by the pandemic the company has seen little in the way of impact on its quarterly numbers, and its ability to generate cashflow at an increasingly accelerated rate.

That’s not to say the year has been without its challenges with disrupted supply chains delaying the launch of new products, resulting in a fragmented rollout, which resulted in a separate and delayed event for the new iPhone 12 5G model. 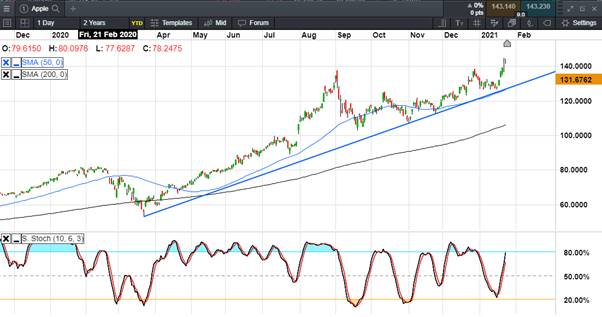 Apple’s first quarter is one of its most important ones and traditionally tends to be its best quarter when it comes to sales and revenues, especially given it includes the period covering Thanksgiving and Christmas, and coincides with the launch of new upgrades for its product suite.

In September we got announcements of new upgrades with a new iPad, and Apple One subscription bundle in what looks like an attempt to take on Amazon Prime, and a new Apple Watch 6 with a fitness bundle.

The fitness bundle looks like an attempt by Apple to tap into the lucrative online fitness market, taking on Peloton, with a Fitness Plus option which connects to the Apple Watch and tailors’ online workouts where you can do virtual workouts online.

The new iPhone 12 which was announced in October was rather underwhelming, though we did finally get the long awaited 5G model, and it is here which could well determine whether Apple meets market expectations for Q1 revenues and profits, with the iPhone accounting for over 40% of all of its revenue in its last quarter.

Last year the company posted record revenue and income for Q1 at $91.8bn and $22.2bn respectively, with the iPhone responsible for 60.9% of that, and expectations are for a similarly record quarter this time around with revenues expected to be in excess of $100bn.

This would be an extraordinary achievement, particularly given the challenges facing consumer demand over the past 12 months, and it is true that iPhone demand has been subdued in the last 12 months in anticipation of the new iPhone 12.

Whether this is enough to drive the revenue numbers above $100bn remains to be seen, but it does seem a bit of a stretch, when consumers globally have held back on spending and retail sales in China are still well below the levels last seen at the end of 2019.

In the twelve months since its last record quarter the amount that services have contributed from the revenue stream has grown from 13.85% to 22.5%, as the company gets a greater uptake from the likes of its streaming services, Apple TV+, Music, as well as its iTunes store.

The increase in services revenue is certainly a welcome development, however it doesn’t change the fact that Apple is still at heart a hardware provider, and while Apple TV+ is expected to see some gains against the likes of Netflix, Amazon Prime and Disney+, it is its hardware sales that drive the company forward, and it will be here that determines whether we see a move above $100bn.

Even if we don’t, the market is still banking on a record quarter for Apple, and with the shares already at a record high, valuing the company at $2.4trn it would take quite a miss to undermine sentiment around a company that continues to generate cash at record rates.

It is this ability to generate cash that could be its Achilles heel in the months to come as the new US administration starts to look at the tech sector in the context of how much tax they pay relative to their profits. This could prompt talk of windfall taxes or tougher regulation over the next 12 months.

Spread bets and CFDs are complex instruments and come with a high risk of losing money rapidly due to leverage. 70.5% of retail investor accounts lose money when spread betting and/or trading CFDs with this provider. You should consider whether you understand how spread bets and CFDs work and whether you can afford to take the high risk of losing your money.