Update: Apple stock continues to fall on Wednesday after posting a strong set of results. It may be time for us to give up the day job here at FXStreet as we ahve been calling this one so well lately! EPS and revenue were well ahead of estiamtes, just like the priour release in april. But in a deja vu move Apple shares have retreated despite the strong results. Our three resons below oputline why. At the time of writing Apple stock is trading at $142.90 for a loss of 2.6% on Wednesday.

Apple released Q3 2021 results just after the close on Tuesday, July 27. Earnings Per Share (EPS) were $1.30 versus the $1.00 Wall Street estimate. Revenue was $81.4 billion versus the $72.93 billion estimate. Apple reported Q3 iPhone revenue of $39.57 billion up from $26.42 billion a year earlier. Apple stock (AAPL) had a little pop just on the release of the numbers but this swiftly turned around and the stock fell about 1%. At the time of writing, in Wednesday's premarket, Apple stock is trading at $144.8 for a loss of 1.3%.

The numbers were good, very good. Any time you beat earnings estimates by 30% is a good day but are these estimates too low and conservative? Companies are smashing earnings out of the park. In the last quarter, about 80% of S&P 500 companies beat earnings expectations. So these may be analyst's expectations, but are they traders/investors expectations? If results consistently beat, then traders and investors will come to expect a beat every time. Merely in line results no longer cut it, companies have to smash earnings. Apple reported Q2 results in late April 40% ahead of numbers and the stock fell. Microsoft (MSFT) reported earnings way ahead on Tuesday after the close and the stock dropped (since recovered).

Three reasons why we think this time may be the same as last time for Apple stock and it falls after beating estimates.

1. Apple failed to break the psychological $150 resistance and the Moving Average Convergence Divergence (MACD) has crossed into a bearish signal.

2. Apple beat earnings well but it has done this before and the stock has fallen. The premarket move gives us some clue that all is not well with bulls.

3. On the conference call Apple mentioned supply constraints for the iPhone and iPad in Q4 and also guides for that quarter growth to be lower.

The first short-term support is the 9-day moving average at 146.59, this has been broken in the premarket. Next is the old all-time high at $145.09 but this is not that strong. The $135-to-$137 area is our first support zone, as we can see the volume profile picks up here. Below that, Apple is likely to find support in the mid $120s as this is the area with the highest volume and the 200-day moving average supports the price further here. 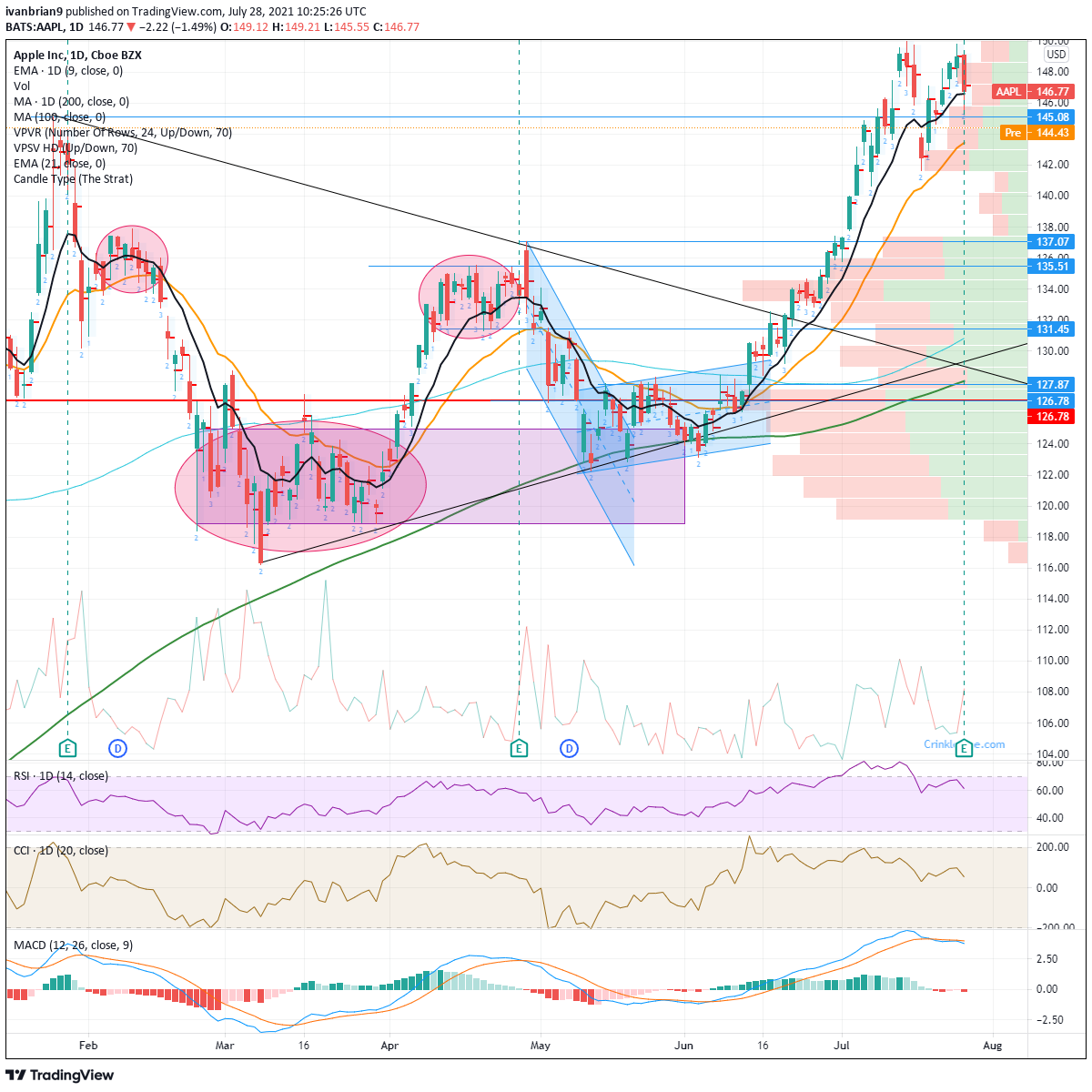