The American Express Q2 earnings report is due on July 23, 2021. Considering the Q1 report, this guide will forecast the company’s next-quarter earnings report.

American Express’s most recent quarterly earnings report was announced on April 22, 2021. The payment services firm reported $2.74 EPS for the quarter, $1.13 higher than the average estimate of $1.61. During the quarter, the company earned $9.06 billion, compared to the consensus estimate of $9.19 billion. On a year-over-year basis, revenue was down 12.1 percent. Over the last year, American Express earned $5.34 per share and has a price-to-earnings ratio of 27.9.

Investors learned from American Express’s first-quarter reports that 2021 will be a crucial year for the corporation, as it was one of the many card firms to have been affected in the last year because consumers spent less on travel and entertainment during the pandemic lockdown.

American Express has been struggling for two main reasons. One, as both a bank and a credit card processor, American Express was harmed by the need to set aside billions of dollars for future credit losses.

Two, a significant portion of its revenue is derived from travel and entertainment expenses, both of which were almost eliminated last year. The CEO of the corporation referred to 2021 as a “transition year.”

American Express reported first-quarter revenue of $9.1 billion, a 12% decrease from the previous quarter and well shy of the $9.2 billion expected. On the other hand, profits exceeded forecasts, with American Express earning $2.74 per share, which was higher than both the $0.41 achieved in the first three months of 2020 and the $1.75 projected by analysts. After experiencing low overall consumer spending in 2020, the year 2021 signals a transition period for the corporation.

Overall spending on American Express has remained stable over the last three quarters, a trend that is likely to continue in the upcoming quarter as limits were lifted and customer confidence was boosted.

Estimated revenue for Q2 is $1.60 per share and $9.48 billion, representing increases of 451.72 percent and 23.52 percent, respectively, over the corresponding year-earlier reported amounts.

The value of the stock dipped significantly last year, which made American Express a great support for traders, as the negative results were temporary, brought on by issues related to the pandemic and recession.

This year, however, American Express (NYSE: AXP) has had a fantastic year thus far, with its stock price surging 37% year to date following a difficult 2020.

The American Express company stock price fell significantly in the last week only to recover most of its losses, and closed yesterday (July 21) at $172.56, down from last week’s highs at $174.70 but significantly above Wednesday’s (July 20) low at $160.00. 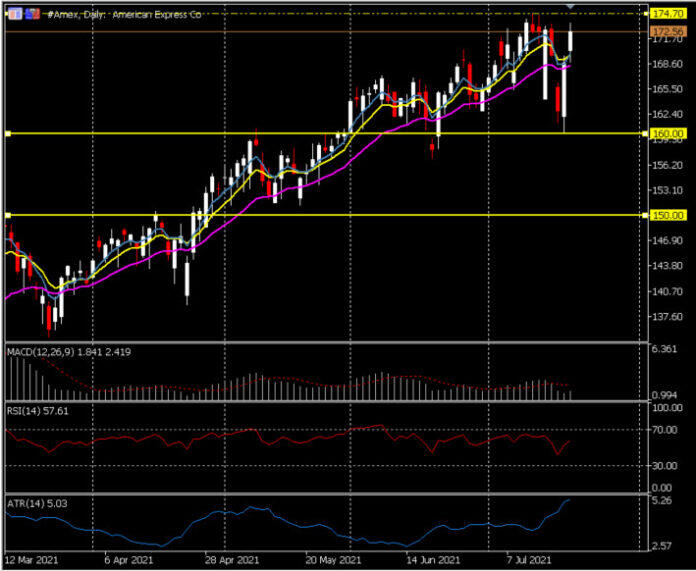 The price has risen in six of the last ten days and is up by 1.84% over the past two weeks. Volume has increased but on falling prices. This may be an early warning, and the risk could be increased slightly over the next couple of weeks. 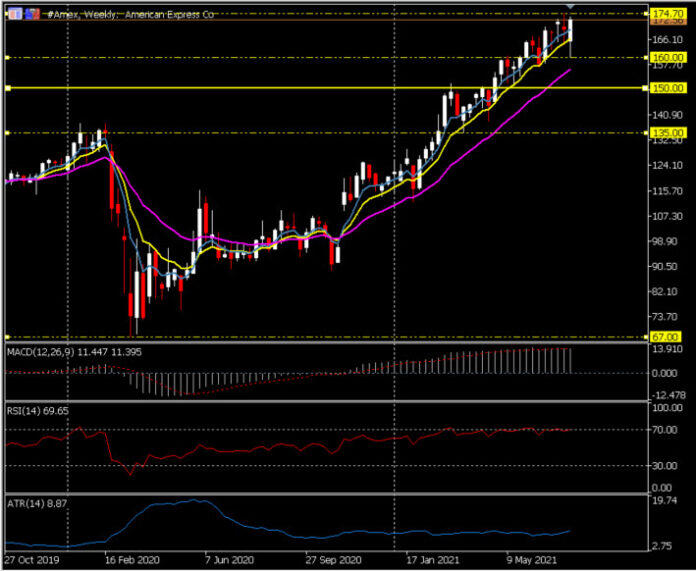 The stock lies with the strong uptrend on the monthly chart with the RSI and the 21-day moving average showing upward momentum.

On the other hand, there could be some further downturns to the support level of $150.00.

GBP/USD is trading around 1.3750, extending its rebound from five-month lows. Sterling has shrugged off a growing EU-UK row over the Northern Irish protocol and persistently high covid figures in the UK. The BOE's Broadbent sees no rush to respond to inflation.

Why is Tesla stock moving

Tesla underperformed the broad market on Wednesday closing just under 1% lower at $655.29. Equity markets have been recovering from the hammering they took on Monday but Tesla did not get the memo and remained in a bearish mood.