Update: AMC Entertainment added a whopping 15.02% to end the day at $18.26 per share, not far from its daily high of $18.91. Wall Street trimmed Monday's losses and posted substantial gains on Tuesday. The best performer was the Nasdaq Composite, up roughly 2%, followed by the S&P 500 adding 1.33%. The Dow Jones Industrial Average added 254 points, to end the day at 34,807. US indexes followed the lead of their European counterparts, which managed to reverse early losses and settle in the green despite the absence of good news.

Market players finished digesting US Federal Reserve Powell & co aggressive stance on monetary policy, with a 50 bps rate hike for May already priced in.  Meanwhile, US government bond yields soared, with the 10-year U.S. Treasury yielding as much as 2.392%, its highest level since May 2019. The yield on the 2-year Treasury note peaked at 2.20%.

Meanwhile, speculative interest put aside concerns related to a possible new wave of coronavirus hitting Europe, and the Ukraine-Russia crisis. Moscow has continued attacking its neighbour country and a diplomatic solution seems out of the table for now. 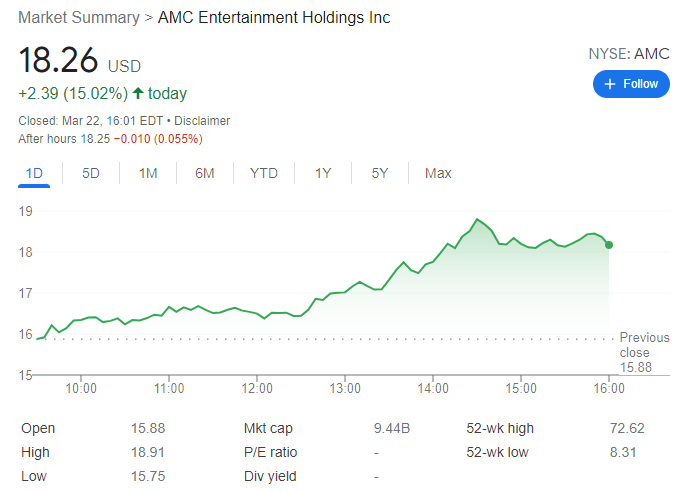 Previous update: AMC stock has advanced more than 3% on Tuesday morning after an uncertain opening. Shares of the much-watched cinema chain opened flat, but one hour into the session AMC is changing hands at $16.37 for a gain of 3.2%. This is much better than the Nasdaq, which is also up 1.4%. The latter index is advancing well ahead of either the S&P 500 or the Dow, which shows that the market has chosen a risk-on mood for the day. When the market is in a more risky mood, speculative stocks like AMC tend to do better. This optimism is somewhat surprising as the Federal Reserve's James Bullard called for a 0.5% hike at the central bank's next meeting in May, and Goldman Sachs predicts the next two meetings will both feature a half percentage point rise. It seems a steeper interest rate hiking scenario is already priced into the market.  AMC's investment in Hycroft Mining (HYMC) is fairing worse however. Shares of the gold minder are down 7.3% to $1.15.

AMC stock failed to make any headway on Monday as it appeared some of the recent upticks in meme stocks ran out of steam. This is not too surprising when we take into account some surprisingly hawkish commentary from Fed chief Powell on Monday, who put extra rate rises back on the table and the possibility of a 50 basis point hike also in play. This led to a swift dump in bonds, which as a result saw bond yields rise (bond prices and yields move opposite one another).

The US 10-year yield is headed straight for 2.5%, and the 2-year yield is currently at 2.18%. As a general rule of thumb, higher interest rates hit growth stocks disproportionally. This has to due with discounting future cash flows using a higher discount rate (interest rate), and also many growth stocks carry a lot of debt to fund growth. Funding debt is harder with rising interest rates. In fairness to AMC, it recently did restructure some of its debt, but it still will face challenges from higher rates and higher funding. AMC Entertainment tried to raise cash from shareholders last year, but this was met with resistance.

Many have touted the investment in gold miner Hycroft Mining (HYMC) as a smart diversification strategy into gold. Indeed, gold prices are rising this year and are predicted to rise further with soaring inflation and geopolitical tensions. Hycroft Mining is not a gold vault though. It has one gold mine in Nevada, which is not profitable.

We are unsure if the quality of gold is high from this mine, but judging by the costs involved from Hycroft's last few years' income statements, it is an expensive operation. Finding gold is all well and good, but getting it out of the ground is the more important part. Hycroft Mining has not turned a profit in several years. The company last November had to lay off huge amounts of staff and said it needed to raise cash to keep going. AMC has bought some decent publicity for itself and appealed to its retail shareholder base, but how long can it keep doing that? The AMC apes will eventually wise up to this show. The last financial statements show AMC has a large pile of cash, over $1 billion but an even larger pile of debt, over $5 billion. Total liabilities totaled nearly $13 billion.

We maintain our $8.95 target and see AMC stock struggling for gains once the latest growth rally peters out. 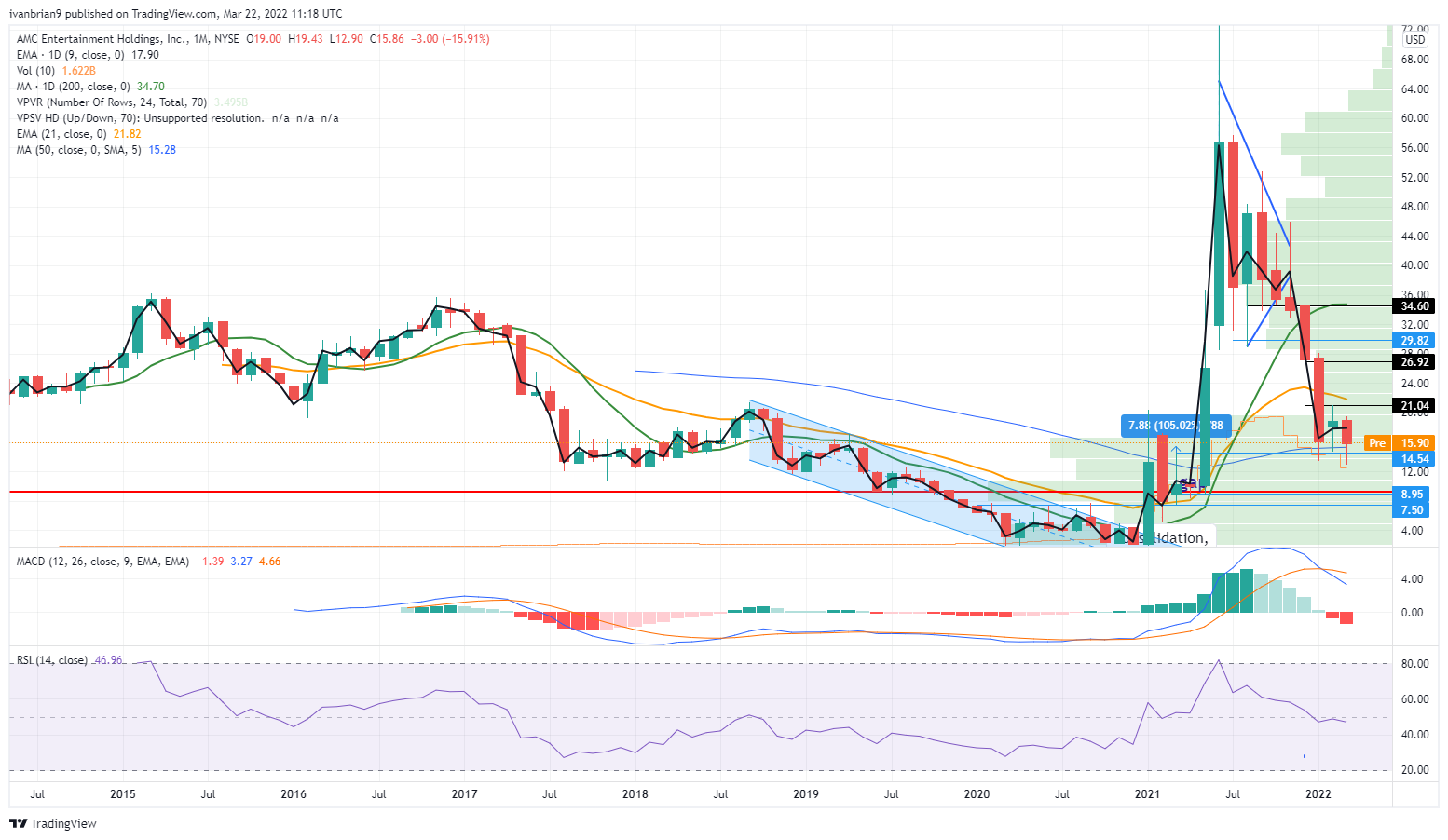 We put up the monthly chart above to show where AMC stock has come from. Trading sub-$10 does not look that much of a stretch given past AMC stock price action.

AMC remains in a strong downtrend with classic lower highs and lower lows. The most recent is at $13, though a break will confirm more losses to come. Only getting above $21.04 turns the trend around, and this is a long way off. 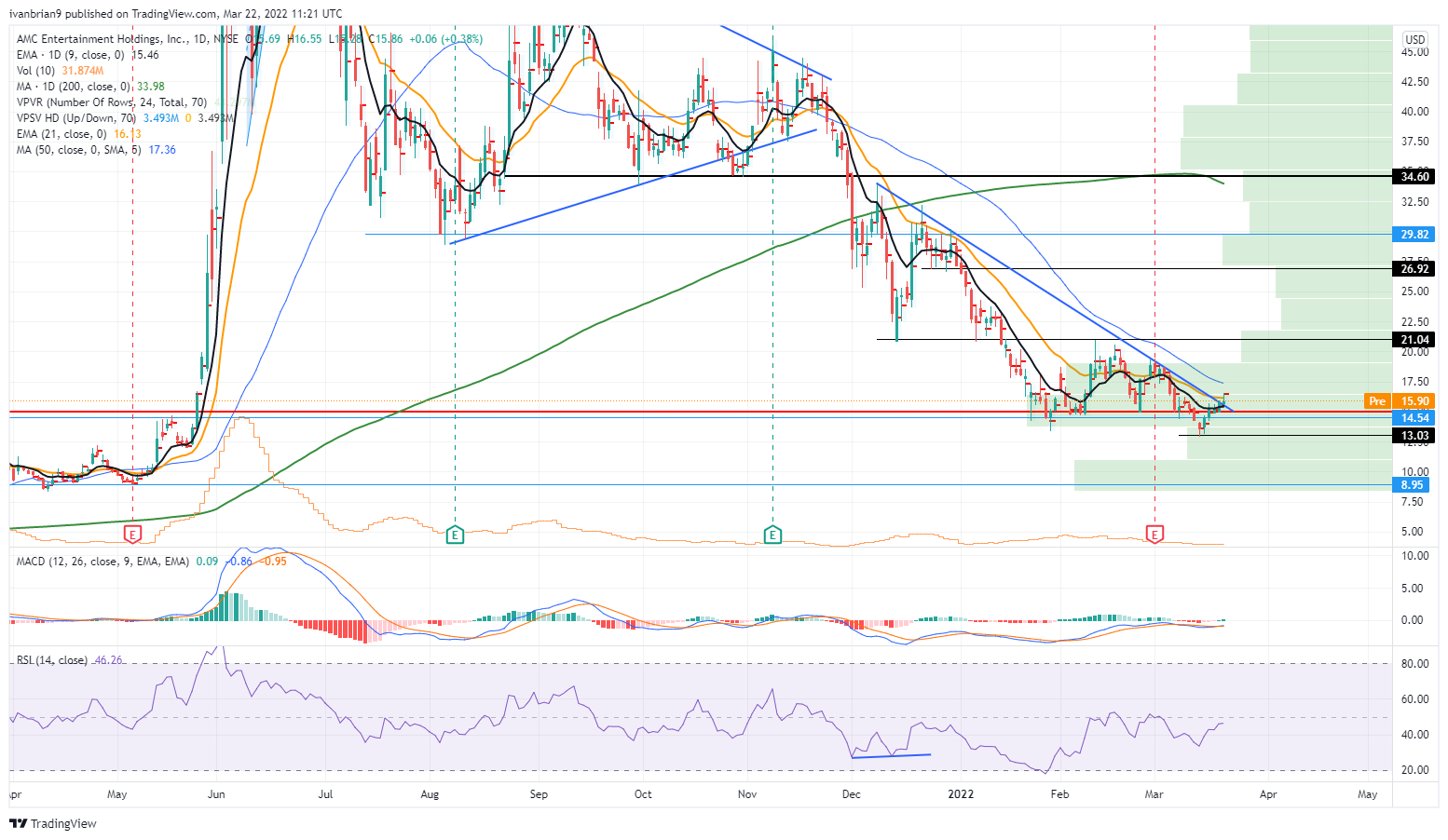 The author is long puts in HYMC.

Prior Update: AMC stock has opened on Tuesday although you may struggle to think so as both volumes and price-performance are pretty low in early trading. Officially, at least, AMC stock is starting to make ground. It opened pretty much flat on the day but in the last few minutes, AMC has added 2% and is at the time of writing trading at $16.20 up 1.7%. AMC is hanging on to recent gains that have seen it rise over 15% in the last week. Mostly this was on the back of its notorious investment in Hycroft Mining (HYMC). But we should point out HYMC stock continues to fall and it is currently down 6% on Tuesday at $1.17. Shares in HYMC had spiked as high as $2.97 last week on news of the AMC investment. AMC Entertainment mentions on social media are also falling this week indicative of slowing momentum across many growth and meme stocks.

Economic catastrophe likely for US and Europe?

Clifford Bennett joined ausbiz TV to discuss the current state of currencies and what the forecasts are telling us. Clifford states that ‘it has been very easy to this point but we need to get back on our toes’ as we approach volatile levels in currencies.