There are few companies who have been hit as hard as NYSE:AMC during the COVID-19 pandemic, and as the world slowly tries to get back to normalcy, it seems as though cinemas are being left behind. After surging of late, AMC dropped by 2.94% on Wednesday as shares fell to $2.97, despite the S&P 500 surging to new all-time highs amidst President-elect Biden’s inauguration. The stock has been the target of day traders recently attempting to capitalize on some good news from the beaten-down movie theater brand. Wednesday’s daily trading volume neared 180 million shares, which is far greater than its usual average daily volume of 33 million shares. AMC has returned a loss of 56% over the past 52-weeks to its very patient shareholders.

AMC did get a boost on Tuesday as it announced a $100 million debt offering that would prolong its survival for the time being. Even as doors have re-opened in limited fashion, customers have been very reluctant to return to movie theaters as a form of entertainment. It does not help things that companies such as Disney (NYSE:DIS) have been releasing new movies directly to its streaming services, rather than bothering with releasing them in theaters. 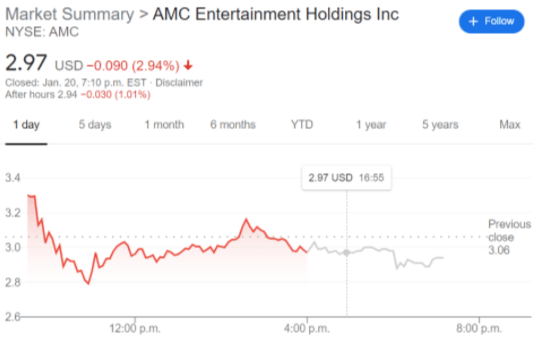 AMC has reiterated that despite the debt offering, there is still a very real chance of bankruptcy if the COVID-19 pandemic continues to affect its business. One of AMC’s biggest rivals Regal Cinemas recently announced it is hoping to re-open some of its theaters by Easter but even that is not a guarantee. The future of cinemas is very much in flux right now, especially if AMC were to continue to fall towards bankruptcy.