Update May 11: AMC shares bucked the trend on Monday rising nearly 3% and putting $10 firmly in their sights. The Nasdaq and most other retail interest stocks dumped but AMC bucked the trend. It was one of the few stocks in the green on Monday. Traders had been impressed with the conference call comments after releaseing results for Q1.

Update May 10: AMC Entertainment Holdings (NYSE: AMC) has kicked off the trading week with an upwards swing towards the $10 mark. The move could be attributed to Adma Aron, who praised Reddit investors who have been supporting the company throughout the period. While the company has significant debts – causing concerns in Wall Street – retail buyers remain content with the firm's prospects and those of America's reopening. The next level to watch is the late April peak of $11.50.

NYSE:AMC has ridden the wave of Reddit investors for months, but after another ominous earnings call, investors may be getting tired of this rerun. Friday came with some optimism though as shares gained 5.67% to close the week at $9.51. The stock is now trading below its 50-day moving average, and has suffered a drastic drop in daily average trading volume as the Reddit phenomenon slowly begins to fade away.

AMC saw its stock rise on Friday after an optimistic earnings call from its CEO Adam Aron on Thursday after the closing bell. AMC reported massive losses and an 84% year-over-year decline in revenues, and yet investors bought into the positive guidance that Aron provided for the rest of 2021. Aron said that over 7 million moviegoers came by an AMC theater in the first quarter, and that with the rising rates of COVID-19 vaccinations in the United States, he is hopeful of a full recovery for AMC. Another positive that Aron revealed is that due to other theater closures during the pandemic, AMC now owns a near 25% market share of all movie theaters in the U.S. 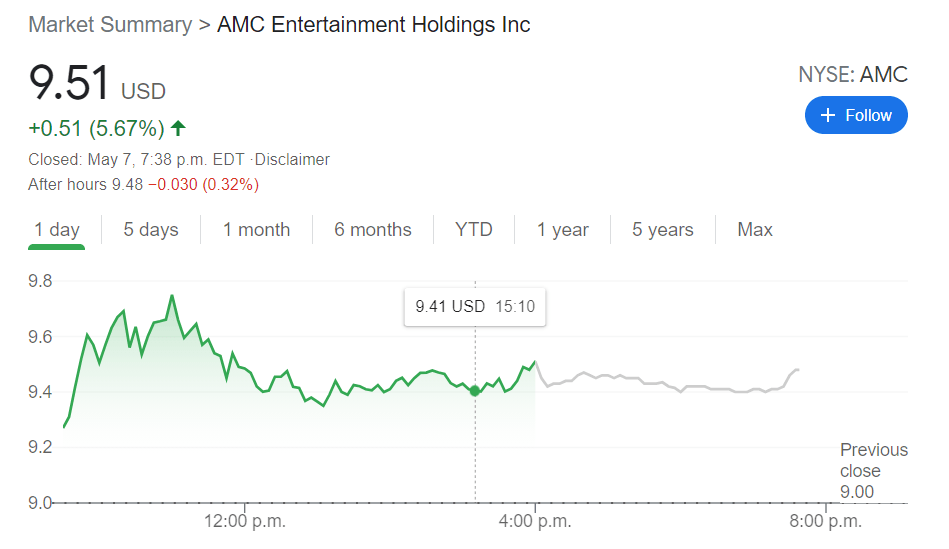 AMC joins the meme stock leader GameStop (NYSE:GME) as the focal point of new regulations being proposed by the newly sworn in new Chair of the SEC. It seems that the Reddit short squeeze event and subsequent debacle with the Robinhood trading platform have left a bad taste in the SEC’s mouth, and it is determined to not let an event of this magnitude take place again.