Update May 11: AMC shares bucked the trend on Monday rising nearly 3% and putting $10 firmly in their sights. The Nasdaq and most other retail interest stocks dumped, but AMC bucked the trend. It was one of the few stocks in the green on Monday. Traders had been impressed with the conference call comments after releasing results for Q1. AMC closed above the short-term 9-day moving average resistance.

Update May 10: Undeterred – retail investors organizing on Reddit have no time for Wall Street's gloom on NYSE: AMC. Despite debt fears and also a disappointing US jobs report, shares of AMC Entertainment Holdings are on the rise on Monday. CEO Adam Aron praised supportive Reddit fans and shared an optimistic vision for the future. That is helping AMC move higher on Monday. Can the stock continue its upswing? The market mood is somewhat less cheerful than last week.

AMC shares staged a strong rally on Friday as the market decided that the terrible jobs report was actually a good thing, go figure. Maybe AMC investors figured that people without jobs will have more time to go to the cinema? Either way, the price is always right and it went up nearly 6% in a strong rally.

AMC released results after the close on Thursday and as predicted they were not good. Actually, they were worse than predicted as both earnings per share (EPS) and revenue came in worse than analysts had feared.

EPS was $-1.42 versus a forecast of $-1.26. Revenue was $147.4 million versus a $153.6 million forecast. So a surprise, but not really a surprise, given the background that we are all too familiar with. AMC shares rallied during the premarket on Friday as meme traders focused on the bullish comments from CEO Adam Aron. Well, if the CEO isn’t bullish then who can be? Conference calls post-earnings releases always tend to err on the side of bullishness. The CEO said AMC was in a good place after 7 million moviegoers attended AMC theaters in Q1 2021. This was taken as a positive. But if 7 million people went to an AMC theater in the first quarter and the company still posted results like that, I do not think I would be quite so bullish.

In case you are not familiar with AMC, here is a quick rehash of the story so far. You could make a movie out of this one. Oh wait, they are! Well, GameStop is the leading star, AMC is the best supporting cast.

AMC is a global cinema chain and, as a result, has struggled during the global pandemic as most of these cinemas have been closed for the better part of a year. The company narrowly avoided bankruptcy through the interest of retail traders. By strongly backing it, these retail traders allowed AMC to raise capital and debt, meaning it could survive the pandemic. AMC and GameStop were two of the meme stock favourites at the height of the retail trading boom. Volumes on retail trading sites are lessening as the US opens back up, reducing the captive trading audience.

AMC still has serious problems, which make a long-term investment in the stock questionable. The company just has way too much debt and is facing headwinds from streaming players releasing online and in cinemas simultaneously. Disney has recently made such announcements. Yes, there is definitely pent-up demand, which will come out over the summer as economies reopen, but AMC needs to repay this massive debt pile, and it needs more than a short-term kick to do so.

AMC needs to earn a lot to stay in business. It nearly went bankrupt during the pandemic, which the CEO has alluded to, but the cash-raising helped to fend it off. But that does not mean the problem has gone away. During the financial crisis in 2008, heavily-indebted companies were the first ones to go bankrupt. AMC as mentioned has a huge debt pile. What happens when rates go up? This is going to happen very soon or not so soon depending on your view, but the debt pile will likely not be repaid before rates do rise.

Ok, so the fundamentals are challenging to say the least. A huge debt pile that is rate sensitive needs some serious cash servicing. AMC is going to have a hard job managing that. Technically, the chart is telling us that, in the short term, things may be looking up for AMC. Prior to Friday, it was all bleak as AMC tested the lower horizontal support line and the bottom of the triangle formation. As shown, a triangle breakout gives a price target of the size of the entry and formation of the triangle. In AMC’s case, this is $7.88. This gives an upside target of near $20 and a downside target of near $1. It depends on when and where AMC breaks out of the triangle.

For now, things are looking a bit more bullish. AMC rallied nearly 6% on Friday. In the process, the shares staged a strong bounce from the lower end of the triangle and horizontal support at $8.95. AMC traded up and tested the 9 and 21-day moving average resistances before closing lower. This area will be the first resistance to recapture. Until it does AMC is still bearish. Breaking resistance at the 9 and 21-day moving averages located at $9.66-9.86 will turn the short-term trend bullish. Look for a crossover from the Moving Average Convergence Divergence (MACD) or Directional Movement Index (DMI) to confirm.

Otherwise, initiate shorts or buy put options on a failure to break this $9.66-9.86 resistance. A break means the next target is the top of the triangle at $11.30 and a break out from there brings above $20 as the breakout target. Given the fundamentals underlying AMC, this is pretty optimistic but this stock is highly volatile. Buying a $20 call option for September 17 expiry is going to cost $1.12 per share so plenty of upside for not much downside if r/wallstreetbets return to the fold!

The equivalent Put strike of $1 is trading way cheaper, showing the options market is heavily skewed in favour of calls. Stock options are always favoured toward calls but not to this extent. The current AMC price is $9.51 so an $18 call or a $1 put are close to equidistant from the current AMC share price, ie both are $8 higher or lower. However, the $18 call for September 17 costs $1.25 per share while the $1 put for September 17 costs a mere $0.06 by comparison. 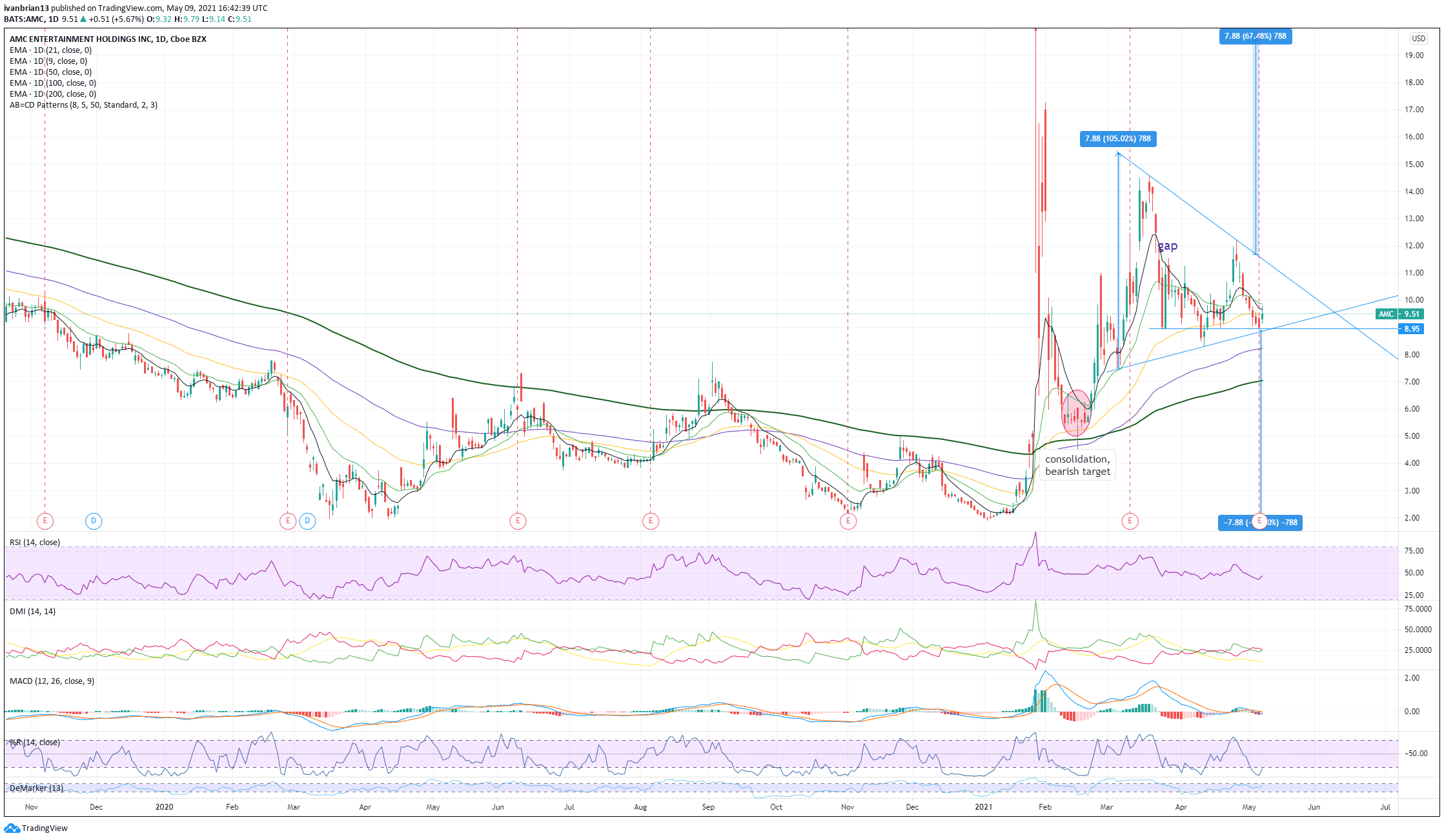